Not enough is being done to guarantee Europeans clean energy. [Filippo Ciappi/Flickr]

The European Commission’s plans to deliver clean energy for all Europeans fail becuase they do not do enough to boost energy efficiency and renewables, writes Dr Yamina Saheb. Only a 40% EU-wide energy efficiency target makes sense.

Russia’s warning of a looming gas crisis in Europe challenges the claimed ambition of the “Clean Energy for All Europeans” package. In fact, the Commission’s proposal, released on November 30th, falls short in securing Europe’s energy future with energy savings and renewables -the only two clean energy sources available in Europe and at an affordable price.

Energy security is defined by the International Energy Agency (IEA) as an uninterrupted availability of energy sources at an affordable price. Europe’s energy security has, so far, been met by increasing import dependency of fossil fuels.

This allowed Europe to compensate for the continuous decline of domestic production of oil, gas and coal.  Russia is the main supplier of high carbon energy sources to Europe. Thus, 34% out of the €261 billion import bill paid by EU citizens and businesses in 2015 went to Russia’s coffers.

Beyond decarbonisation of the EU energy system, the “Clean Energy for All Europeans” package is a unique opportunity to secure Europe’s energy future with domestic, clean and affordable energy sources.

The package is the first occasion to introduce through EU regulations the revolutionary “Efficiency First principle” which calls to “fundamentally rethink energy efficiency and treat it as an energy source on its own right, representing the value of energy saved”.

Unfortunately, the so-called “Impact assessments” behind all the proposals included in the “Clean Energy for All Europeans” package do not fully translate the philosophy behind “Efficiency First Principle”. This is particularly true when it comes to the contribution of energy efficiency to Europe’s energy security.

The Commission’s “impact assessments” include a baseline scenario, called EUCO27. EUCO27 is based on the 27% energy savings target adopted by the European Council in October 2014.

Each of the five scenarios projects the expected primary energy mix in 2030 (see graph at bottom) and provides estimates of the economic, social and environmental impacts. The aim is to select the most cost-effective energy savings target without compromising other EU priorities.

Energy savings are projected by the Commission to be the “first fuel” of Europe in 2030 in each of the five scenarios considered for the revision of the energy savings target. In other words, the expected absolute energy savings is higher than the absolute consumption of any other fuel. If this really takes place, it will be a huge revolution!

However, the modelling methodology creates an artificial competition between efficiency and renewables. Given that the renewables target is considered as a share of the total energy consumption, the moderation of energy demand leads mathematically to a reduction in renewables as well. In practice, this could be true only if the already installed renewables capacity considered in the baseline scenario (EUCO27) is shut down when the demand for energy is reduced as a result of more ambitious energy savings targets.

From an energy security perspective, the only scenario that would make sense for Europe is the one that aims at 40% energy savings target (EUCO+40).

In this scenario, the sum of energy savings and renewables overtake the sum of all fossil fuels and nuclear energy combined. The absolute difference in 2030 between the EU clean and domestic energy sources (renewables and energy savings) and the imported environmental unfriendly energy sources (oil, coal, gas and nuclear) is equivalent to the total energy consumption of France in 2014.

It would have been good to have had the Commission’s proposal on energy efficiency better thought through from energy security perspective.  It is now up to the Parliament and the Council to seize the opportunity and select the energy savings target that would lead to Europe’s energy independence. 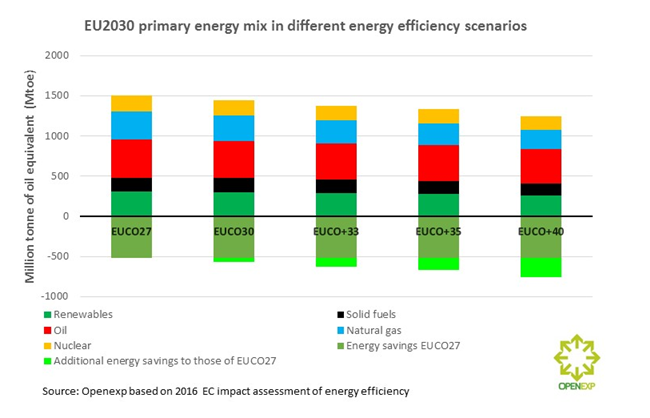