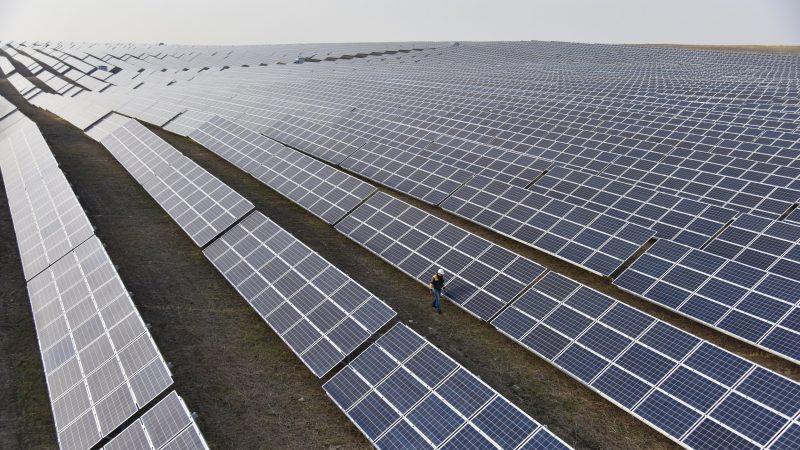 Residents of Wimpassing have voted against the construction of a 52 hectares solar park. [Pavlo Palamarchuk/EPA/EFE]

There are fundamental good reasons to continue protecting the investments covered by the Energy Charter Treaty as private investment will be crucial for the vast infrastructure overhauls needed to shift towards renewable energy, writes Dr Frank Umbach.

The French government has just called on the EU and its other member states to consider a coordinated withdrawal from the Energy Charter Treaty (ECT) due to the political stalemate after three rounds of negotiations for the modernisation of the ECT.

More than 400 energy and climate experts had already called before in an open letter for such a withdrawal from the ECT, a little-known mechanism vitally important for underpinning investment in energy projects.

Signed in 1994, the ECT was originally designed to promote energy cooperation and protect investments in post-Soviet states developing new energy projects. The deal’s 54 signatories, including the EU and all its member states, have recourse to diplomatic channels and arbitration to protect their investments, including in renewable energy projects.

But now some European experts are concerned that the ECT could be used to protect fossil fuels and could scupper the European Green Deal and commitments to reach net zero carbon emissions by 2050.

These fears are misplaced. In fact, the ECT offers crucial protection for green investments and the rule of law, and its cancellation would have no impact on fossil fuel investments in the future.

Some wrongly believe that the ECT allows private companies to sue governments for loss of value to their investments, and if governments were to introduce new limits to the fossil fuel industry, they could be subject to expensive litigation. This is not true.

Leaving the ECT would make absolutely no difference. This is due to a so-called “sunset clause”, under which investors can still sue governments for another 20 years should a signatory leave the deal. The logical solution is to renegotiate and modernise current arrangements rather than to scrap the ECT unilaterally.

There are some fundamental good reasons to continue protecting the investments covered by the ECT. Private investment will be crucial for the vast infrastructure overhauls needed to shift towards renewable energy.

Faster decarbonisation demands more private investment, not less. Increasing the risks for investors by scrapping the ECT will be counter-productive, particularly if they are risk-averse pension funds or those investing on behalf of investment funds.

The great international interest at the ECT is also been highlighted by the further political declaration of the new ’International Energy Charter’ of May 2015, which had been signed by over 65 countries (including the US, Canada, and China) and organisations, including the EU and all EU countries.

Meanwhile, over 90 countries from all continents are involved in the Energy Charter process committed to the observance of its principles of open and non-discriminatory energy markets.

There are further benefits to the ECT which are also going unrecognised. The ECT has long been an important foreign policy instrument of the EU to promote the rule of law in other countries, particularly its neighbours to the east, which rely heavily on their energy sector.

By far the largest investor-state dispute of this kind concerns Russia and Yukos Oil. In 2014, an independent arbitration panel in The Hague ruled unanimously that Yukos Oil was illegally expropriated by the Russian Federation, which was found to have breached its obligations under the ECT.

Compensation of $50 billion was awarded to former Yukos majority shareholders. They are now seeking to enforce the award. Without the ECT, there would be no justice for the investors who were collateral victims of corrupt political decisions by the Kremlin in an effort to silence domestic political opposition.

Another current dispute involves Kazakhstan and American bondholders in Tristan Oil. Under the ECT dispute resolution process, a Swedish arbitration court ruled in 2013 that the Kazakh authorities had orchestrated illegal take-over and nationalisation of the company Tristan Oil following a campaign of harassment by various governmental bodies.

They awarded the former owners and international shareholders of the company approximately US$500 million in compensation and damages. As a result of Kazakhstan’s refusal to pay the award, more than $6bn of sovereign assets were frozen in multiple jurisdictions. Kazakhstan will have no choice but to respect international law.

The ECT is the mechanism allowing investors to deal with these disputes. Without the ECT, it would be impossible to maintain pressure on Kazakhstan or Russia, or any other government, to respect the rule of law and treat international investors fairly. Without the ECT, investing in the energy sector in emerging markets can be extremely risky.

Scrapping the ECT would only lead to more unresolved trade and investment conflicts, encouraging further illegal nationalisation and discouraging private investors. At a time when there is an incredibly large need for private investment in the renewable energy sector to combat climate change, when need the ECT more than ever.

If the EU truly wants to promote green investment, defend the rule of law and fight corruption, supporting and maintaining, the ECT is the only serious option.

2 responses to “The EU should maintain the Energy Charter Treaty”