The Green Deal Should Be Just and Based on Solidarity 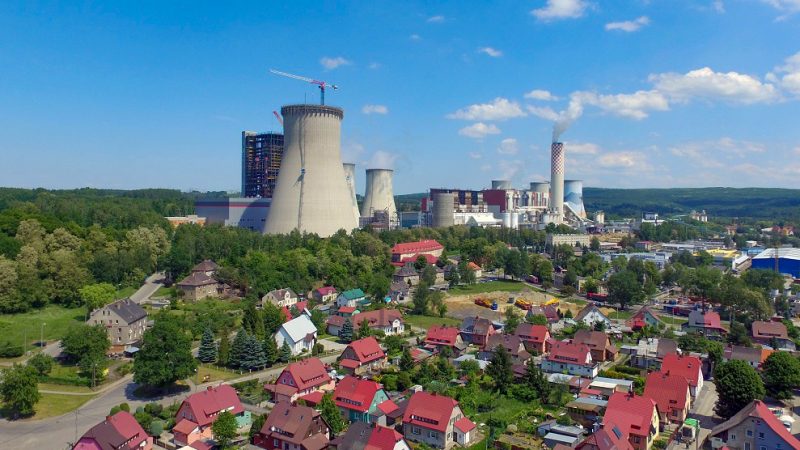 Only a Green Deal that is just, based on solidarity and sensitive to the differences between EU countries has a chance of success. Otherwise, we will see a predatory transition and the failure of the whole project.

“We need to show solidarity with the regions in Europe most affected by the transition, such as the mining regions, so that the Green Deal gains widespread support and has a chance to become a reality” – the words spoken by Frans Timmermans, Executive Vice President of the European Commission, which followed the establishment of the Just Transition Mechanism, permanently defined the nature of the most ambitious climate project in European history.

Poland, where the complete phase-out of coal will take place within 30 years, is definitely one of such economies. The key role in the decarbonisation of the Polish energy sector will be played by PGE Polska Grupa Energetyczna, the country’s largest power producer with a market share of 40%. Ultimately, the company’s business will include electricity generation from renewable sources, low- and zero-carbon heat generation, reliable network infrastructure and modern energy services. An all-out upgrade and conversion to green energy requires a huge financial, organisational, economic and social effort from PGE Group.

In commencing the transformation, the company has already adopted a new strategy that will enable it to achieve 50% share of renewable energy in its portfolio by 2030, and to become fully climate-neutral by 2050. By 2030, the PGE Group intends to build offshore wind farms with a capacity of 2.5GW, photovoltaic farms with a capacity of 3GW and to increase its onshore wind energy portfolio by 1GW.

The implementation of PGE’s ambitious strategy will allow for a fundamental transition of Poland’s power landscape. To better illustrate the scale of this challenge, 2.5GW of the planned offshore wind energy capacity is equivalent to half of the generating capacity of Bełchatów, the largest conventional power plant in all of Europe. The estimated cost of this investment is over EUR 7 billion. The development of offshore projects is the top priority for PGE and an opportunity to decarbonise the Polish economy effectively. By investing in renewable technologies, the company will reduce its CO2 emissions by  120 million tonnes by 2030. However, for this to happen, it is critical that the scale of the energy transition in Poland is fully appreciated and assistance is provided by the European Commission (EC). 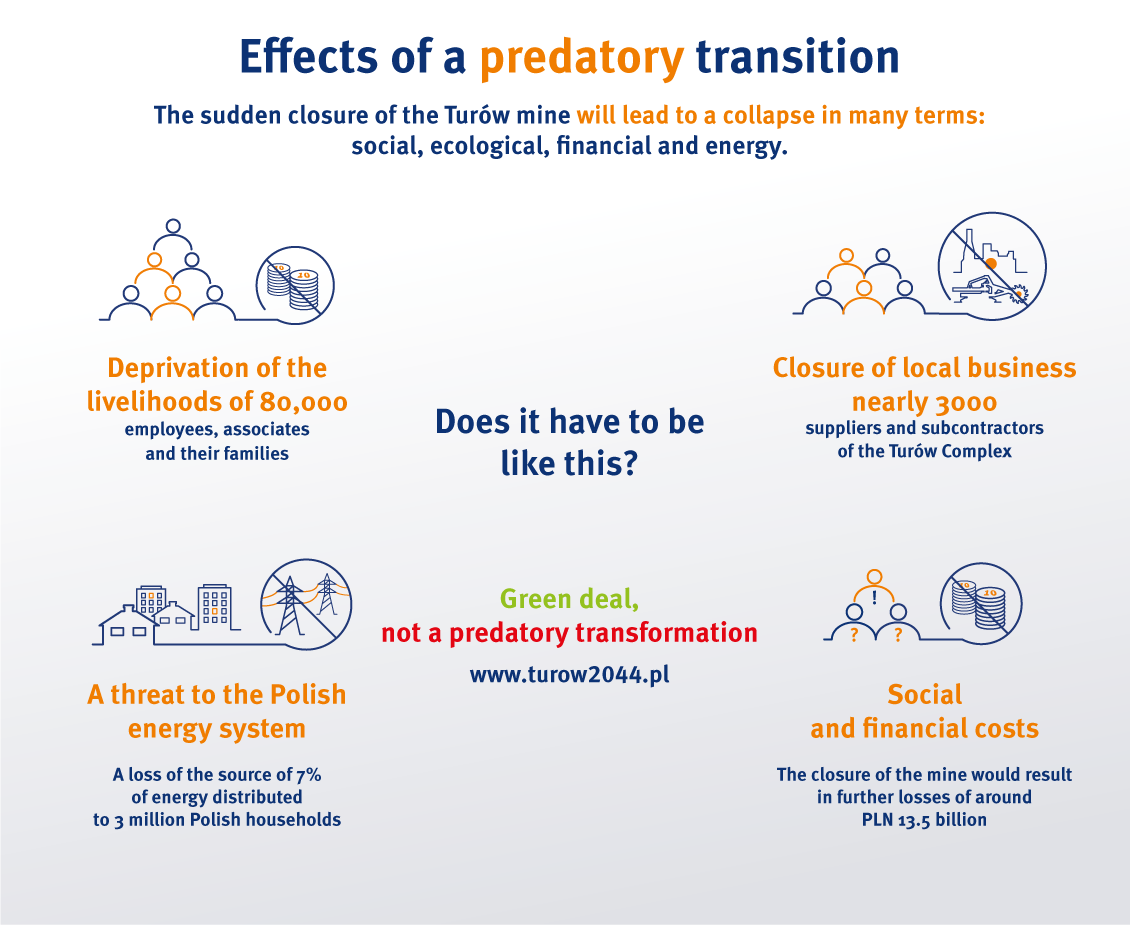 A Fair Green Deal, Not a Predatory Transition

For the European Green Deal to succeed, it must be just and implemented with a sense of solidarity and according to commonly agreed principles. Otherwise, the transition will be predatory and the whole project will inevitably fail.

The Czech government’s international campaign against the PGE Group’s Turów energy complex may lead to such conclusions. The Czech government’s demand for the closure of the mine and its complaint to the CJEU challenge the fundamental assumptions of just transition, carrying a serious risk of the collapse of the Polish power system, as well as the collapse of the entire Polish region neighbouring the Czech Republic and Germany.

The threat of a sudden shutdown of an energy complex that supplies up to 7% of energy consumed in Poland, supplied to 3 million households, raises questions about European solidarity. In practice, the closure of the mine will also mean shutting down the Turów power plant and, as a result, threatening the existence of up to 80,000 Polish citizens who will lose their livelihoods.

The proceedings pending before the Court are a consequence of the Polish Ministry of Climate granting a mining concession to Turów in 2020. The concession extends the mine’s operation and is compliant to Polish and European law. Cross-border consultations between Poland, the Czech Republic and Germany lasted serval years. 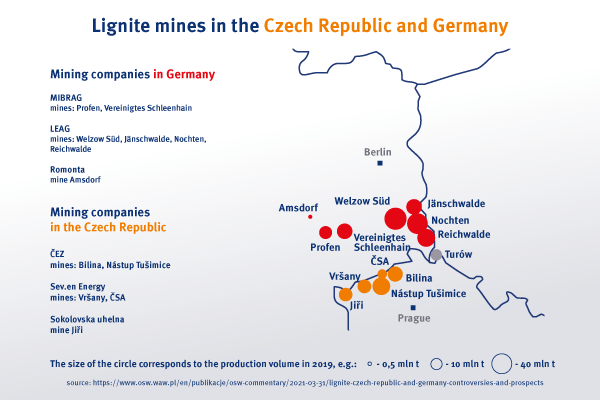 The Czech complaint filed with the CJEU may prove that national interests are placed above the arrangements developed as part of the European Green Deal. This results in unjust treatment of the Polish lignite mine in Turów, whose environmental impact is incomparably smaller than that of the much larger sites still in operation in the Czech Republic and Germany.

Public Acceptance and Success of the Green Deal at Stake

The implementation of the Green Deal requires huge capital expenditures and long-term plans to upgrade the power sector. These plans must take into account the different national energy development models and the feasible pace of just transition. According to the European Commission, it should be completed in a safe and just manner for the affected regions bearing in mind  significant differences between them.

The complaint against the Turów power complex could dangerously destabilise the Polish national power system if the strategic coal reserve designed to ensure energy security were to be eliminated before stable low-carbon base-load generation sources start operating. This might trigger a ‘shock therapy’, i.e. a rapid shift of energy transition costs directly onto the sector’s employees and their families, an outcome all too familiar to the Polish mining sector which suffered similar consequences in 1990. This could undermine Poland’s efforts to gain broad public acceptance of and active participation in the Green Deal.

Today, Polish citizens expect decarbonisation and energy transition even though broad public support for such notions was not at all obvious only a few years ago. PGE Polska Grupa Energetyczna has planned its transition with a commitment to meet the expectations of its customers, who want to live in a clean environment, enjoy energy security and pay acceptable energy prices.

If the European Commission does not lose sight of the common climate target shared by all Member States, PGE Group has a real chance of becoming an energy transition champion in Poland and contributing significantly to the target emission reduction across the European Union.