By Zala Primc | Europe Beyond Coal 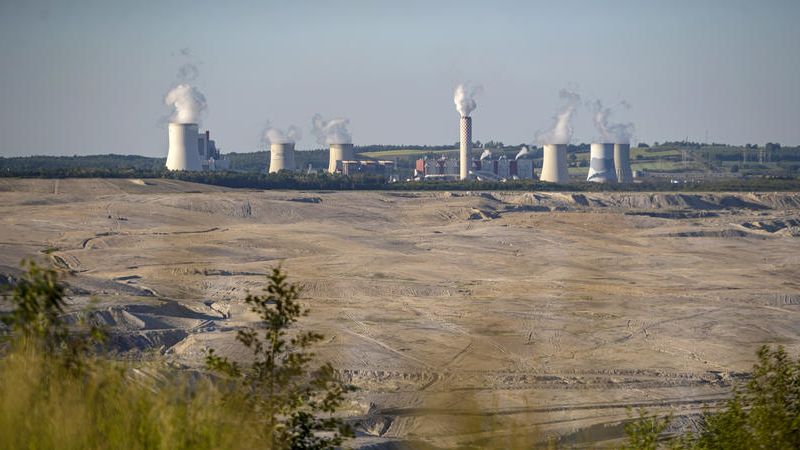 The cooling towers of the coal fired power station near the Turow lignite mine, operated by PGE [Martin Divisek / EPA-EFE]

It’s not too late for Poland’s government to do the right thing by Polish workers and its neighbours and end the dispute over the Turów coal mine by committing to a planned closure of the mine this decade, argues Zala Primc.

Primc is a campaigner at Europe Beyond Coal.

It’s safe to say the Polish government’s relationship with coal is winning it few friends. The Polish government scorched a lot of political capital at COP26 when it committed to a 2030s coal phase-out, signing on to the coal to clean power transition statement only to backtrack and confirm its intention to stick with coal until 2049, a matter of hours later.

Closer to home, the crisis centred around its Turów coal mine rumbles on, with Poland so far racking up €38.5 million in fines for refusing to obey a European Court of Justice (CJEU) order to temporarily halt activities at the site.

Turów operates in breach of EU law and has long been gulping up water in the region, leaving entire Czech villages dry.

The Czech government filed a lawsuit against Poland with the CJEU earlier this year to try and stop the mine from causing further damage to its territory. The court subsequently ordered a pause to operations while it reaches its judgement, expected in spring next year.

Czech and Polish negotiators have tried to strike a backroom deal, with the Polish side seeking an arrangement worth €50 million to Czechia in exchange for the court case being dropped. But this token amount, coupled with a handful of water protection measures that have already been dismissed by experts as ineffective, won’t do anything to remediate the dire situation endured by neighbouring communities in Czechia.

They want credible near-term environmental and legal solutions, a halt to the mine’s expansion, and an equitable future for themselves and their Polish neighbours.

With negotiations between the two parties currently on hold and the CJEU’s ruling drawing ever nearer, the Polish government continues to wrongly portray the court’s temporary halt to operations at Turów as an attempt to immediately and permanently close the mine.

In reality, what is being asked of the Polish government and PGE is to put an end to the Turów water grab and ensure the mine operates in accordance with EU law while a managed closure of the complex is executed this decade.

The two parties needn’t look far for inspiration: the Eastern Greater Poland subregion – home to seven coal mines – is already in line to receive EU support because it plans to be coal-free by 2030. In reality, it will likely exit coal even sooner.

A report by Polish think tank Instrat shows that Poland’s energy grid would continue unhindered should operations at Turów be temporarily halted. It finds the same would be true of a permanent closure in 2026.

Meanwhile, another report shows it would be over €14 billion cheaper to build a renewables-based alternative to the current Turów complex, and far more jobs would be created for the Bogatynia region in the process.

In contrast, the business-as-usual scenario sees Turów’s financial situation worsen as four of its seven subsidies expire by 2025, while the region will miss out on millions of euros in EU transition funds as a result of its failure to instigate its energy transition.

Poland’s coal industry has been in inexorable decline for years, and the government’s full-blown rescue plan for the power sector and the hard coal mining industry is a waste of time and taxpayer money that should be put towards a transition to cheap renewable energy.

The Polish government should take the Turów crisis for what it is: a reckoning and accept that there is no scenario whereby PGE’s plan to continue mining at Turów until 2044 is viable.

No one is demanding that Turów be closed permanently tomorrow. Rather, the Polish government is being presented with a middle ground, a third way, whereby a planned phase-out is carried out this decade, enabling workers to transition to new jobs and local communities in neighbouring countries to regain their basic rights to undamaged water and housing.

With EU and financial sector climate policies tightening, and legal challenges and public pressure for climate action mounting, the cost of clinging to coal continues to pile up. This can be seen reflected in Germany’s decision to scrap its 2038 coal exit plan and target a 2030 coal phase-out instead.

The Polish government’s refusal to respond to coal’s terminal decline hurts Polish taxpayers, coal workers, and neighbours. It’s time for the Polish government and PGE to accept what is staring them squarely in the face, stop breaching EU laws and damaging the surrounding environment, and plan a managed, just transition at Turów that ensures the complex closes this decade.