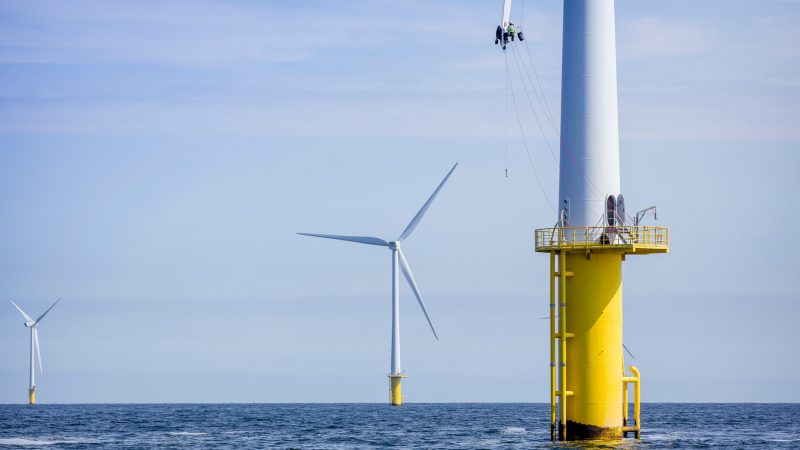 The North Seas regions can provide more cheap electricity than coastal states require and can help reduce the costs of decarbonisation in other countries, write =Simon Skillings and Cora Hewartz. [Vattenfall Nederland / Flickr]

With the COP26 coming up, now is the time for the EU to engage with the UK to set an ambitious political objective that would help accelerate progress in developing offshore wind in the North Seas, write Simon Skillings and Cora Hewartz.

Simon Skillings is a senior associate at E3G, an independent European climate change think tank with a global outlook. Cora Hewartz is a policy adviser at E3G.

EU Energy ministers will meet on 22nd September to discuss the ‘Fit for 55’ energy package. Previously, such discussions would have focused on securing supplies of oil and gas from remote and often volatile countries.

This issue has dominated the geopolitical agenda for much of the last century. Decarbonisation of the European economy offers the prospect of ending this import dependency with energy provided by locally produced renewable electricity.

However, this should not be viewed as a binary switch from total reliance on other countries to complete national self-sufficiency. It would be necessary to build far more renewable capacity and spend far more money if all countries wished to meet their own demand from locally produced renewables.

The case for a single energy market across the EU with renewable resources shared between member states is overwhelming and is on the critical path in achieving climate neutrality.

EU member states have been developing a physically interconnected electricity grid for decades. It has already ensured security of supply and lower electricity costs around the clock.

The shallow and windy northern seas are one of the jewels in the crown of European natural resources. It is in the joint interest of all member states to view this as a shared resource.

The North Seas regions can provide more cheap electricity than coastal states require and can help reduce the costs of decarbonisation in other countries. It is, therefore, an issue of EU-wide significance, delivering benefits to all member states.

However, realising the benefits requires grid infrastructure to transport the electricity and market arrangements that allow it to be efficiently traded.

Technical and regulatory uncertainties stand in the way of fully tapping the renewable potential of the North Sea region – an issue that has been complicated by the UK’s exit from the European Union. Around half of the total offshore wind resources in the North Seas lies in the territorial waters of the UK and Ireland.

The EU must not ignore these resources if it is to deliver the Green Deal objectives. Joint EU and UK development of offshore renewable energy has been included explicitly as an area of close cooperation between the two parties in their Trade and Cooperation Agreement.

The benefits of building an integrated offshore network are enormous. E3G has recently undertaken analysis with consultants from Imperial College which estimates €30-60bn in savings in the period out to 2050. This grid would connect windfarms in EU and UK waters and this linkage is important in delivering savings.

Moreover, fewer transmission lines will be needed, and this has major environmental benefits.

Now is the time for the EU to engage with the UK to set an ambitious political objective that would help accelerate progress in developing offshore wind in the North Seas.

The EU and UK should commit to proceed with a shared offshore network project that connects offshore wind farms in both territories (so-called ‘hybrid interconnector’) in the build-up to the crucial climate conference COP26.

This project needs to be scalable as part of an integrated offshore network and be operational before the end of 2029. It would inject much-needed impetus, requiring the regulatory framework and delivery processes to be quickly defined. It would also demonstrate a clear long-term commitment to offshore wind in the north seas.

The European offshore wind industry, which already employs 62,000 Europeans, would have the confidence to proceed with wind farm development and grow employment. Importantly, it would show political leadership at a time when the EU is asking countries across the globe to make difficult political decisions to help reduce emissions of greenhouse gases in the run up to COP26.

The EU needs a process to engage the UK in the delivery of the Offshore Renewable Energy Strategy. Energy Ministers should lay the foundations for a framework that enables collaboration between the EU and UK on offshore wind at their meeting on 22 September.

Developing North Seas wind resources is too important to leave to bottom-up technocratic processes and needs a clear political signal from European leaders. It is up to European politicians to inject urgency and establish a process to realise the benefits.