It may sound counterintuitive, but the cancellation of Nord Stream 2 might be in Russia’s best interests: the shift from well-tested on-land infrastructure over to the risky undersea pipelines threatens Gazprom’s most valuable asset – the trust of its customers, writes Sergiy Makogon.

Sergiy Makogon is the director-general of GTSOU (Gas TSO of Ukraine).

Nord Stream 2 (NS2) is a solution in search of a problem. If built, this Baltic Sea gas pipeline would contribute precisely nothing to European energy security. It is a small wonder that Poland’s antitrust watchdog recognized the dangers it poses to market competition and fined Gazprom €6.5bn.

On the other side of the Atlantic, the opposition to this perilous project is a matter of bipartisan consensus, as the U.S. Congress contemplates new sanctions to be included in the 2021 National Defense Authorization Act.

If Nord Stream 2 is not stopped now, the security of the EU’s energy supplies will decline and its solidarity will be weakened. Unquestionably, Europe, Germany, Ukraine, and even Russia will be better off without it.

Looking at the 2020-2030 decade, Gazprom estimated its annual sales to Europe at ~200 bcm per year. Coronavirus outbreak has already dampened those projections, but even if we stay with this optimistic scenario, shouldn’t we question the necessity of additional gas infrastructure when the existing transit capacity is 270 bcm per year? 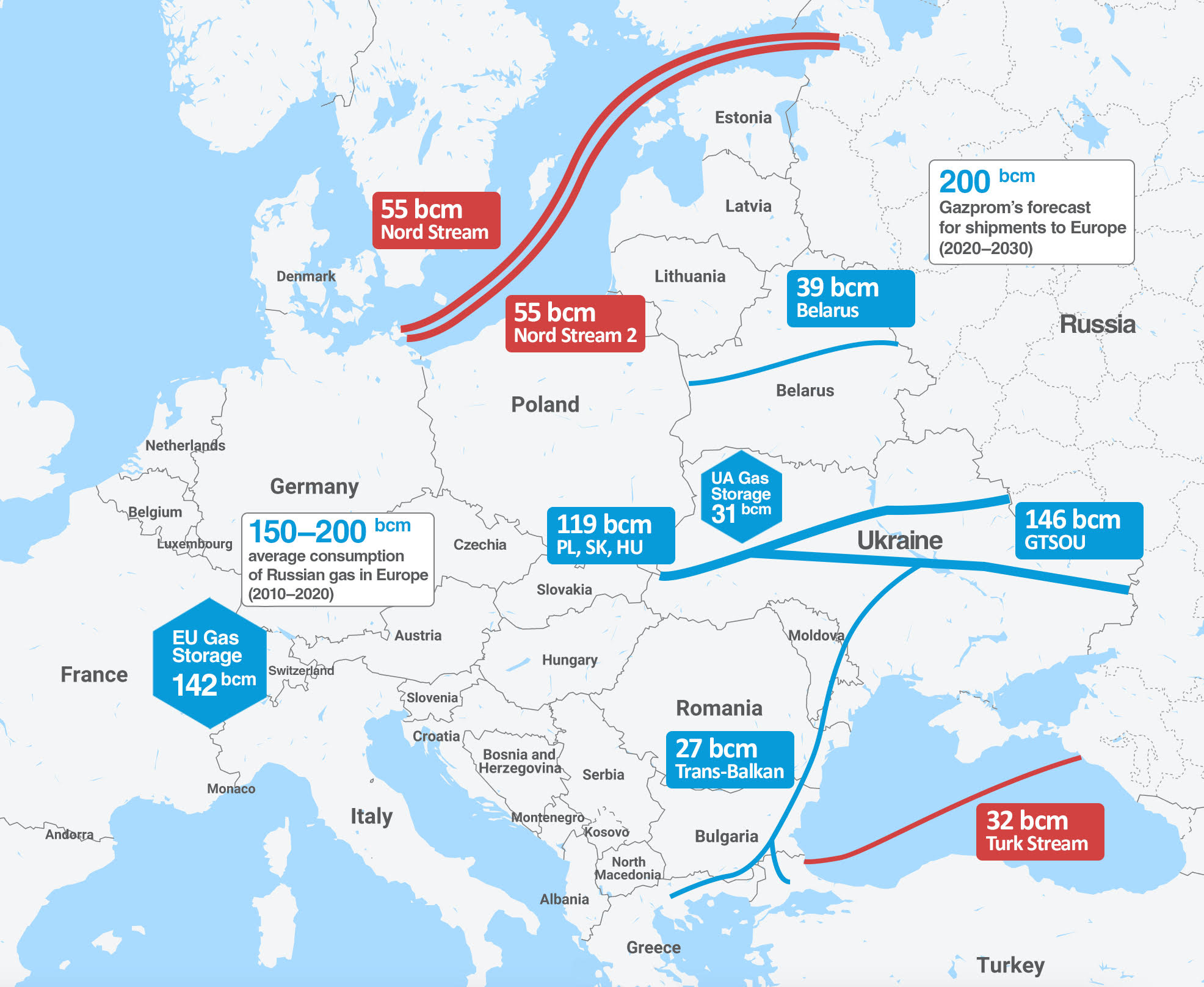 The problem with the current discourse around NS2 is that 146 bcm of Ukraine’s transit capacity is taken for granted. Year after year, Nord Stream 1 suspends operations for regular maintenance that lasts ten days on average.

How will this work in the future, especially in the scenario where the vast majority of Russian gas reaches Europe via undersea pipelines, and on-land infrastructure is scaled back?

All too often, the defenders of the new Russian pipelines forget to mention the orders of magnitude difference in the risk factor for subsea infrastructure. “Repairing a land pipeline takes … 3 or 4 days, and … repairing an offshore pipeline takes weeks.” This is how a German energy analyst, Dr. Frank Umbach, described his concerns with this project.

Surely, our system isn’t immune to incidents and scheduled repairs. The important difference, however, is that Ukraine’s 146 bcm “pipe” is actually a multiplex grid of 4 pipelines with numerous interconnections and exit points. We have proven the reliability of transit through Ukraine time and again.

During the 40 years of transit, we never suspended flow to Europe for technical reasons. Multiple network redundancies complemented by the largest gas storage in Europe are the best guarantee of uninterrupted supplies.

So, either we keep a robust and diversified transit network inclusive of overland and undersea routes or shift towards a system heavily dependent on submarine pipelines. In this scenario, a single company will control direct access to the EU market. That would undermine European supply security and subvert the market competition.

The proponents of Nord Stream 2 often talk about the cost savings. Even if this pans out for Germany, gas prices will likely increase in Eastern Europe, Italy, and the other EU member states.

No matter what models we use in forecasting, it is clear that a dominant market player’s calculus points towards higher prices over time. How much negotiating power will European customers have after Gazprom owns and operates every supply route, and the vendor lock-in takes hold?

The only credible check on monopolistic behavior is the competitive pressure from other suppliers. EU must prioritize diversification of energy sources, not routes.

“Gazprom remains the sole entity with the right to sell natural gas [via pipelines] to markets beyond Russia” states the report on Russia’s market manipulation published by the European Commission on 23 October.

Meanwhile, hundreds of Russia’s own gas producers, including giants such as Navatek, Rosneft, and Lukoil, are shut out of the pipelined gas exports to the EU. The gas producers from Central Asia, which supplied Europe in the early 2000s, could contribute significantly to the continent’s energy security if Gazprom didn’t block their access to pipelines.

If the lower gas prices were the objective, Nord Stream 2 is most certainly not the answer. However, the larger problem with this ill-fated project is not the flimsy commercial justification but a wide range of negative externalities, from the elevated environmental risk to further politicization of energy.

No cost savings could compensate for the damage to European unity, the moral hazard of exemptions to fair competition, and the weakened regional security.

It may sound counterintuitive, but the cancellation of NS2 might be in Russia’s and Gazprom’s best interests too. The shift from well-tested on-land infrastructure over to the risky undersea pipelines threatens Gazprom’s most valuable asset – the trust of its customers.

With the existing transit capacity of 270 bcm/year and the projected transit volume of 200 bcm/year for the decade to come, we should be looking at system optimization rather than wasting resources on a superfluous and geopolitically untenable new infrastructure.

NS2 makes zero economic sense, zero geopolitical sense, and zero environmental sense.  Canceling it, on the other hand, will be a boon for European unity.  Indeed, if the construction stops now, Germany, the EU, Ukraine, and Russia will all be better off.

2 responses to “What if Nord Stream 2 is never completed?”