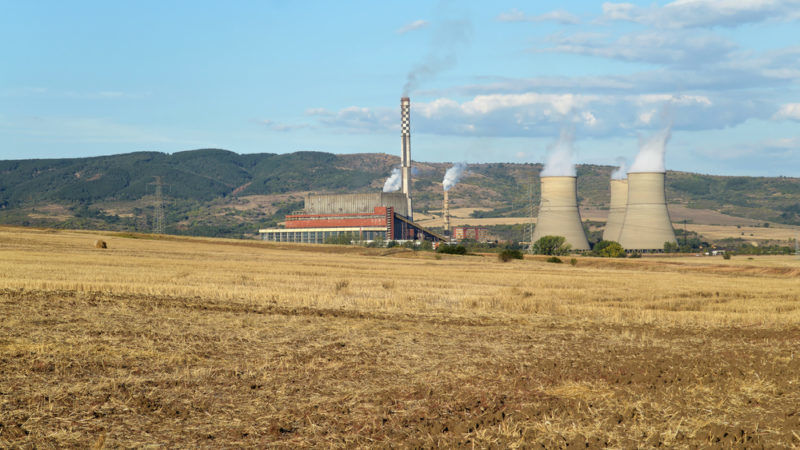 Genady Kondarev is a campaigner at Friends Of The Earth Bulgaria.

The age of coal is fast approaching its inevitable end. There are, however, a few Central and Eastern European strongholds where coal is still regarded as the backbone of economic and industrial existence.

During the last few weeks ahead of a crucial decision today (28 April), one country in particular has been very vocal at both national and European level on this, protesting over new measures on pollution from industrial plants, the so-called LCP BREF.

Almost 50% of Bulgaria’s energy supply comes from old and polluting coal power plants. Almost all these power plants rely on state-owned lignite mines, so it is no surprise that the prospect of new environmental regulations in the coal sector is dominating national debate.

But what is surprising is that though relevant Bulgarian authorities and industry representatives have had almost three years to engage in the consultation process regarding the new LCP BREF, they only started acting in the last possible minute before the vote.

There are no indications that the Bulgarian government and coal industry understand that coal is dying and is already being replaced by cheaper renewables. Politicians and industry experts, heads in the sand, deny that the sector has played its part in history and that it is now time for coal power plants to be phased out.

That’s probably the reason they decided not to participate in the negotiation process for the new LCP BREF which started back in 2014. Moreover, in recent months, there were at least three public discussions about the new LCP BREF in Bulgaria.

But the worst performers in the sector, which will be most affected by the new standards, were absent and did not express any public opinion. The organisers also suspiciously forgot to invite representatives from the NGO sector and civil society.

We are disturbed that the government held such a one-sided discussion on a problem of national importance. Coal power plants are responsible for air pollution that is hugely detrimental to the public health and the environment.

It is unacceptable for representatives of the Bulgarian ministry of environment and water to openly stand by the coal industry at the expense of people’s health and the environment.

The national level communication coming from the ministry of energy points to tremendous investments needed to bring the country’s power plants up to date with the new LCP BREF emission levels.

According to the deputy minister of energy, upgrades would cost more than 1 billion lev (€500 million). As there is no official report on the current technical state of the coal power plants, we are eager to know where this number comes from.

An as yet unpublished analysis, carried out by external experts and commissioned by Greenpeace Bulgaria and Friends of the Earth Bulgaria, shows that this would be the cost only if all existing retrofits had to be built from scratch again.

Our analysis also shows that just a small number of improvements would actually suffice to achieve the new requirements.

In 2017, it seems that all power plants in Bulgaria comply with the Industrial Emissions Directive (IED) – at least on paper. But in reality, some are delaying the update of their operational licenses, claiming technical improvements and retrofits of questionable efficiency, or bypassing sulphur scrubbers and releasing untold emissions into the air.

The IED is a powerful regulatory tool. If implemented and enforced correctly, it can lead to significant and tangible improvement of the environmental performance of polluting coal power plants. The new BREF will only help strengthen these regulations. If Bulgarian authorities care about our health and the environment, they should not oppose them.

The last winter months have demonstrated the unreliability of many of the old coal power plants in Bulgaria. For a few weeks this winter, some of the plants failed to switch on due to frozen coal supplies or frozen cooling water. These power plants receive capacity payments to be ready to switch on in precisely these situations. However, the thermal power plants Bobov dol and Brikel failed to do it.

The much smaller power plant Pernik, which provides heat and electricity to the city of the same name, had to stop for the same technical reasons, leaving the entire city without heating for weeks in -20C conditions. There was no excuse given, nor compensation paid to the consumers – instead they received a full monthly bill for January as though the outage never happened.

Four months later, the failing power plants received their payments while the state didn’t even bother to fine them for a breach of contract.

The list of malpractices in the Bulgarian coal sector could go on forever. The main point is that Bulgaria is one the worst EU performers on air quality and pollution, and fails to protect the interests of the consumers and the health of its citizens.

Bulgaria protects a coal sector that has no long-term vision either for its development or a painless phase-out.

It’s bottom of the class – trying to halt the progress of everyone else and asking for solidarity just because it took a break from making the effort its classmates did.

Our only hope is that the European Commission and rest of the EU member states will take the high road – and bring Bulgaria with them.