Winds of change: How wind energy can help Ukraine and the climate

By Dan Jørgensen and Kadri Simson 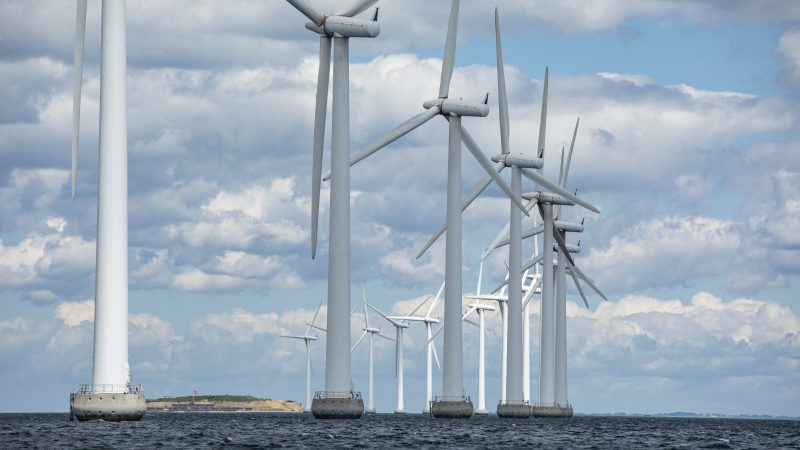 The Middelgrunden wind farm, outside of Copenhagen (Denmark) was the largest offshore wind farm when it was built in 2000. [European Union, 2021]

The European Commission’s ‘REPowerEU’ plan and the recent pledge by Germany, Belgium, the Netherlands and Denmark to reach a capacity of 150 GW offshore wind power are game-changers for the climate and European energy politics, write Kadri Simson and Dan Jørgensen.

Kadri Simson is the European Commission for Energy. Dan Jørgensen is Denmark’s Minister for Climate, Energy and Utilities.

For a millennium, the North Sea was an epicentre of naval conflict – going back to the Viking Age and stretching up to both World Wars. These days however, the powerful winds sweeping the North Sea can help bring peace, prosperity and energy security to the region.

This week, the North Sea Summit was convened in the town of Esbjerg, located on the Danish shore of the North Sea.

31 years ago Denmark built “Vindeby”, the world’s first offshore wind farm. It consisted of 11 turbines – each with a capacity of 0.45 MW that could supply just 200 homes with their electricity demand.

Today, the technology looks very different. The most modern turbines can each generate 30 times as much power and supply the annual electricity demand of 23,000 European homes.

This week, the European Commission unveiled its comprehensive plan to end dependency on Russian fossil energy. Russia’s unforgivable invasion of Ukraine has made it abundantly clear that we cannot rely on a regime that wages war on an innocent neighbour and uses its energy resources as a weapon in the process.

Putting an end to this vulnerability requires both using less energy overall and securing supplies from other sources. The green transition and renewable energy will be at the heart of this momentous shift.

The “REPowerEU” plan therefore has a strong focus on accelerating the use of green energy. To unlock the huge potential of offshore wind, the plan will make the permitting procedures in the EU faster and simpler.

Currently, it can take wind projects up to nine years to get approved in some member states – time we don’t have. The Commission’s proposal will help ease the administrative burden, removing ambiguity in the application of EU legislation and setting out good practices in member states.

Prior to the Russian invasion of Ukraine, the EU relied on Moscow for more than 40% of its natural gas consumption and was using it to heat homes, generate electricity and fuel industry.

There is no simple solution or quick fix to wean the EU off Russian gas. But the fact is that many of the gas heaters used across Europe can be replaced by highly efficient heat pumps, powered by offshore wind or other renewables.

Furthermore, we must increase the production of other – and clean – gasses like hydrogen and biogas from waste.

The main reason is that a number of industrial processes – such as cement, glass and metal production – require very high temperatures or the adjustability of a flame, which cannot be generated by electrical power yet. Some modes of transport are not easy to electrify and are best powered by hydrogen or its derivatives.

In 2050, the 150 GW offshore wind capacity can meet the electricity demand of 230 million homes – exceeding the 190 million European households that we have today.

But by harvesting the abundant offshore wind resources of the North Sea, we can also pave the way for the hydrogen economy. Offshore wind power frequently generates more electricity than is needed. Thus, instead of letting wind turbines idle, we could use the surplus of energy to produce hydrogen.

Today, the hydrogen economy is in its infancy – just as the offshore wind was 30 years ago. However, as both the European Commission and many member states have set ambitious goals for their electrolysis capacity, we are optimistic that hydrogen production will reach maturity in just a few years.

The EU has responded with great resolve to the Russian aggression. But “REPowerEU” and the four countries’ commitment to increase the current offshore wind power capacity 10-fold sets Europe on a path to achieve independence from Russian gas.

It also shows a way forward for other countries around the world to decarbonise their economies and help stem climate change.