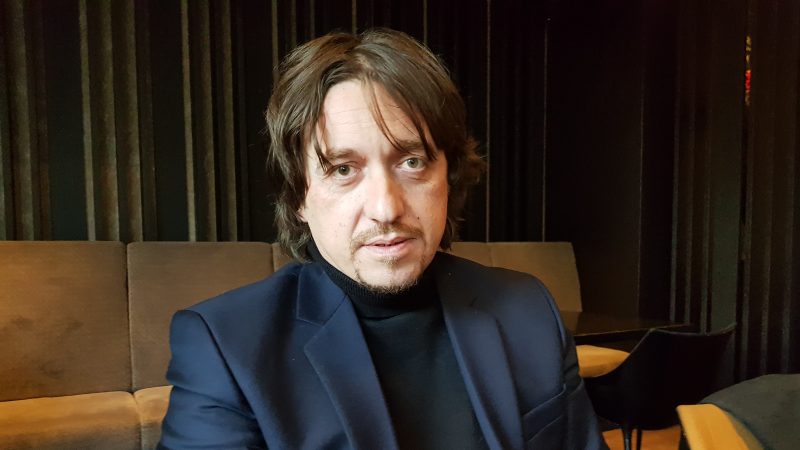 Sergej Sekulović, Minister of Interior of Montenegro, in Brussels on 28 October 2021. [Georgi Gotev]

In an interview with EURACTIV, Montenegro’s Interior Minister Sergej Sekulović discussed Western partners’ concerns about how reliable the new Montenegrin government is, the 2016 alleged coup attempt, the difficult relations with Serbia, and the latest European Commission report on the country’s accession process.

Sergej Sekulović has been the minister of interior in the cabinet of Zdravko Krivokapić since 4 December 2020. He has a master’s degree in human rights and is a civic activist by background.

He spoke to EURACTIV’s Senior Editor Georgi Gotev in Brussels on 28 October.

You are coming from the civil society sector – this is not something very usual for a minister of interior. Do you feel comfortable in your post?

Yes, it’s unusual for someone who comes from the bar and civil society to become a minister of interior. There is a certain conflict of characters. Even though from a psychological point of view I don’t think it concerns me.  But certainly, it’s a challenging task. And because I come from civil society, from Bar, I’m coming with my ideas. I even think this conflict of characters could create an interesting dynamic.

That’s why I’m looking forward to an interesting interview. We read in the press that your Western partners, NATO, the United States, don’t have confidence in the new government. How do you respond?

This is information of a semi-formal character. On one side, I understand the concerns of our Western partners. Because trust is built through actions, and actions must truly demonstrate what are your values. It is true that over the last year the society in Montenegro has been going into what I call a liminal phase. It’s a psychological term. There is no way back. And we don’t know what is ahead of us. And we are in a certain state of social shock.

Because for the first time in 30 years there has been a turn-over in the government. I confirm I agree with the fact that there should be certain monitoring over this government. Because this could only add up to the quality. Montenegro being a small society, with institutions that are weak and not built enough, lacking the culture of political dialogue, it is open to various kinds of influences. And in some sense, unfortunately, we need a further guide. I would interpret it in that way.

So you take this criticism positively?

I see it from a positive perspective. The time is the best indicator. And so is the commitment of this government or any future Montenegrin government, because in the next years, Montenegro will experience several governments, which should show true dedication to democratic values.

I believe that the previous elite has still not come to terms with the fact that they are not the governing majority anymore. And when I said there is no going back to the old ways, I mean there is no going back to the old system of managing the country. Thirty years is a very long period of time. Many people have blended in with the state. They even think the country cannot exist without them. And they think it’s only a matter of moment when they will return. It is a wrong assumption. There is a new dynamic in front of Montenegro. It doesn’t necessarily have to be a positive one, but it is open.

So there is no going back to the old ways, and the new ways need to show the capability of the Montenegrin society to build professional and strong institutions, to take on board the culture of political dialogue and to create an inclusive society where no one will feel discriminated.

When you say there is no going back to the old ways, do you have in mind also the times when Montenegro was one country with Serbia, or the situation before Montenegro became a NATO member?

When I said there is no return to the past, I mainly refer to the government model. The Montenegrin society has to learn how democracy is functioning. With two basic premises: power is limited and replaceable, and it must be subject to scrutiny. I hope that the future won’t in any way be questioning Montenegro’s sovereignty. But it is one of the issues that is burdening Montenegrin society even nowadays. I don’t think it’s closed, unfortunately.

For those who know the history of the Balkans, Montenegro has been for centuries a territory of smuggling and of gangs. Some say former leaders were linked to such schemes. As the minister of interior, how do you see the situation?

Montenegro has a serious problem with organised crime. Undoubtedly organised crime groups are using widespread corruption in the public sector. And breaking those links is the basic task of the Ministry of Interior. If we fail to do so, the Montenegrin society will be enslaved, regardless of who will be in power.

So the risk exists?

And you have a difficult job?

And how do you hope to succeed?

I believe the solution lays in teamwork, in strong coordination of state authorities, which will consist of professionals, people with integrity, who will have the trust of the Western partners’ services. Otherwise, we won’t be able to solve the problems. With coordination from inside, reliable partners from outside, the political will to break down the link between corruption and organised crime, Montenegro has a chance.

How about foreign mafias? Russian mafia?

According to our operational data, they are not a primary problem.

So the problem is your own mafia?

Yes, this is correct, but I would like to add that our mafia, which is our main concern, is also part of a large transnational mafia.

What happened to the investigation regarding the alleged Russian coup attempt of 2016?

The procedure is ongoing under the first-instance authority. The decision has been annulled and there is a court proceeding ongoing at the moment. I would like to refrain from any further comment, in order not to influence the court proceedings.

[In 2019, the Higher Court sentenced 13 people after finding them guilty of plotting to commit ″terrorist acts″, also of “undermining the constitutional order of Montenegro”. In February 2021, the appellate court annulled the first instance verdict on all counts of the indictment.]

Could you say something about the recent tensions with Serbia?

I would like to say that Serbia, based on all its capacities, intellectual, economic, should be the locomotive for the economic developments of the others. On the other hand, Serbia should respect the national identity and dignity of the nations around it.

The Commission has issued its annual ‘Progress reports’ on the countries on their way to EU accession. How do you comment on the report on Montenegro, possibly in its part on justice and home affairs?

My basic conclusion is that the report is quite objective. From the position of the Minister of Interior, I can say that concerning Chapter 24 there are many points where we have been commended. But the report also rightfully indicates that there are many areas where improvement of the current situation is necessary, and that the institutional crisis in the judiciary must be solved through political dialogue, and that the Montenegrin society has to show the capability to solve the most complicated situations in a modern way. And that that doesn’t turn to be a political agreement between political parties, but in society’s interest. That’s the only way for Montenegro to become a serious modern political community.