North Macedonia’s PM: We wish Ukraine good luck but for us, the EU didn’t deliver yet 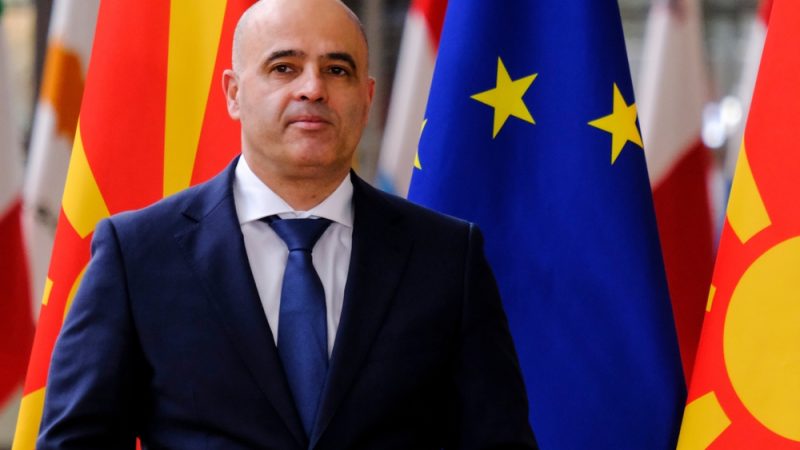 The EU’s stalled accession process has become a security issue amid an increase in the influence of foreign players in the vulnerable Western Balkans region, North Macedonia’s Prime Minister Dimitar Kovačevski told EURACTIV in an interview.

Speaking ahead of an EU summit in late June which is set to debate enlargement, Kovačevski said Skopje had demonstrated its commitment and dedication, through tough decisions, but the EU still has not agreed to open accession talks.

“We cannot make and break our governments before and after every EU summit – it is simply unsustainable,” he said, warning that enlargement is no longer “only a broad question of enlargement for itself, nor is it only a political or economic question”.

“After Russia’s attack on Ukraine, and in light of the influence from third parties in the Western Balkan region, which are the most vulnerable on the European continent, enlargement has become a security question,” Kovačevski told EURACTIV on the sidelines of the GLOBSEC forum in Bratislava.

EU leaders are set to meet with their six Western Balkans counterparts, including two countries already in accession talks and two candidates, on 23 June, before a crucial EU summit meant to discuss Ukraine’s potential candidate status in the bloc.

Albania and North Macedonia, though official candidates, have been in the waiting room for years, blocked by issues of corruption, and asylum as well as, in the case of Skopje, a veto from neighbouring EU member Bulgaria.

“North Macedonia has been an EU candidate country for 17 years, and during these 17 years, we have shown our commitment and our dedication towards this process of integration,” Kovačevski said, adding his country has harmonized 45% of its legislation with the bloc and reorganised its institutions.

“We have made many tough decisions for the country, one of them being the Prespa agreement, with which we were able to solve the name dispute with neighbouring Greece and to become members of NATO,” he said, referring to the landmark 2018 agreement.

“At the same time, the EU didn’t manage to deliver on the start of the negotiations and North Macedonia and Albania are kept practically hostages in the enlargement process, upon request of Bulgaria,” he added.

Sofia has been blocking Skopje’s EU membership path due to disputes over history and the origin of the Macedonian language but faces pressure from its Western allies in the EU to unblock the issue.

Since Bulgaria and North Macedonia signed a landmark friendship agreement in 2017, a joint commission focused on history has been working to bridge their serious historic disagreements.

But according to both countries, there has been no progress on the issue.

“Up to this moment, there is no document which can be agreed by both sides,” Kovačevski confirmed to EURACTIV.

“Historical commissions are nothing new, there are similar ones that work between other countries – between Germany and Poland or between North Macedonia and Greece – which find historical facts and should be the basis between those countries,” he said.

“But they should not be instrumentalised by any of the sides that are working on it, because those sensitive questions can be misused in a political sense and create negative public opinion,” he added.

Concerns that a quick deal with Skopje could unseat Bulgarian Prime Minister Kiril Petkov’s government in Sofia and bring to power a pro-Russian coalition have been mounting in the past few months.

Asked whether the same could be the case in his country, Kovačevski said “this question always seems to come up before an EU summit”.

Kovačevski, however, said it would be important to address worries about the influence of third parties in the region.

“We have seen this influence during the preparation of the Prespa agreement, during the NATO accession process, during the COVID crisis with all its anti-vaxxer campaigns, and we see it always before every EU summit,” he said.

“Always, when the credibility of the EU goes down by not making decisions, the influence of these players and these countries increases, just as nationalism does. That is why the EU has to have a clear strategy, it has to be bolder, in its decision-making process,” he added.

Asked about the reactions if  Ukraine were to be granted candidate status in June, which has often been framed as ‘jumping the queue’ before Western Balkan countries, Kovačevski said “they deserve to fight for their prosperity and for their future in the EU”.

“We can only wish them luck in their EU candidacy aspirations, but the EU has to be aware that it has to deliver, not only promise,” he said.