Supporters of the opposition throw firecrackers against riot police during a protest in Tirana, Albania, 13 May 2019. [Malton Dibra/EPA/EFE]

EU member states are to decide in the coming weeks whether to open membership talks with the fragile Balkan state that sits above Greece on the Adriatic.

But a political crisis is not helping cast Albania as a stable neighbour or healthy addition to a bloc already reeling from populist movements and assorted turmoil.

In February, opposition politicians from the right to the centre-left walked out of parliament in a protest demanding the resignation of Socialist Prime Minister Edi Rama, who has led the country since 2013.

They want a transitional government and early elections, and refuse to negotiate with Rama who they accuse of crime and corruption links.

The fight has spilled onto the streets, with weekly protests shrouding Tirana in tear gas and smoke as protesters tussle with police and try to break into government buildings, lobbing bricks, firecrackers and petrol bombs. 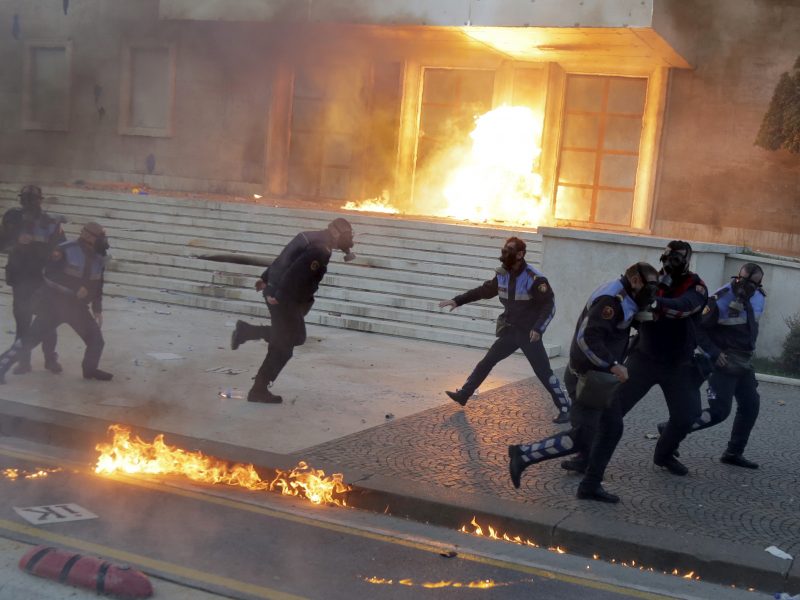 Albanian opposition protesters hurled petrol bombs at the entrance of Prime Minister Edi Rama’s office on Saturday (11 May), after three months of demonstrations calling for him to quit over alleged election fraud and corruption.

The opposition, whose next protest is called for Sunday (2 June), has also vowed to boycott local elections at the end of June.

During a recent rally, the leader of the main right-wing opposition party, Lulzim Basha, urged supporters “to join the insurrection to overthrow Rama”, chanting: “Freedom or death! Democracy or death! I call on you to resist.”

The drama has alarmed Western diplomats, who have issued regular warnings to opposition leaders to curb the violence if they want to see progress with the EU.

“Violent demonstrations are damaging Albania’s democratic reform efforts and the country’s prospects for moving forward on the EU path,” the US embassy said in a statement.

‘Fed up with the circus’

Since the fall of communism in 1991, Albania’s efforts at democracy have been laced with bitter verbal attacks, accusations of corruption and extreme partisanship that has seen the country lurch from crisis to crisis.

“Albania wants to open negotiations with the EU but its political class is unable to start by opening negotiations and dialogue among themselves,” commented Lutfi Dervishi, an independent political analyst.

When they did return — for a brief period before their next boycott — one of the party’s MPs hurled eggs at Rama as he addressed the assembly.

Several months later, another opposition politician splattered the premier with ink before being removed by security guards. After that most of the opposition resigned en masse.

The latest turbulence on the streets is erupting at an especially sensitive moment for Rama, who has staked political capital on pushing Albania closer to its EU dreams.

Speaking about the opposition, he said, “they cannot do anything against the government but they can hurt, and even seriously, Albania in its path.”

But despite some gains, the EU ambassador in Tirana, Luigi Soreca, said he expects the “current political situation” to be one of the elements taken into account by the member states.

“The culture of compromise is not necessarily typical of Albania,” the diplomat added wryly.

“But all parties should now unite behind the objective of EU integration,” he said.

The constant drama also helps fuel disillusionment among citizens, many of whom have joined a huge emigration exodus.

Vera Bala, 49, mother of two children, says many Albanians are tired of the “madness”.

It is “the same actors who replay the same scenes…share the same interests, blame each other but hold each other together.”

“We are fed up with this circus,” she added.