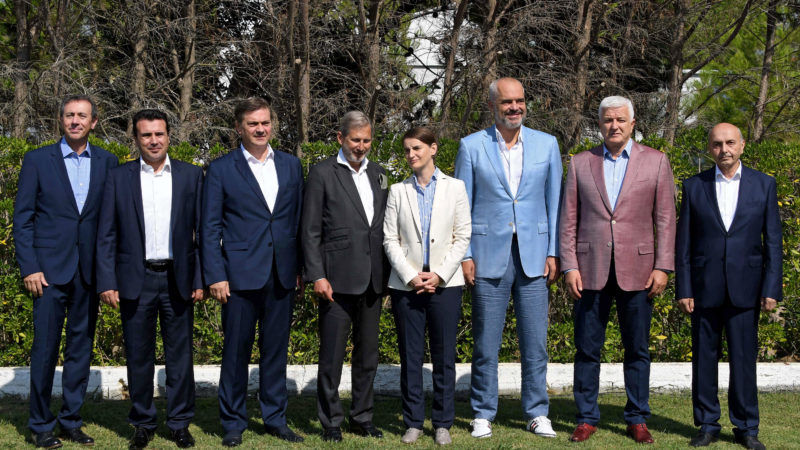 According to the results of the survey unveiled by the Regional Cooperation Council (RCC), Serbia is the least enthusiastic country in the region concerning European integration, while Kosovo’s citizens have the highest opinion of the EU.

The RCC says that in 2015 27% of those polled in the Balkans believed they would join the EU by 2020. In 2016 this opinion was expressed by 24% or respondents, whereas in the latest poll the percentage has dropped to 19%. Meanwhile, 28% of those polled believe that accession will never happen.

RCC Secretary General Goran Svilanović said at the poll’s presentation on 9 October in Brussels that EU officials had often talked about enlargement fatigue among EU citizens and politicians, adding that this survey showed that the citizens of the region had also grown tired of promises and expectations.

“It is now 17 years since the entire process started and people think it’s all taking too long, while their lives have not changed as much as they expected,” said Svilanović.

In his state of the union address, European Commission President Jean-Claude Juncker said that Montenegro and Serbia might join the EU by 2025. He stressed that this is positive and encouraging, because it means there are no alternative policies and that the membership process is unfolding, as far off as it may seem to some, but admitted that people have stopped believing that membership will actually materialise.

The survey revealed that 42% of Balkan citizens consider EU membership a good thing, while 19% disagree. The citizens of Kosovo have the best opinion of the EU, with 90% of those polled saying the EU is a good thing. Serbia sits at te other end of the scale, with just 26% sharing this opinion.

Enlargement as a boost for the economy

There business people are concerned. Just over a half (57%) believe that membership of the EU will have a positive impact on their business, whereas 7% believe the opposite.

Vladimir Gligorov of the Vienna Institute for International Economic Studies said at the report’s presentation that from the standpoint of the economy, education, labour market and the expected lifting of visas, the great support for the EU in Kosovo was understandable. Kosovo’s economy is largely depended on foreign grants, and the possibility of increased opportunities for employment, migration and business is tempting.

“As far as Serbia is concerned, there is a huge difference between what is important for Serbia in economic terms and what the Serbian public thinks of the EU. Serbia is extremely dependent on the EU and that dependence will increase in the economic sense, but in the political sense, the Serbian elite in particular harbours a pretty aggressive anti-European sentiment, and that means that being pro-EU is seen as unpatriotic,” said Gligorov.

European Commission Deputy Director-General for Neighborhood Policy and Negotiations Maciej Popowski said that it was nonetheless encouraging that 42% of the region’s population supported the EU. It may not be a majority but it is still more than in 2016.

Unemployment and the economic situation

The Balkan Barometer 2017 has also shown that most southeast European citizens are not happy with the situation in their own societies. They see unemployment as the biggest problem, but a growing number of them are also worried about corruption.

According to the survey, 67% of citizens of the Balkan region are concerned about unemployment, while 46% are worried about the economic situation. Corruption is one of the main problems for 32% of those polled in the region, as opposed to 27% in 2016 and 15% in 2015. More than half of Balkan citizens (58%) are dissatisfied with the situation in society, while just one in seven is satisfied.

The citizens of all countries of the region highlight unemployment as the biggest economic problem, but the most concerned are the citizens of Bosnia and Herzegovina (73%). Bosnian citizens are also the most dissatisfied with the economic situation in their country (76%) and are the most pessimistic, as 39% thinks the situation will get worse in 2018.

Kosovo is the most optimistic, with half of those polled believing that the economic situation will improve in 2018, and 81% confident they will not lose their job. A much bigger cause for concern in Kosovo, however, is corruption, which is the second most important problem facing the economy in the opinion of 62% of poll respondents, nearly double the percentage in other countries of the region.

According to southeast European citizens, corruption is most present in political parties, followed by the judiciary, health care workers and customs officers, while 73% believe that the authorities’ fight against corruption is ineffective. Vedran Džihić of the Centre for Advanced Studies in South East Europe said at the presentation that there was an enormous lack of faith in state institutions in the Balkan region.

According to the Balkan Barometer, 67% of the region’s citizens have no faith in the judiciary, 71% in the parliament and 69% in the government. In Serbia and Bosnia and Herzegovina the percentage for all of these categories is around 80%. Balkan Barometer respondents in Bosnia trust their government the least, whereas Macedonians trust the judiciary the least.

The Balkan Barometer is an annual survey of the opinions and expectations of citizens and business people in the region. This year’s third edition was conducted on a sample of 8,000 citizens and 1,600 companies.