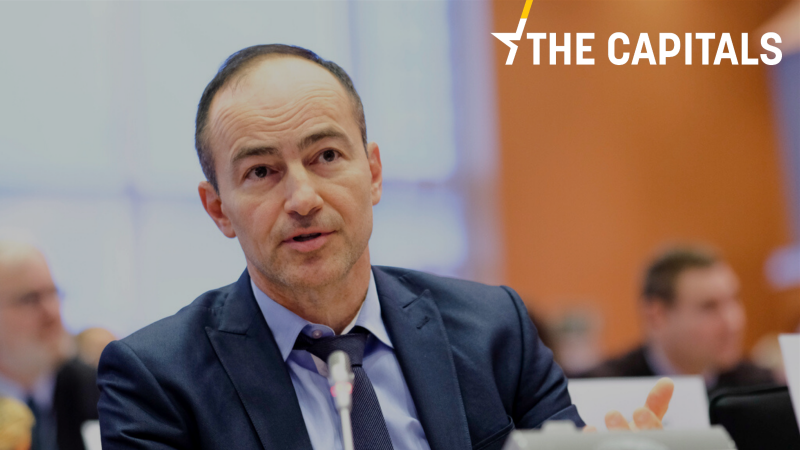 A committee tasked with deciding the common history between Bulgaria and North Macedonia was created under the Neighbourhood Treaty between Sofia and Skopje, which preceded the name-change Prespa Agreement.  [European Parliament]

Before you start reading today’s edition of the Capitals, feel free to have a look at the article “Commission mulls ‘innovative financial solutions’ to back EU media sector” by Samuel Stolton.

MEPs enticed by lure of airline vouchers over refunds. Members of the European Parliament are increasingly siding with the aviation industry’s plans, already backed by many EU countries, to reimburse passengers with vouchers instead of cash refunds. Their support may force the Commission to change the rules, which it has so far resisted. Sam Morgan has the story.

Germany’s massive use of state aid could serve as ‘locomotive’, Vestager says. Germany’s decision to take full advantage of the EU’s relaxed state aid rules could be “a locomotive” for Europe but a strong recovery fund is needed to avoid distortions in the internal market, EU competition chief Margrethe Vestager told MEPs on Monday (4 May). Beatriz Rios reports.

SOFIA. Bulgaria is likely to veto the start of Skopje’s accession talks with the EU due to a lack of progress in the work of a bilateral committee made up of historians, who are in charge of determining the common history of the two countries.

“If the mixed history commission does not resume work by June and the authorities in Skopje continue to falsify history, Bulgaria will not agree to start pre-accession talks with North Macedonia,” MEP and leader of Prime Minister Boyko Borrissov’s GERB party (EPP-affiliated) in the European Parliament, Andrey Kovatchev, told EURACTIV Bulgaria in an exclusive interview on Monday (4 May). Krassen Nikolov has more.

No help for Amazon. The French government has rejected a request for partial unemployment ‘aid’ from US giant Amazon after the online retailer had been asked by a French court to reduce its activities after workers unions claimed employees safety had not been guaranteed to protect them from the COVID-19 pandemic. EURACTIV France looks into why Amazon’s request failed.

Contact tracing enters pilot phase. The National Security Council will meet again on Wednesday morning to discuss the next phase of the exit strategy from the corona crisis, in which all shops should reopen from Monday (11 May). Meanwhile, microbiologist Emmanuel André, one of the experts of the Group of Experts for the Exit Strategy (GEES), has called on people to keep track of who they have been in close contact with from now on. Alexandra Brzozowski has more.

A quiet commemoration ceremony. Every year on Remembrance Day (4 May) at 8pm, the Netherlands commemorates fallen citizens and soldiers who lost their lives since the beginning of World War II in war and during peacekeeping missions. Although citizens were to stay at home, the traditional bugle call – which marks the beginning of the two minute commemorative silence – could be heard from many gardens, windows and balconies throughout the country. EURACTIV’s Davine Janssen has the story.

Rogue advisor. Tourists could be forced to install Austria’s tracing-app “Stopp-Corona” developed by the Red Cross if they want to enter the country, Antonella Mei Pochtler, a close advisor to Chancellor Sebastian Kurz (ÖVP) who worked by his side since he first took in office in 2017, told the Financial Times on Monday, despite the government repeatedly stating the app would remain voluntary. Hours later, the health ministry denied that such an idea had ever been discussed, and emphasised, yet again, that using the app will remain voluntary. (Philipp Grüll | EURACTIV.de)

NATO red flag. Despite Russia’s assertion that it is up to Finland to decide on possible NATO membership, such a decision would still have negative implications for bilateral relations between the two countries, according to a study commissioned by the previous Finnish government. EURACTIV’s Pekka Vänttinen digs deeper.

Gender balance against COVID-19. Italian Prime Minister Giuseppe Conte heeded calls to improve gender balance on a virus task force. Previously, only four women out of 17 experts were asked to join the scientific committee, which pushed 16 female senators to berate the executive in an op-ed that appeared in the Corriere della Sera newspaper.

Meanwhile, car sales slumped by 97.55% in March compared to the same month in 2019, Italy’s transport ministry has said. In the first four months of the year, new car registrations were only 351,611 as figures saw a 50.69% drop compared to the previous year. (Gerardo Fortuna | EURACTIV.com)

Elderly get allocated time slots to go shopping. As part of the government’s de-escalation phase, small businesses and hairdressers under 400 square metres were allowed to open their doors for the first time on Monday since the state of alarm was declared on 14 March.

Shops need to adhere to a strict one customer per employee policy, and clients must make appointments beforehand, either by phone or email. The elderly have their own time slot, which, for over 70-year-olds has to coincide with the time assigned for daily walks. (EFE)

Working with COVID-19’s good students. The Greek government is working on a series of measures to support Greece’s tourism sector and save the summer season. Athens is exploring the possibility of interstate agreements with countries that have good performance in controlling the pandemic, such as Israel, Cyprus and Austria. The deals will focus on the way their citizens would travel to Greece, according to Kathimerini newspaper.

Bilateral agreements are an alternative to an EU-wide one, which according to Athens is preferable but doubtful, and in any case still requires a lot of time to broker. Speaking to CNN, Prime Minister Kyriakos Mitsotakis stressed that in the best case scenario, Greece will launch the summer season as of 1 July. (Sarantis Michalopoulos)

Second stage begins. Poland implemented its second stage of lifting lockdown restrictions on Monday, which included the opening of shopping malls and hotels, and the partial opening of cultural institutions (libraries, museums and art galleries). Starting Wednesday (6 May), nurseries and kindergartens will be opened, although many municipalities oppose this, questioning whether it remains safe enough to open them at this delicate stage of the pandemic.

Meanwhile, it remains unclear whether presidential elections, which are set to be held on 10 May, will go ahead or not. (Łukasz Gadzała | EURACTIV.pl)

Lockdown bans lifted. The Czech government decided to lift its ban on international transport by bus and train as of 11 May and will allow seasonal healthcare and social workers from third countries who have tested negative for the virus to enter the country from next week.

Meanwhile, two airlines will start operating flights from Prague Airport to Amsterdam and  Düsseldorf. “Today, KLM resumed its operations on the direct route Prague-Amsterdam. In the beginning, the service will be operated once a day,” the airport confirmed yesterday. Eurowings will also resume operations on its direct route from Prague to Düsseldorf. (Aneta Zachová | EURACTIV.cz)

Orbán accuses EPP of spreading fake news. Hungarian Prime Minister Viktor Orbán sent a letter to the member party presidents of the European People’s Party (EPP) group, in which he accuses his political opponents and allies alike of spreading fake news about the Hungarian coronavirus law, which enabled the government to rule by decree without set time limits. Vlagyiszlav Makszimov has the full story.

Two stages to start simultaneously. Slovakia will merge two of its lockdown-lifting stages, which were initially supposed to be two weeks apart, because of good health results, Prime Minister Igor Matovič announced on Monday. Zuzana Gabrižová reports from Bratislava.

Romania to switch to ‘state of alert’. Romania will not extend its state of emergency when it expires on 14 May, but replace it with a ‘state of alert’. While the change will allow a mild relaxation of restrictions, people still won’t be allowed to travel in groups larger than three, President Klaus Iohannis said.

While hair salons, museums and dentist offices will be allowed to re-open as of 15 May, under some conditions such as wearing masks, sports facilities will only open for pros as only individual physical activities will be permitted. (EURACTIV.ro)

Tourism relaunch. As of next Monday (11 May), hotels and camps in the western Croatian region Istria (the closest to the Italian border) will be allowed to open. Various services will be reintroduced gradually depending on when the state border will be opened and on market demands, it was decided at a conference call of the Tourism Commission yesterday.

In other news, parliament speaker Gordan Jandroković has received a death threat which he reported to the police, his office confirmed. The office said the threat was connected with the insults Social Democratic Party (SDP) leader Davor Bernardić directed at Jandroković on Sunday (3 May). EURACTIV Croatia’s Karla Junicic reports.

While Vučić had accepted a proposal put forward by some parties, he confirmed that no assemblies would be permitted in May, “especially not outside”. This came after the president previously said elections would take place on 14 or 21 June.

In other news, epidemiologist Predrag Kon said yesterday that despite lifting restrictions imposed by the country’s state of emergency,  people entering the country will have to undergo a 14-day quarantine.

“There will be talks about business people, who have to come for business reasons. Most likely so they don’t have to self-isolate, they will have to prove their health status with a negative coronavirus test that is no more than 72 hours old.” Kon said that he did not expect travellers to fly and arrive in Serbia en masse until measures and the movement of people are agreed at international level. (EURACTIV.rs  betabriefing.com)