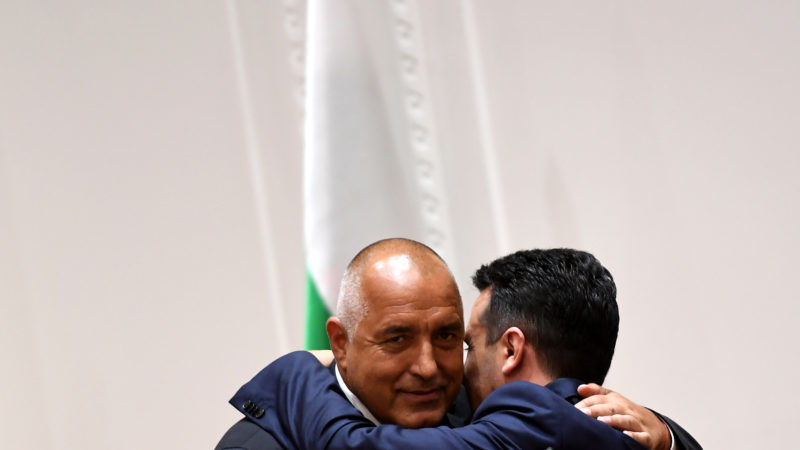 Prime ministers Boyko Borissov and Zoran Zaev met in Skopje to put pen to paper on a treaty that is meant to end years of diplomatic tension and hasten Macedonia along the path to European integration and NATO membership.

Both EU High Representative Federica Mogherini and Commissioner for Enlargement Johannes Hahn welcomed the signing of the ‘Treaty on friendship, good neighbourliness and cooperation’ in Macedonia on Tuesday (1 August).

Both countries have long disagreed over a number of cultural and political issues, including Bulgaria’s unwillingness to recognise the status of the Macedonian language and minority rights.

This new treaty, first proposed by Bulgaria in 2013, most significantly means that both countries will renounce all territorial rights against each other. It also includes a pledge to improve economic ties and a working group will be established that will meet once a year to boost cooperation.

As part of the deal, they also agreed on a research team from both countries to examine the content of school textbooks. The two countries will also work on opening a train line from Sofia to Skopje.

Macedonian leader Zaev told reporters at the ceremony that the treaty is “a joint contribution to political stabilisation between the two countries and the region”.

Neighbourhood Commissioner Johannes Hahn told MEPs today (4 May) that with recent violence in the Macedonian parliament he saw “the impossible”, and then added “but obviously everything is possible” in the country.

Bulgarian counterpart Borissov highlighted how “for the first time, without mediators or somebody telling us what to do, the two states came to a solution”, in a signal to both the EU and the Balkans that the region is capable of solving its disputes bilaterally.

The path was cleared last week when the Bulgarian parliament unanimously supported the treaty. It was less smooth sailing in Macedonia, where the opposition party refused to support parts of the document that addressed national issues.

Nikola Gruevski’s VMRO-DPMNE party’s central committee announced it would not support it “in its present form”.

VMRO-DPMNE believes that the current provisions of the agreement, perhaps not immediately but in one or more years after its signature, during its implementation, Macedonia will be faced with serious problems, the solution of which “will be detrimental to the country”.

Bulgaria’s support for Macedonia’s EU aspirations comes at a lucky time for Skopje, as Sofia is due to take over the rotating presidency of the European Union in January 2018.

Macedonia may have gone some way to bringing Bulgaria on side but it still faces a challenge to secure membership of both international organisations because of its ongoing dispute with Greece over its name.

Greece’s Minister of Foreign Affairs recently told EURACTIV in an interview that “the current government in the country has toned down [the previous rhetoric] and on a communication level it is more correct, let me say. On the substance, however, I have not seen anything new. I am waiting, though.”

Yesterday’s ceremony was marked by the laying of flowers on the tomb of Ottoman-era revolutionary Gotse Delchev, who is revered in both countries.