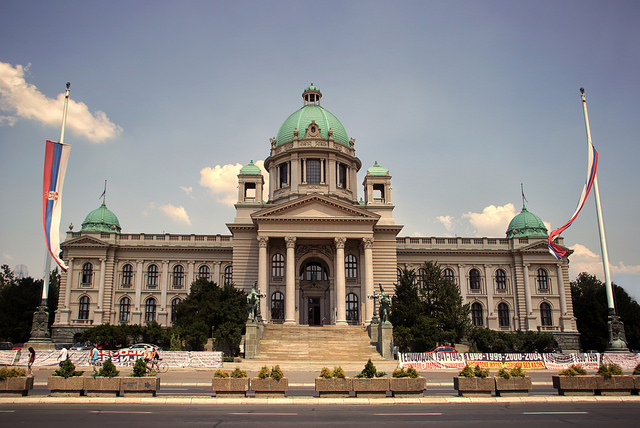 The Serbian national assembly in Belgrade. Critics accuse Tanjug of being close to the Serbian government. [jockeamsterdam/Flickr]

Tanjug, the state-owned news agency in Serbia, is still publishing two months after it should have closed down, in line with EU-backed media reforms. EURACTIV Serbia reports.

According to critics, the case is a blatant example of inconsistent implementation of the law by Belgrade, but also reveals a lack of transparency about the state’s influence in national media.

In fact, not only is Tanjug still supplying news to the majority of the media in Serbia (and a number of other media outlets across the Balkans), but it still conducts interviews with government officials – the very people who in November backed the decision to shutter Tanjug.

“My opinion is that it is possible to engage employees on contract only for (the) finalization of the tasks related to the cease of functioning of Tanjug, and not for the regular production,” media attorney Slobodan Kremenjak told FoNet.

Tanjug is close to the government, and critics fear its survival is a tactic to keep the outlet alive, whilst new state funding is found.

>>Read: Is the EU losing Serbia?

“This means financing from the budget and (a) privileged position on the market,” Vukašin Obradovi?, head of the Independent Journalist’s Association of Serbia (JAS), said in November, when it became clear that there would no attempt to regulate Tanjug.

Until November, Tanjug received some two million euros a year in state aid, and was close to the authorities. It also is a brand from the Communist era, with a rich archive.

Prime Minister Aleksandar Vu?i? stated that month that he was against the closure, saying another solution would be found. Since November, the government has injected 94.25 million dinars (766.000 Euros) into Tanjug.

>>Read: Serbia confirms it will not recognise Kosovo

Tanjug, and other Serbian media, were originally given 15 months for privatisation, but the Tanjug management kept a low profile during that time, neither strongly opposing privatisation in public, nor undergoing serious preparations for privatisation – such as decreasing the number of employees to achieve profitability.

Tanjug employees were not even offered the possibility of taking shares in their company – the preferred solution in the regulations for media that did not find private investors. The authorities blamed the Tanjug management for not filing this request, but so far there have been no consequences.

Now, two months after the supposed shutdown, there is no indication of a deadline for the privatisation process, nor of the legal grounds for Tanjug’s current operations.

“Nobody mentions the main issue, which is that Tanjug can’t pay the salaries of such a large number of employees. f they became private company they would also have to pay for the rent in a building in which they currently operate”, Blic director Veselin Simonovic said.

Serbia’s national business register said last week that Tanjug was still on its Register of Companies, with 90 employees. The culture ministry referred questions about when it might be erased from the register back to Tanjug’s director, Branka Dukic.

Serbia’s Directorate of Property merely said an inventory of Tanjug’s property was ongoing, and the government would decide what happens with it.

?uki? herself told the Journalists’ Association of Serbia that there were numerous tasks to finalise prior to closure, such as an inventory and the financial report for 2015. She also slammed the JAS for not advocating on Tanjug’s behalf, although Tanjug itself did not speak out when other Serbian media closed down after failed privatisations.