Várhelyi spoke at the opening of the second day of the annual assembly organised by the Eastern Partnership Civil Society Forum, the largest umbrella organisation of NGOs from the EU and the six partner countries – Armenia, Azerbaijan, Belarus, Georgia, Moldova and Ukraine.

“We see youth as a new priority” for at least two reasons, the Hungarian Commissioner said.  “First of all, youth is the most active part in civil society. So if we really want to revive civil society in these countries, we need to build on youth.”

Second, “one of my own priorities is to try to create an economy, a sound, reliable, robust economy, for these countries,” emphasised the EU’s new neighbourhood chief. “And in that, youth is the key. Without youth, it’s not possible to create that.”

Várhelyi told the forum, which brought together NGOs, think tanks and journalists, that a lot of the youth have left from the six Eastern Partnership (EaP) countries so his new priority will be to “reattract them, to help them to get back and to get a decent living.”

One key take-away of the new Commissioner at Day 2 of #AA2019 : "We need to do everything to reattract EaP youth to their own countries". pic.twitter.com/V8dcHqdqoR

Várhelyi also gave an early summary of the ‘structured consultation,” in which the Commission gauges the results of the bloc’s engagement in the East, the so-called ’20 deliverables for 2020’ agenda.

While there has been good progress on achieving a stronger economy, society and connectivity, much work remains in strengthening the rule of law and fighting corruption, said the Commissioner.

“In some countries, we see the space for civil society shrinking,” Várhelyi pointed out. “A solid majority of stakeholders including civil society, member states and partner countries, explicitly mention” the need for stronger governance “to achieve more and more lasting results.”

The Commissioner wants to move from financing and supporting to actively engaging with civil society in EaP countries.

“To that effect, the EU will sign framework partnership agreements with the key civil society organisations,” promised Várhelyi. These are designed to allow the Commission to engage more closely with NGOs.

EU officials have been vocal about the need to step up efforts to fight corruption in the East, seeing it as a threat to the policy’s support at home.

“More and more, of course, politicians or citizens will say, well, why should I pay, why should I support Ukraine or other countries if they themselves do not prosecute when money is stolen from them, their own state? Why should I compensate? And that’s a fair question,” said Luc Devigne, director for EaP at the EU’s diplomatic service last month.

The Commissioner also commented on the calls by the three EaP countries with ambitions of joining the EU — Georgia, Moldova and Ukraine — to create an additional format of cooperation within the framework of the partnership to speed up reforms.

The effort, often called the “association trio” as the three countries have signed Association Agreements with the EU, is led by Ukraine.

“These agreements foresee taking over almost 70% of all the EU law, the body of the EU acquis,” said Várhelyi, underlining that this will lead to significant alignment already.

“But of course, if we have additional requests from these countries, we will be more than happy to go further. But the same applies to the other three countries. So it’s not going to be dependent on us. It is always dependent on them.”

The next Eastern Partnership summit, bringing together the leadership of the EU and the six participating countries, is likely to take place in Brussels in June. The last summit was marred by tensions around territorial integrity issues and questions raised by the elections in Ukraine. 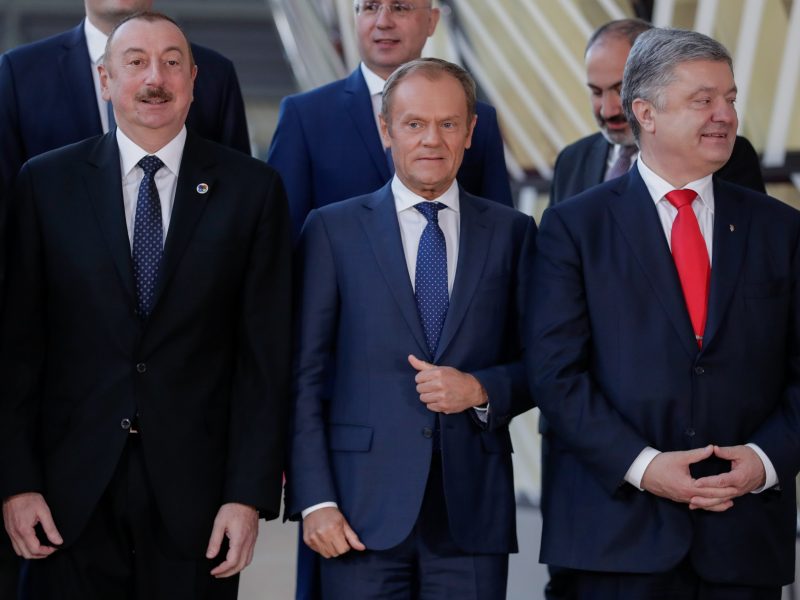 The strategic interests of Ukraine and the EU are “exactly the same”, European Commission President Jean-Claude Juncker said on Tuesday (14 May) on the sidelines of a jubilee summit marking a decade of the Eastern Partnership (EaP) in Brussels.

Várhelyi will be in charge of putting together new priorities for the EU’s policy in the East. “You should put forward a new set of long-term policy objectives for the Eastern Partnership by mid-2020,” the Commission President Ursula von der Leyen wrote in her mission letter to the new neighbourhood chief.