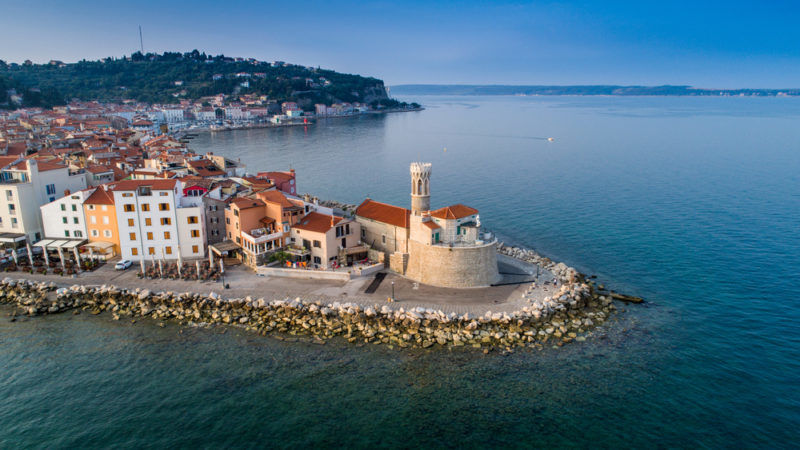 The dispute between the two countries revolves around Slovenia's Bay of Piran. [Shutterstock]

The dispute over the contested northern Adriatic waters and a sliver of land between Zagreb and Ljubljana dates back to the 1991 break-up of Yugoslavia. Slovenia, which joined the EU in 2004, blocked Croatia’s accession talks in 2008 because of the border issue.

The two sides eventually agreed to hand the matter over to the international tribunal in The Hague and the agreement allowed Croatia to resume membership talks and join the bloc in 2013. The deal was included in Croatia’s accession agreement in order to stop Slovenia vetoing its membership.

However, Zagreb confirmed last Thursday (29 June) it will not respect the result handed down by the tribunal. Croatia says the result is null-and-void because the arbitration process was tainted after it emerged in 2015 that a Slovenian official had discussed the case with a member of the arbitration committee. Ljubljana does not contest this charge but still insists that Croatia must stick to the terms of the deal.

Croatia had said well before the result was announced that it had quit the tribunal, convened in 2009, as it was “irrevocably contaminated and compromised”.

The European Commission has said that it will need time to study the tribunal’s decision before commenting on the matter.

Both former Yugoslav republics have laid claim to a small section of water in the Bay of Piran. Slovenia has demanded direct access to international waters which it currently does not have because vessels have to pass through either Italian or Croatian waters first.

Thursday’s ruling grants Slovenia a 10-mile-long ‘junction’, or a sea corridor, that will provide the long-coveted access but it remains unclear how it will be implemented.

This weekend, the authorities in both countries reported incidents in the disputed waters when Croatian fishing vessels entered an area controlled by Slovenian police, according to Total Croatia News.

The prime ministers of both countries, Andrej Plenković and Miro Cerar, are due to discuss the issue face-to-face on 12 July. Slovenia’s Cerar has called the ruling “final and legally binding” for both parties and said “it has to be followed”.

The two prime ministers will be meeting just before a two-day EU-Western Balkans summit in Trieste, which will also host leaders from Germany, France and Italy, and the issue of borders is certain to be on the agenda.

Failure to resolve the border dispute involving two EU members would not bode well for the Western Balkans, where six countries are trying to join the EU and three of them — Serbia, Montenegro and Bosnia — still have unresolved border issues with Croatia.

That means, in theory at least, that Croatia could also hold a veto over the accession of its neighbours.

“Let’s see if the [Croatia-Slovenia border dispute] will be resolved in July, before making any pessimistic conclusions,” one EU diplomat said.

Croatia celebrated its fourth year of EU membership at the weekend but former President Ivo Josipović, who was the head of state at the time of joining, told tportal.hr that the country has not seized the “major opportunity” given to it.

Croatian MEP Tonino Picula (S&D group) cited troubling unemployment statistics and highlighted the large number of young people who leave Croatia every year to find work. However, he added that the prospect of joining the border-free Schengen area was “particularly important”.