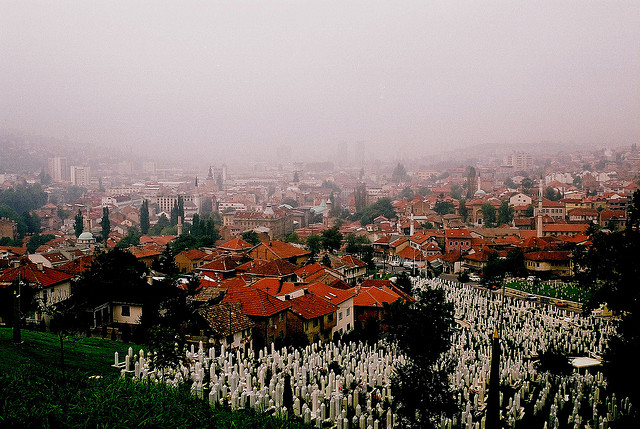 Nationalists with little shared vision of Bosnia and Herzegovina’s future were in the lead in an election for the three-person presidency yesterday (12 October), likely portending more dysfunction in a country still haunted by the divisions of a 1992-95 war.

Based on a partial vote-count, authorities said Bakir Izetbegovi?, Dragan ?ovi? and Željka Cvijanovi? were out in front in the race for the tri-partite state presidency, as the Bosniak, Croat and Serb representatives respectively.

Results of elections for national, regional and local assemblies were expected on Monday. Turnout was 54%.

The presidency steers foreign policy but little else. The results, however, are an indication of the way the parliamentary elections may go too.

Izetbegovic campaigned on the need for a strong, unified state, ?ovi? on the creation of a Croat entity within Bosnia, while Cvijanovi? is part of a Serb bloc that advocates Bosnia’s dissolution.

The presidency is part of an unwieldy system of power-sharing between Bosnia’s former warring sides – Muslim Bosniaks, Orthodox Christian Serbs and Catholic Croats – set down by a 1995 U.S.-brokered accord to end a war in which an estimated 100,000 people died.

The highly decentralised and costly system frequently paralyses decision-making, stifling economic development and efforts to create jobs for an army of unemployed.

Anger over factory closures, joblessness and corruption were at the heart of protests in February that turned violent in an unprecedented bout of civil unrest. Hopes that the violence might spur reform of a broken system quickly evaporated.

“I didn’t vote for anyone; they’re all the same. I just came to cast an empty ballot so they can’t misuse it,” said Sarajevo pensioner Saima Alajbegovi?.

Sunday’s elections were dominated by still-unresolved issues of identity and statehood, and fielded few new faces. The votes for parliament risk being split between many players, raising the prospect of long delays in forming governments at the various levels.

That will only worsen Bosnia’s economic outlook, already hit by devastating floods in May that inflicted damage totalling about €2 billion.

Some analysts fear a repeat of the February violence without radical change.

“I expect that poverty and social problems will increasingly put pressure on politicians to change the way they work, as opposed to coming from their own desire for change,” pollster and political analyst Srdjan Puhalo told state television.

The political system in Bosnia has spawned huge networks of political patronage through government jobs handed out to the party faithful, making change difficult.

“These elections are being won thanks to party foot soldiers, motivated to choose those who are already in power in order to keep their own positions,” said Puhalo.

Limited Western efforts to encourage reform of the political system in Bosnia have run into the sand. Izetbegovi?, leader of the main Bosniak SDA party, vowed an end to the divisions and to kickstart Bosnia’s stalled bid to join NATO and the European Union.

“It’s high time to end the standstill and I think that politicians have matured enough to come out of this vicious cycle,” he said on Sunday.

“In any future coalition, I want to see parties that will have a programme to help take this country out of depression and standstill and put it back on the track of Euro-Atlantic integration.”

“The voters in Bosnia and Herzegovina have voted to elect their representatives in elections which appear to have been conducted in line with technical standards for free and fair elections. The newly elected bodies will face a colossal challenge to reverse the current economic situation and improve social conditions. For this they need and will receive all our support. At the same time, we cannot ignore the fact that this was another second election ignoring the Sejdic and Finci judgments of the European Court of Human Rights, which ask Bosnia and Herzegovina to change its constitution. Yet again, a significant number of citizens of Bosnia and Herzegovina have been deprived of their right to stand for the highest office because they belong to the wrong ethnic group. Bosnia and Herzegovina will receive our support, and it needs to change its constitution soon. A prosperous and stable Bosnia and Herzegovina will require a constitutional and legal set-up that allows all citizens the right to compete in elections for the highest office in the country, and allows its citizens to live with each other, and does not keep them apart.”

Since the end of its 1992-'95 war, Bosnia and Herzegovina has had a weak central government and a system of ethnic quotas that has stifled development.

There have been numerous signs that the country’s main ethnic entities - Serbs, Croats and the Muslims, known as Bosniaks lack interest in pursuing a common future. However, the European Commission continues to encourage the unity of the country.