By Alexandra Brzozowski and Vlad Makszimov | EURACTIV.com reporting from Bosnia-Herzegovina 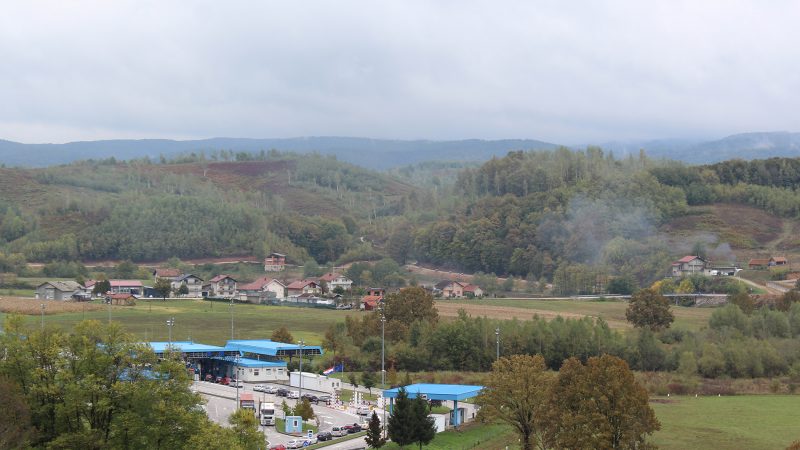 Border crossing between Croatia and Bosnia and Herzegovina, near the city of Velika Kladuša. [Vlagyiszlav Makszimov]

EURACTIV travelled to the Una Sana canton in northwestern Bosnia in mid-October for four days to interview a wide range of institutional and non-governmental actors. People trying to cross the border were also interviewed to present a clearer picture of the migration situation on the EU’s external border.

Recent media reports allege that border police and men in balaclavas have subjected asylum seekers and migrants to mistreatment. Croatia is the EU’s newest member state and shares a long land border with Bosnia, including vast stretches of uninhabited mountainous terrain.

Examples of this treatment include ordering migrants to strip off in cold weather, confiscating their clothing in winter, and even raping men with sticks or batons.

“Some of these reports are shocking,” the EU’s Home Affairs Commissioner Ylva Johansson said after the revelations, adding that she expected a thorough investigation of the issue.

Unprompted, several asylum seekers stranded in Bosnia both outside and inside the migrant camps have shared with EURACTIV identical accounts of rape and abuse by the Croatian police. Some local officials corroborated their accounts.

“The footage that we’ve seen recently, it’s just one location, but we have so many of these locations around,” Jasmin Stambolija, a municipal official in charge of migration in Bihać, where camps are located, told EURACTIV on 8 October.

Bihać, located close to the Croatian border in Western Bosnia, has become one of the main hotspots for migrants from the Middle East and Africa attempting to cross the border.

The local official said “hundreds” of migrants were being pushed back from Croatia. “Very often, they were heavily beaten, their mobile phones and their possessions taken, and then we had to give them medical treatment,” Stambolija said.

According to Stambolija, “this has been going on for three years, it’s nothing new” and “if the public pressure is reduced, they will continue with whatever they were doing.”

“The EU knows about this. It’s not a secret,” he said, adding that “the EU can play dumb as long as they want, but there was a public outcry.”

Hauled up in a dark abandoned building near Velika Kladuša, on the north-westernmost border crossing as temperatures dropped below 10 degrees Celsius, a girl from a family of seven fleeing political persecution in Pakistan said: “Whatever we had, the Croatian police took everything.”

The ethnically Balochi family said their father was abducted by Pakistani special forces, forcing them to flee and seek asylum. But they said that Croatian special police units beat them on 28 September.

Several family members reported being tasered and beaten, and an 11-year-old boy was hit on the head with a broken phone for not understanding instructions given in Croatian to take off his shoes.

“They even didn’t care about the baby,” the girl said, referring to her 1.5-year-old sister, “now she’s mentally traumatised as well, like all of us.”

Another Afghani man said that last winter, he had been stripped down to his underwear and dropped off 40 kilometres from where he attempted to cross the border in Bosnia.

Asked about his many attempts to cross into the European Union, including on the border with Hungary, he said with a tired smile: “Hungarian police good. Croatian police, very, very bad.”

A quarter of pushbacks are violent

Institutional actors on the ground widely acknowledge the violent nature of pushbacks.

“When it comes to pushbacks, we often assist migrants who indicate having been victims of pushbacks, and we see the signs of violence on them, and we continue to assist them,” Laura Lungarotti, the International Organisation for Migration’s Western Balkans coordinator and chief of mission in Bosnia, told EURACTIV.

The Danish Refugee Council’s country director, Hector Carpintero, added that he could confirm “that the injuries that we treat are quite consistent with what they [asylum seekers] report about the violence that has been used against them”.

The humanitarian NGO, which also provides medical assistance inside the camps, recorded more than 7,200 pushbacks between January and the end of September, of which about a quarter reported excessive violence.

Croatia’s Interior Minister Davor Bozinovic had reacted by promising that the police would conduct an investigation. Since then, the ministry said three policemen who belong to a special intervention unit would face disciplinary procedures.

Bozinovic, however, said the investigation related to an earlier incident in June.

EURACTIV asked the Croatian interior ministry to comment on the allegations of police brutality against migrants on the Bosnian border but has received no response by the time of publication.