Special Representative for the Pristina-Belgrade Dialogue Miroslav Lajcak (L) and the President of the Republic of Serbia Aleksandar Vucic (R), during a press conference following an official visit in Belgrade, Serbia, 22 June 2020. [Koca Sulejmanovic/EPA/EFE]

After meeting Serbia’s President Aleksandar Vučić, whose ruling Serbian Progressive Party won a landslide victory in general elections on Sunday, Lajcak said that the future agreement should “solve all issues and be mutually acceptable”.

Serbia is a candidate to join the EU, but the bloc says Belgrade must first resolve its relationship with Kosovo, a former Serbian province that declared independence in 2008, which Belgrade does not recognise.

Talks between them stalled in November 2018 when Kosovo imposed 100% import tariffs on Serbian goods.

“We are proposing a comprehensive deal that would solve all issues once and for all,” Lajcak told a news conference, speaking through an interpreter.

Other conditions for Serbia’s EU membership include reforming the judiciary, improving rule of law and rooting out corruption and organised crime.

On 6 June, Kosovo removed all trade barriers, paving the way for the resumption of talks. But Kosovo remains adamant it wants full recognition of its independence by Belgrade.

“We are entering these talks in good faith,” Vučić said.

Authorities in Pristina have opposed Lajcak’s involvement in the talks as his native Slovakia does not recognise Kosovo’s independence. They prefer to see the United States as the main mediator.

Ethnic Albanians account for 90% of the population of Kosovo, where NATO air bombardment helped drive out Serbian forces during a 1999 war.

Last week, Vučić said he would reject EU membership if Belgrade does not receive concessions in return for recognising Kosovo, and that no solution would be possible without Russia’s consent.

Under the auspices of U.S. negotiator Richard Grenell, delegations from Belgrade and Pristina will meet in Washington on June 27 to discuss economic relations. 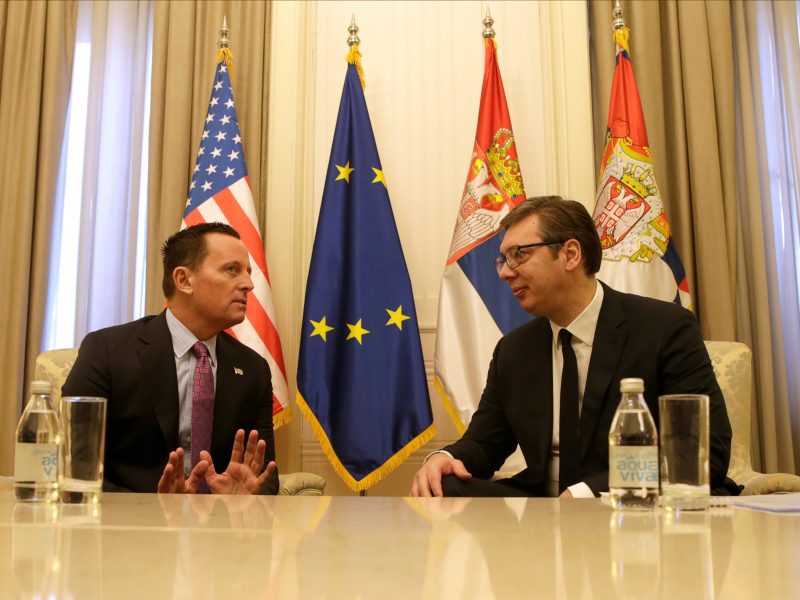