The EU is struggling to maintain credibility in the Balkans after it broke promises to start membership talks with Albania and North Macedonia last October, leading to another postponement despite major reforms on their part.

“I look forward to a frank, intense and open discussion,” Michel said before the meeting began.

EU and Western Balkans leaders are meeting tonight in Brussels.

While most member states were ready to open the negotiations, France has led a small group that vetoed the move, while Germany has led efforts to get the accession process back on track.

“We are going to work today and tomorrow for the next European Council (summit) to open the door to the European perspective of the Balkan countries,” EU foreign policy chief Josep Borrell said on Sunday.

Next month the European Commission is due to publish an individual report for each of the six Western Balkan candidate countries — Albania, Bosnia and Herzegovina, Kosovo, Montenegro, Northern Macedonia and Serbia.

“It’s about engaging in a political dialogue at the highest level” with the Balkan nations “and to understand their expectations, before the summit in Zagreb” on 17 May, a European official said.

What is set to emerge is a more rigorous route to membership, as sought by France.

The EU Commission has already submitted a plan along those lines, but it must still receive unanimous support from the existing 27 European Union member states. 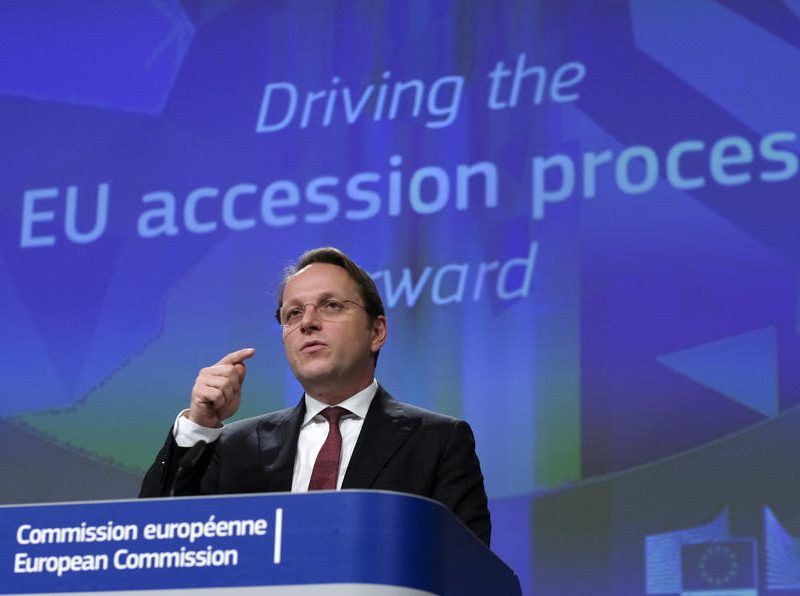 “We have revised our methodology and the methodology in its revised form should create and regain trust in all sides in this process because it’s accelerating the structural reforms,” von der Leyen said.

“On the other hand it’s creating a credible perspective for the Western Balkans to join, over time, the EU. We want also to pave the way for Albania and North Macedonia to start the accession talks with EU if possible for before the Zagreb summit,” she added.

Under the new proposals, the EU accession process would focus on “fundamental reforms” first, and create an option for membership talks to be “put on hold in certain areas… or suspended overall.”

French President Emmanuel Macron said on Saturday in Munich he was ready to open negotiations on EU membership with Albania and North Macedonia if a forthcoming report confirmed enough progress on reforms.

But Macron insisted France was not alone in stalling the countries’ EU hopes.

“Several states were against opening the negotiations with North Macedonia and Albania,” Macron said, rejecting the “French veto” claim.

Albania’s Prime Minister Edi Rama, attending the Brussels meeting, declared himself “very interested to see and discuss the new methodology, see if it can come out as a platform of common understanding with the member states”.

Stormy conditions on Sunday made it difficult for planes flying in and out of Belgium and other European countries.

“We landed with some difficulties, so it’s a kind of signal that the landing for us will not be easy,” quipped Rama.

He wasn’t the only Balkans leader making the connection.

“We had a landing on our fourth attempt… and I made a comparison to our attempt to start the accession talks,” said North Macedonia’s Foreign Minister Nikola Dimitrov.

Bosnia and Herzegovina along with Kosovo are officially categorised as “potential candidates”.