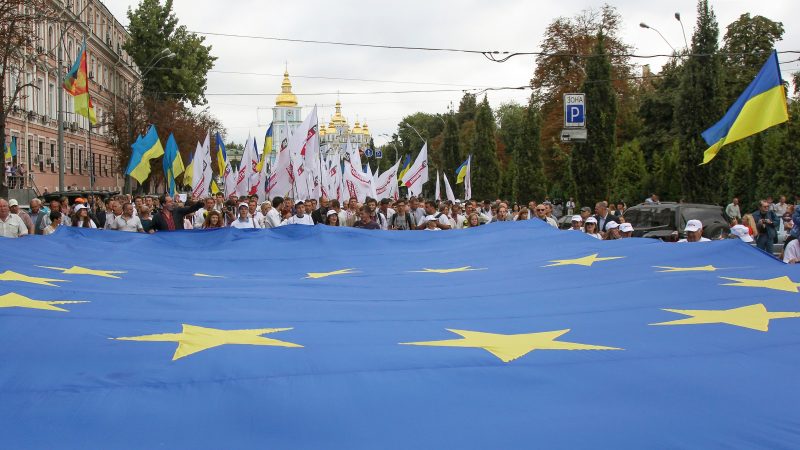 EU leaders are to pledge support but are likely to stop short of offering fast-track EU membership to Ukraine when they meet for an informal summit in Paris on Thursday (10 March), according to a draft statement, seen by EURACTIV.

“Russia’s war of aggression constitutes a tectonic shift in European history,” the draft of the main Versailles declaration of EU leaders prepared for the summit is to say.

Ten days ago, Ukraine’s President Volodymyr Zelenskyy submitted an official request to allow his country to gain ‘immediate’ membership under a special fast-track procedure as it defends itself from a Russian invasion.

Ukraine signed its association agreement with the EU after mass street protests in 2014 overthrew Russia-backed president Viktor Yanukovych, who had sought to revive closer ties with Moscow and put an end to his country’s rapprochement with the EU.

The European Council has asked the European Commission to prepare an opinion, the so-called “avis,” as to the country’s readiness to open negotiations.

A separate statement on the Russian aggression against Ukraine, however, is set to tone down Kyiv’s expectations for a EU candidate status.

Although its latest version notes that “Ukraine belongs to our European family”, a step forward compared to previous versions, it falls short of substantial commitments of candidate status.

“Pending this and without delay, we will further strengthen our bonds and deepen our partnership,” EU leaders prepare to say according to the draft.

At the eve of the summit, EU ambassadors were unable to agree on the wording of the statement, with a split between those wanting more ambitious language on the country’s chances vis a vis Western European resistance to it.

Denmark and the Netherlands are among those currently the strongest opposed to such a step.

Although EU leaders will offer words of strong support to Ukraine to make it clear that its future lies with the EU, instead of membership they are set to discuss boosting Kyiv’s links to the EU single market and to Europe’s energy grid under ideas for enhanced partnership or “association plus plus”, an EU senior official told reporters ahead of the summit.

Any statement or declaration mentioning Article 49 (referring to EU enlargement) in relation to Ukraine would be “a bridge too far”, the official said.

“Leaders are unlikely to offer Ukraine candidate status, it is more likely that there will be more cooperation within the association agreement,” a second EU official told reporters.

“Offering more would be impossible now because this is a country that is now engulfed by war, partially under Russian occupation, and maybe at some point even completely under occupation,” the official said.

They also said that despite pressure from the Eastern European countries, granting Ukraine any fast-track access to the bloc could create problems with other applicants such as Georgia or Moldova – which are not even mentioned in the draft declaration although they both applied just shortly after Kyiv – and those already in the waiting room, like North Macedonia, Albania, Montenegro or Serbia.

Some EU diplomats, however, note that offering EU candidate status to Ukraine would offer a clear “European perspective”, giving the country the hope to fight off the Russian aggression, while not making any firm commitments to accept Ukraine in the future.

“Let’s not be too dogmatic, Turkey has had candidate status since more than two decades and is nowhere near membership, so what are we talking about here,” one EU diplomat told EURACTIV.

“Everyone very well knows the process to full membership could take forever, so it would not harm us in any case but it would mean the world to a country that is on the verge of ceasing to lose everything,” the diplomat added.