“Anchoring the Balkans to a perspective of EU accession is in the interest of the EU,” High Representative Federica Mogherini said in Strasbourg, presenting the strategy to the press before a debate in Parliament.

The strategy makes it even clearer. “This firm, merit-based prospect of EU membership for the Western Balkans is in the Union’s very own political, security and economic interest. It is a geostrategic investment in a stable, strong and united Europe based on common values.”

The EU must not stop at 27 members. The Western Balkans are a part of Europe and we should give them a European perspective for the prosperity and stability of the region. I am optimistic and I believe countries like Serbia and Montenegro can join by 2025.

The elephant in the room: Putin

Mogherini was not shy in responding to a question underlining that Russia clearly has an interest in the region. Others have underscored that Moscow aims to discourage the Western Balkan countries from pursuing NATO and EU membership, which is all the more reason for the EU to step up its engagement in the region.

To that end, Commission President Jean-Claude Juncker, in his State of the Union” address last September, called for a “credible enlargement perspective” for the region, following the European Council decision in March to focus on the Balkans.

But the growing Russian and Chinese influence in the region, which was mired in ethnic conflicts in the 1990s, following Yugoslavia’s collapse, might make it more difficult for the EU to spread its soft power.

“Corruption is rife, owing to organised crime networks that grew out of the communist-era security apparatus. The influence of the United States in the region is declining, even as Russia becomes more revanchist. And, for most of the region’s countries, a big question mark hovers over the path to European Union accession,” Guy Verhofstadt,  president of the Alliance of Liberals and Democrats for Europe Group (ALDE) in the European Parliament, recently said.

In many of these countries, the appetite to join the Union has also decreased. In 2017, the Balkan barometer shows that the Western Balkans’ enthusiasm has waned.

“We Europeans should be more self-confident,” Enlargement Commissioner Johannes Hahn told a press conference. “75% of the business of the region is done with the European Union. Membership with the EU is not just economically driven but it is a commitment to the European values,” he added.

Still, progress towards membership has been slow since the 2003 EU-Western Balkans Thessaloniki Summit, when the EU declared its ‘unequivocal support’ for the region’s EU bid.

Until now only Croatia did become an EU member state. For Albania, Bosnia and Herzegovina (BiH), the former Yugoslav Republic of Macedonia, Kosovo, Montenegro and Serbia the path to accession has been strewn with multiple challenges that have prevented more concrete developments.

Visa-free travel is one the most tangible results of the process. All six now have stabilisation and association agreements (SAA) with the EU. Montenegro and Serbia, currently dubbed ‘frontrunners’, are negotiating multiple chapters of the EU acquis and could join the bloc in 2025 at the earliest.

Apart from the country-specific issues, experts observing the region have identified a number of trends, such as erosion of democracy, rule of law and media freedom, slack economic performance, fast-rising nationalist sentiments, and external influences, all of which require priority action.

This is why the EU executive announced six flagship initiatives to support the transformation efforts of the Western Balkans to strengthen the rule of law, cooperate on security and migration through joint investigating teams and the European Border and coast guard, to mention a few.

“They will have to act with determination. Accession is and will remain a merit-based process fully dependent on the objective progress achieved by each country,’ said Commissioner Hahn, underlining that the countries may catch up or overtake each other depending on progress made.

No tolerance for bilateral disputes

The EU, however, has put down its red lines, beyond the regular acquis [comprising its entire legislation]. There are important bilateral disputes between countries in the region which remain to be solved, reads the strategy.

Those include Serbia’s tense relations with its former province of Kosovo, which declared independence in 2008, but also the name dispute between Macedonia and Greece, as well as borders and issues stemming from the wars of the 1990s.

Events in the Western Balkans may indeed seem peripheral to the EU, particularly as it braces for debates on the new budget and eurozone reform, but let’s not forget the old quote by Winston Churchill: “The Balkans produce more history than they can consume.”

“We will only accept a new member state if it has resolved its conflicts with its neighbours,” Hahn continued, saying the EU will not import bilateral disputes and absorb the instability that could entail.

“Binding solutions must be found and implemented before a country accedes,” the text stressed.

Earlier on Tuesday, MEPs and the European Commission urged visiting Croatian prime minister to solve the border dispute with Slovenia. 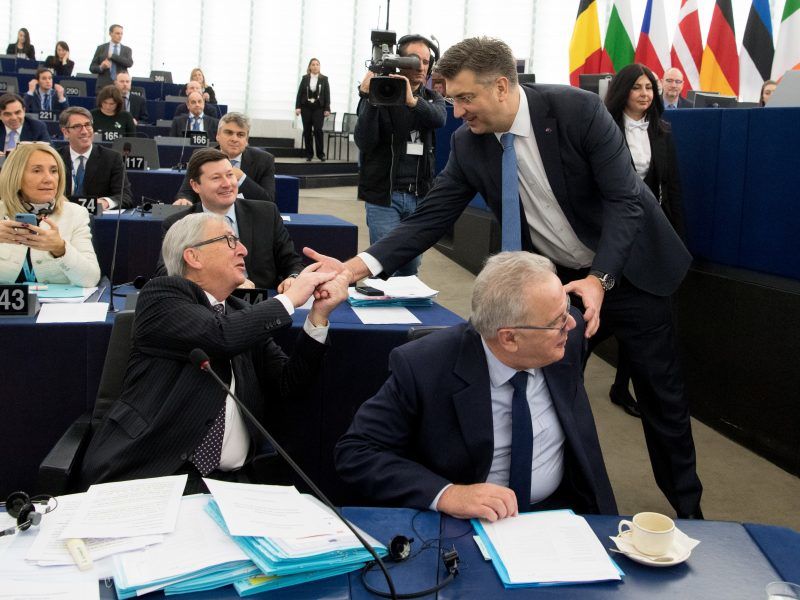 “The so-called Turkey deal is an example of ambiguous EU policy towards accession countries. The Netherlands, which came up with the idea for a refugee deal with Turkey yesterday had to withdraw its ambassador to Ankara. The Commission cannot wait any longer to make it crystal clear to Erdogan that it is his autocratic policies that close Turkey’s door to Europe. Failure to do so will undermine both our credibility and influence over those countries that still want to join the EU,” Schaake added.

President Juncker  will travel to each of the countries of the Western Balkans at the end of this month with a clear message: “Keep reforming and we will keep supporting your European future.”

The diplomatic push will come in May when EU leaders will meet their six Balkan counterparts at a special enlargement summit in Sofia, as the strategy is one of the priorities of the Bulgarian presidency of the EU.

The Ministry of Foreign Affairs of the Republic of Bulgaria said that it "welcomes the Strategy for the Western Balkans. A number of our ideas have found a place in it.

The document recognises the strategic importance of the region for Europe. That is why we are focusing on bringing the region back to the EU's agenda, for the first time in 15 years. For the first time after the Thessaloniki Summit in 2003, in May this year, Bulgaria will bring together all the leaders of Europe and of the region to move faster together towards our common goal.

The strategy applies to all six countries, which should accelerate reforms and build good neighbourly relations. Progress will continue to be based on the individual achievements of each individual country; no country that is ready will have to wait for another."

European Commission:  Strategy for the Western Balkans: EU sets out new flagship initiatives and support for the reform-driven region

European Commission: A credible enlargement perspective for and enhanced EU engagement with the Western Balkans