Despite some progress, EU lawmakers have failed to persuade the opposition to drop its idea of boycotting the upcoming election. [Beta/Miloš Miškov]

The participants of an inter-party dialogue, mediated by European Parliament representatives, have agreed that there are no conditions for a fair and free election in Serbia. But they have not agreed on whether there is enough time to change the situation. EURACTIV Serbia reports.

Despite some progress, the participants have remained resolute in their positions and EU lawmakers have failed to persuade the opposition to drop its idea of boycotting the upcoming election.

The third and final round of the first stage of the inter-party dialogue on improving conditions for the 2020 general election, mediated by the European Parliament, took place in Belgrade on 12-13 December.

The opposition did not join the talks. Earlier, it had announced an election boycott and, although it welcomed the MEPs’ engagement, it said that what Aleksandar Vučić’s regime is offering in terms of conditions for a regular election is a “deception”.

The conclusions from the meeting listed the key areas in which obligations must be turned into results, specifying strictly defined deadlines.

These include improvement of the work of the Regulatory Authority of Electronic Media (REM) through the appointment of new members, the adoption of a new regulation for public media services and its effective implementation, the founding of a Supervisory Committee in the parliament which will oversee the election process, and the application of the adopted amendments to the relevant laws for improving election conditions.

One of the results of the dialogue is the change of general elections’ date from March to end of April or the beginning of May.

This was a decision hailed by Tanja Fajon, the head of the Delegation to the EU-Serbia Stabilization and Association Parliamentary Committee. Fajon said that it was very important that an agreement had been reached on the election date, because there would be enough time for the citizens to gain more confidence in the election and that the election process would be fair and democratic.

“We have agreed that the election will not be held in March, but rather the Serbian president will decide, who is constitutionally authorised to do so, within the framework given to him by the Constitution and the law, on a final date […] in order to enable the implementation of all the conclusions we have agreed in these three rounds of dialogue,” Parliament Speaker Maja Gojković said after the meeting.

After that, Prime Minister Ana Brnabić said that Vučić had been reluctant to set the election date as late as possible according to the law, but had nonetheless agreed because they “work as a team.”

Vučić, however, said that he was not afraid of the competition, that he was a “lenient man” and that the authorities had given more than the opposition had asked for regarding the elections.

Analysts immediately pointed out that this was not a matter of pushing back the election since, according to the law, the election is supposed to be held in April or early May. The latest date for the election allowed by the law is on 3 May.

Asked whether an election in Serbia would be fair if it were held next weekend, EU Parliament mediator Knut Fleckenstein (S&D), he replied that it would not be fair, adding that there were no such conditions currently in place.

European Parliament Rapporteur for Serbia Vladimir Bilčik said that progress in the election process required the implementation of all that had been agreed upon.

He said that in the coming period he would meet with representatives of the European Parliament and the European Commission to discuss how they could support the fulfilment of obligations for the improvement of election conditions in Serbia.

Bilčik added that a short-lasting EU Parliament mission would be formed with the task of monitoring the 2020 election process. 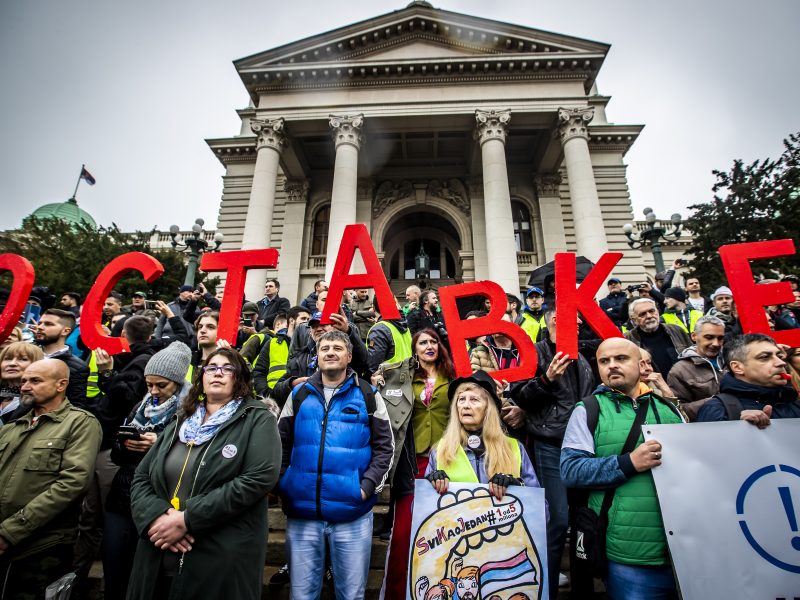 While the dialogue was taking place in Serbia’s parliament building, the opposition Alliance for Serbia blocked the entrances to the Serbian Broadcasting Corporation in order to protest the way in which the state television has been informing the citizens over the last eight years, during which time Vučić’s Serbian Progressive Party has been in power.

One of the leaders of the Alliance for Serbia and People’s Party President Vuk Jeremić reiterated that the bloc remained consistent in its decision not to take part in the election next spring, adding that fair election conditions had to last nine months.

He recalled that more than a year ago, a part of the opposition announced what was necessary for a fair election. He also said that an agreement on fair election conditions could not be overseen by Ana Brnabić’s cabinet, but rather an interim administration of some kind, which would ensure that what has been agreed will be carried out.

The second stage of the dialogue is planned for after the 2020 general election and will focus on the long-term goal of improving the inter-party dialogue in parliament, including the reform of the Rules of Procedure and further changes to the election framework in line with reports by the European Commission and ODIHR.