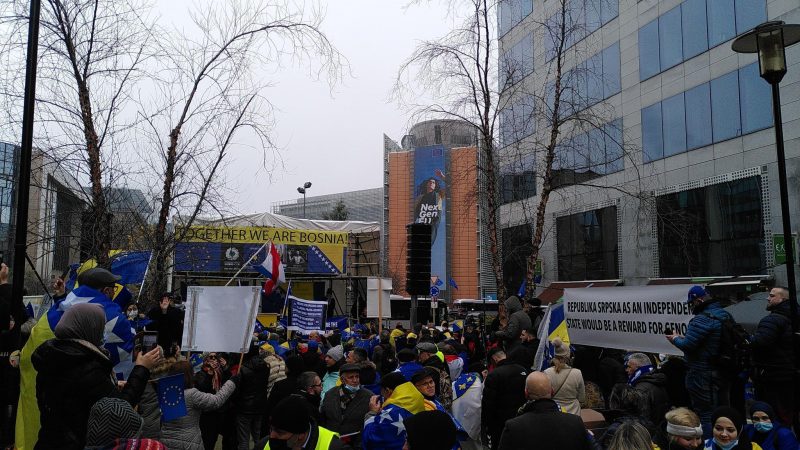 Bosnians protest in Brussels against attempts to break up Bosnia and Herzegovina, January 10. [Vlagyiszlav Makszimov]

Should the situation in Bosnia deteriorate further, the EU disposes of a wide toolbox, including imposing sanctions and reconsidering aid, the bloc’s spokesperson said on Monday (10 January) as hundreds of Bosnians gathered across Europe to call for swift action over the escalating crisis.

The 1992-95 war among Bosniaks (Bosnia Muslims), Croats and Serbs ended with the Dayton peace agreement that created a loose union of the Serb-dominated Republika Srpska (RS) and the Bosniak-Croat Federation within Bosnia and Herzegovina (BiH).

Now the Balkan country is facing what many are calling the greatest instability since the war after the RS entity adopted a roadmap last month to withdraw from key joint institutions, including the military, tax system, and judiciary. The draft laws regulating what many refer to as RS’s step towards secession are to be drawn up within six months.

Some EU member states, spearheaded by the Netherlands and Germany, are calling for sanctions against Serb leader Milorad Dodik, while the US already adopted new sanctions against the secessionist politician last week.

However, Dutch and German flags were the only nationality to be seen besides Bosnian state banners waved amongst what the organisers estimated to be 200-300 protestors gathered in Brussels on Monday.

Protests were also organised in other cities, including Geneva, London, Washington DC, Oslo, Rome, and Stockholm.

“This is our appeal for the people in the European community to stop what is happening, to stop Mr Dodik’s [attempt] at repeating what happened in the 1990s”, Elmir, who came to Brussels from Arnhem in the Netherlands, told EURACTIV.

Meanwhile, RS’s administrative centre Banja Luka on Sunday held celebrations commemorating the 9 January 1992 when some members of the then Socialist Republic of BiH Parliament illegally declared the “Serb Republic of BiH”.

The BiH Constitutional Court had declared this holiday unconstitutional, saying it offends the sentiments of Croats and Bosniaks.

Nevertheless, in an interview with Večernje Novosti, Dodik confirmed his conviction that “RS will one day be an independent state and will have its own federal or confederate status with Serbia”. 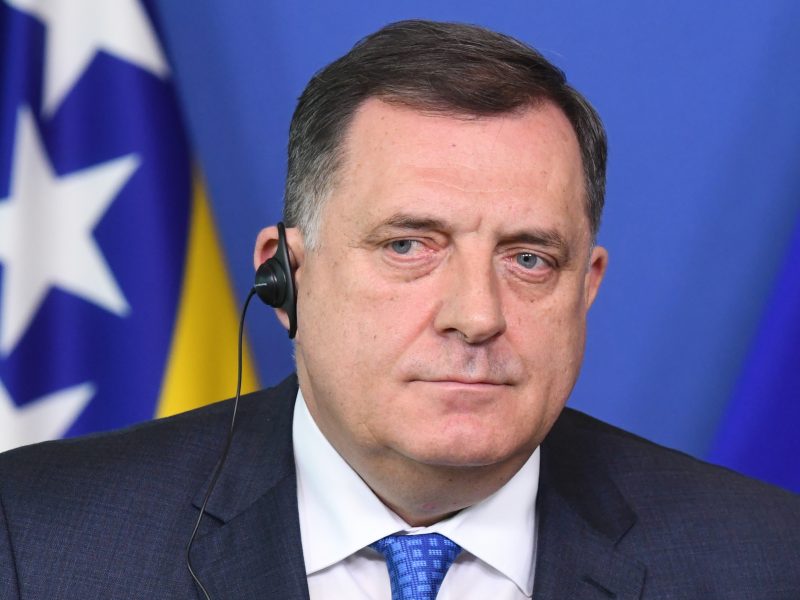 Dodik: Republika Srpska is a state

The ‘RS Day’ is celebrated on 9 January to …

On Monday evening, the EU’s diplomatic arm, the EEAS, came out condemning the statements and celebrations in RS.

“Such rhetoric and actions have further heightened the tensions among communities throughout the country and are further escalating the ongoing political crisis”, the statement reads.

“They jeopardise the stability and prosperity of the country, and are in complete contradiction with its EU perspective, which can only be based on a single, united and sovereign Bosnia and Herzegovina,” it adds.

The EEAS statement said that “the EU also regrets the support brought by other partners to such demonstrations, which threaten regional stability and affect good neighbourly relations”.

“Should the situation further deteriorate, the EU disposes of a wide toolbox, including the existing EU sanctions framework, and a review of the overall EU assistance,” the statement concluded.

Yet, for the moment EU sanctions, which require unanimity, remain unlikely as Dodik enjoys support from Hungary. 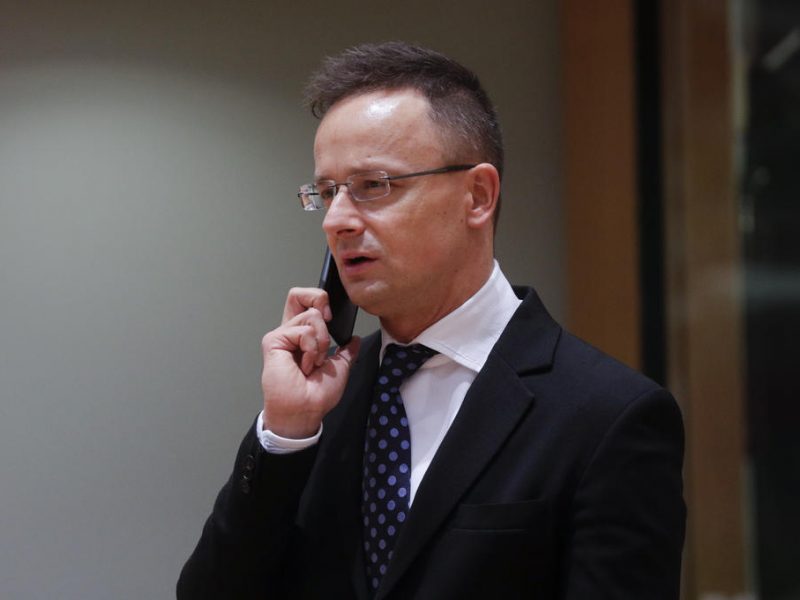 He recalled that the new German foreign minister, Annalena Baerbok, …