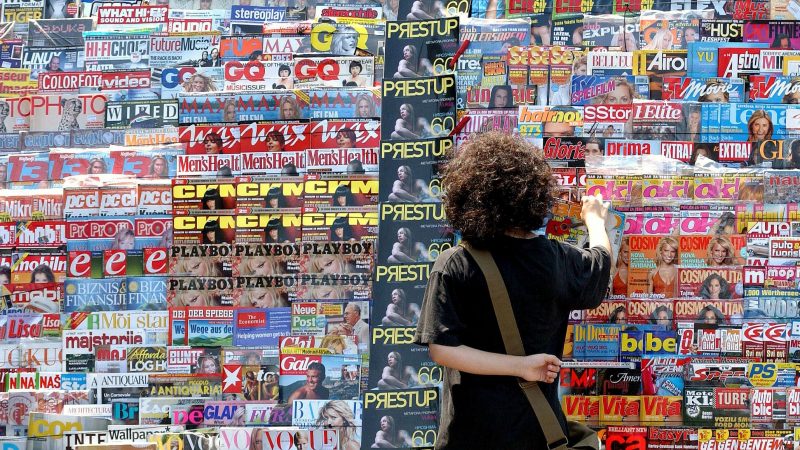 A newspaper stand in Serbia, where experts say media freedom has decreased despite having around 2,600 media outlets. [Shutterstock/bibiphoto]

Amid growing state media capture and decreased journalistic freedom in the Western Balkans, a former chief of the BBC World Service said on Tuesday (12 October) he regrets the closure of the world’s largest international broadcaster in the region.

Speaking at a hybrid conference in the Brussels Press Club, organised by the Balkan Free Media Initiative, Peter Horrocks, who is now a board member of Ofcom, said with self-irony:

“I have probably closed down more journalism in Eastern Europe than the most ambitious authoritarian. I was responsible for closing a number of services, including Bulgaria and Romania, Albania”.

He said this was a “bittersweet decision”.

In 2011 the BBC closed its service in the Balkans after earlier closures of the Croatian, Bulgarian, and Slovenian language services.

In hindsight, this decision appears controversial, if not mistaken.

Antoinette Nikolova, a Bulgarian journalist and the founder and director of BFMI, explained why these three countries were chosen.

In the three countries, Nikolova said, the same techniques were identified: controlling the public and private media via funding, sometimes including EU money, making sure the regulators are weak and dependant on government-disbursed funding, and preserving opacity of media ownership.

No real media market in Serbia

According to Tamara Filipovic from the Independent Journalists Association of Serbia (NUNS), the biggest problem with Serbian media is the absence of a real media market due to significant state interference.

“Media are discriminated against in access to public advertising. The institutions and the public enterprises do not want to declare how much they pay for advertising in the media,” Filipovic said.

She mentioned the 2014 adoption of new media laws concerning the privatisation of some 80 media that were state-controlled and owned. State-owned media was bought by proxies close to the ruling SNS party and were later compensated with public money through advertising, Filipovic said.

She added that the law was misused even though it was adopted after consulting the EU and getting the green light from Brussels.

Filipovic also talked about the fragmented media market in Serbia, where there are 2,600 media outlets but only a handful of independent media. Serbs usually get their information from the television, and most of the TV channels are paying lip service to Vucic, she added.

No ideological restrains in North Macedonia

His example concerned Sitel TV, the most prominent national TV channel. It was established by a politician and businessman who was the leader of the socialist party and a close friend of Serbian dictator Slobodan Milosevic.

“They have no ideological restraints. They serve as propaganda machines of the government. All the time they are with those in power,” Selmani added.

He said there was little difference between the former nationalist government of Nikola Gruevski and the present cabinet of Zoran Zaev.

Selmani added that during his 11 years in power, Gruevski spent €30 million on media, while the present government has disbursed €8 million in three years. It’s impossible, he said, to receive information about what exactly the money was spent on.

Selmani added that the government’s aim was not to help the media become more professional but to control editorial policy and prevent criticism.

The worsening situation in Bulgaria

Radan Kanev, a Bulgarian MEP from Democrats for Strong Bulgaria, offered a grim description of the media situation in his country. His party is affiliated with the European People’s Party but critical of fellow EPP member GERB, the party of former Prime Minister Boyko Borissov,

Kanev said we should question why media freedom deteriorated after EU accession and continues to do so. He did not believe that the end of Borissov’s 11-year rule in Bulgaria would necessarily end media censorship.

“Once we have a stable government again, many things will become the same,” he said. Bulgarians will vote for the third time this year to elect a parliament on 14 November.

The MEP argued that the EU needs to stop letting governments decide which media get the EU funding for advertising the EU’s programmes, policies and tenders. He stressed that the Commission should allocate those funds.

Albania which was not covered in the event, but that has also lost a BBC outpost, ranks at 84 on the World Press Freedom Index. Issues over ownership plurality, censorship, and pressure from the government, have caused it to fall eight places since 2018.

The shade of Berlusconi

Peter Whitehead from the Media Development Investment Fund (MDIF) said the malpractices described are not limited to the examined countries, which are merely “great examples” of what is happening elsewhere in the EU and the accession countries.

“We have seen many examples of regulators being controlled by the state, public broadcasters being captured by the state, soft censorship – allegation of state funding and EU funding to media that are friendly towards the authorities and taken away from independent ones”, he said.

Andrea Bonnani, an editorialist at La Repubblica and a correspondent for Italian media in Brussels for 30 years, told the audience about the damage for the media from Silvio Berlusconi’s era, which has also contaminated the media landscape in other countries.

Today, he argued, the Berlusconi media model, which nurtures a vulgar subculture, is used by populists in Italy and other countries.

Many media in the Balkan countries have been widely inspired by the Berlusconi model, which among other things, transformed information into infotainment, replacing serious journalism with a tabloid version that relies on click baits and even fake news.