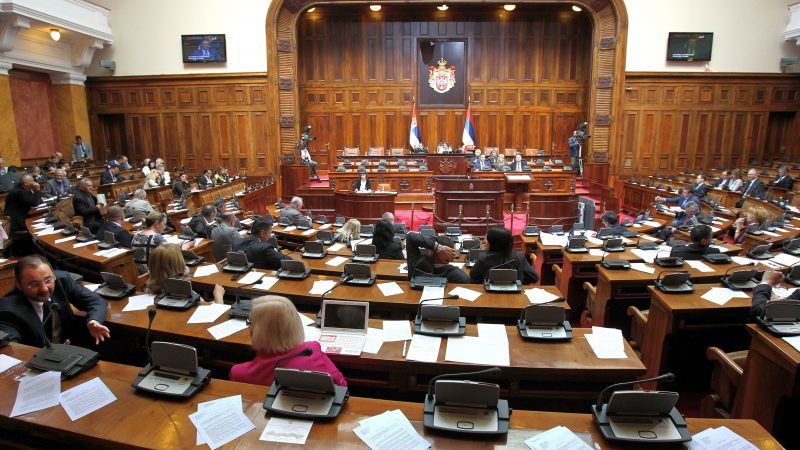 Deputies in the Serbian national assembly in Belgrade. [BETAPHOTO/Nenad Petrović]

The work of Serbia’s parliament reflects the general trend of the ‘capture’ of state institutions by the ruling party, while filibustering and avoidance of public debates have become common practice in the current parliament, notes the latest civil society report on the Balkan country’s progress on the rule of law. EURACTIV Serbia reports.

The ruling coalition, led by the conservative Serbian Progressive Party (SNS), uses several mechanisms to ensure swift adoption of executive decisions and policy measures, underlines the report titled ‘Alarm: Serbia’s Progress in Chapters 23 and 24’, put together by the prEUgovor coalition.

Chapter 23 of the EU accession talks refers to the judiciary and fundamental rights, while 24 pertains to justice, freedom and security. Both are key for Serbia’s progress towards membership of the bloc.

But the report also warns that Serbia is stagnating or even backsliding on the key reforms in the rule of law, and the stagnation is largely being justified by the accession process.

According to the Alarm report, the Serbian parliament has continued to accept the government’s proposals to pass laws in a fast-track procedure. In the April-September 2018 period, to which the report pertains, 82 laws were passed, with 28 of them in an expedited procedure, as per the government’s request.

The parliament also continued to accept drafts that had not undergone a public debate, even though public debates are obligatory according to the Law on Public Administration.

According to the prEUgovor coalition, examples of that are amendments to the Law on the Security Information Agency and the Law on Special Terms of Project of Housing Construction for Members of Security Forces.

Methods of obstructing the parliament’s work include the bundling of different laws into one single item on the agenda and wasting the time designated for the MPs debate by reading out hundreds of amendments.

According to the report, since the annual budget was adopted in December 2017, it has become a regular occurrence for ruling majority MPs to submit hundreds of near identical amendments in order to cut short the time for debating. When that time has passed, the amendments are usually withdrawn.

Civil society warns that the practice prevents constructive debate on a large number of legal acts.

The report further says that even when public debates on legal amendments were organised, they were not announced in a timely and adequate manner, with a very brief exchange of opinions.

“Public debates resembled a simulation of democratic procedures, rather than an inclusive consultative procedure,” reads the report by the prEUgovor coalition, which gathers seven civil society organisations and monitors the implementation of policies pertaining to the negotiations between Serbia and the EU, with a special emphasis on chapters 23 and 24.

According to the report, the government and parliament abuse the negotiation process and the fact that Serbia is currently being allowed to cut some corners where reforms are concerned, for the sake of wrapping up the dialogue with Kosovo, its former province whose independence Belgrade, as well as 5 EU countries, does not recognise.

The report also highlights attempts to adopt laws that are worse than existing ones, including constitutional amendments that are not conducive to having an independent judiciary free from political influence.

Examples of that are the Bill on Information of Public Importance, which will limit citizens’ rights to be informed about the work of state-owned companies, the Bill on Free Legal Aid, which will jeopardise the rights of individuals using the services of organisations that already provide legal aid, and the Bill on Corruption Prevention, which is a step back compared to the previous version.

Although Serbian officials say reaching a comprehensive agreement with Kosovo is “the mother of all conditions” for EU membership, all EU documents and officials point out that all other issues, especially reforms in the rule of law, are equally important.

In the accession negotiations, Serbia has so far opened 14 chapters and temporarily closed two. Seven chapters are technically ready for opening and Belgrade officials hope they will open three or four of them at the Serbia-EU Intergovernmental Conference in December.

How many chapters will actually be opened is up to the EU and the decision will certainly be influenced by the report on Serbia’s progress in the rule of law in the past six months.

The European Commission reports to the Council twice a year on progress in the talks, with particular emphasis on Chapters 23 and 24.