The Swiss city of Geneva is refusing to remove a photograph from an exhibition in the city, which blames the death of a Turkish teenager on Turkey’s President, Recep Tayyip Erdoğan.

On 25 April, the municipal government received a complaint from the Turkish consulate demanding that an offending photograph of the dead teenager, which is part of an ongoing photo exhibition of demonstrations shown on the Place des Nations square, in front of the European headquarters of the United Nations, be taken down.

The photo, by Swiss-Turkish photographer Demir Sönmez, who is of Kurdish and Armenian origin, shows a banner from March 2014, which proclaims that Erdoğan is responsible for the death of a teenager at Taksim Square, in Istanbul in June 2013. The caption on the photo reads: “My name is Berkin Elvan. The police killed me on the orders of the Turkish prime minister.”

The authorities, quoted by Swissinfo, said yesterday (26 April) that “the exhibition… highlights Geneva’s role as capital of human rights”.

The position of the municipal government contrasts sharply with the decision of German Chancellor Angela Merkel, who accepted a request from Turkey, to prosecute a German comedian for reciting a sexually crude poem about Erdoğan on German television.

On a visit to the Turkish city of Gaziantep on Saturday (24 April), Council President Donald Tusk said that Erdoğan needs ‘thicker skin’ against criticism.

The former Polish prime minister was visiting a refugee camp at Gaziantep, near the Syrian border on Saturday (23 April) with German Chancellor Angela Merkel, and was asked about Erdoğan’s legal moves against press criticism, including the German comedian.

Tusk said press freedom was a “permanent topic” in his talks with Turkish leaders which have produced the deal under which Turkey is taking back all refugees and migrants who reach Greek islands in return for concessions from the European Union.

Recalling his own jailing in the 1980s for opposing Poland’s Communist government, Tusk recalled that Erdoğan, too, had been imprisoned in 1999 for criticising Turkey’s government,

“Thirty years ago, I was imprisoned for being critical of the regime,” Tusk said late on Saturday. “My good friend, President Erdoğan, 15 years later also had a similar experience for expressing his views.”

Criticism of Turkey poses an obstacle to the deal struck by European Union leaders with Ankara last month, because approval of the EU’s side of the bargain, notably waiving visas for Turkish travellers by June, requires support in the European Parliament.

Tusk said: “As a politician, I have learned and accepted to have a thick skin and I have no expectation that the press will treat me with special care; quite the opposite.

“And the line between criticism, insult and defamation is very thin and relative,” he added. “The moment politicians begin to decide which is which can mean the end of the freedom of expression, in Europe, in Turkey, in Africa, in Russia, everywhere.”

Prosecutors have opened more than 1,800 cases against Turks for insulting Erdoğan since he became president in 2014, Turkey’s justice minister said last month. Those targeted include
journalists, cartoonists and even children.

“This struggle will not end until we shut the last mouth up that expresses hatred to our country and people’s history, values and culture,” Erdoğan said in a speech in the southern city of Adana on Sunday.

“We won’t turn the other cheek to those who slap us.”

While focused on the problems in Turkey, Tusk has also criticised Russian President Vladimir Putin, as well as his right-wing successors in Poland, whose moves to curb the independence of the public broadcaster have prompted inquiries from the European Union and European civil rights bodies.

After a Dutch journalist was arrested in Turkey this weekend for allegedly insulting Erdoğan, the most-read newspaper in the Netherlands on Monday published a front-page editorial cartoon that depicting Erdoğan as an ape, apparently crushing Europe’s free speech.

The cartoon, published by the populist daily De Telegraaf, has an ape with Erdoğan’s face squashing a woman who appears to be Ebru Umar, a Dutch journalist of Turkish descent, who was arrested in Turkey on Sunday (24 April). 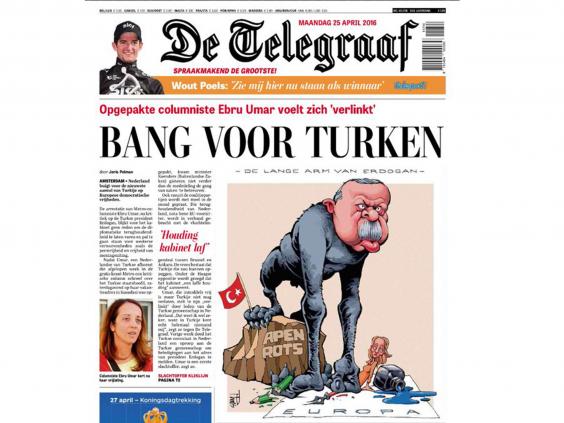 De Telegaaf cartoon of Erdogan as an ape

Umar, a columnist for the Metro, had been detained by Turkish authorities who are investigating tweets she had sent about Erdoğan. Umar was released Sunday, but she says she has been ordered to remain in the country as the investigation proceeds.