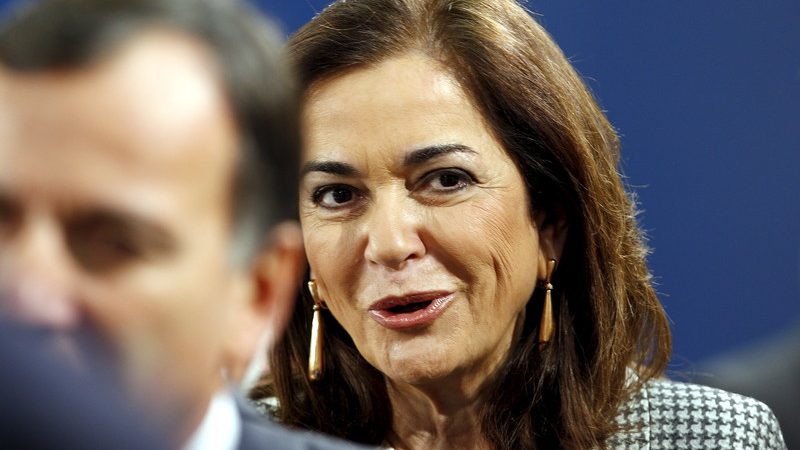 “It annoyed me a lot and to put it very clearly: I have the feeling that to some extend, the Europeans have lost it,” told Skai TV Dora Bakoyanni, a lawmaker of the ruling New Democracy party and former foreign minister. [EPA/FRANCOIS LENOIR]

Athens was surprised by the European Commission’s lukewarm initial reaction to the statement of Turkish President Recep Tayyip Erdoğan, who said that for him, Greek Prime Minister Kyriakos Mitsotakis “no longer exists”.

The comment comes at a time long-standing tensions between the two countries have started to simmer once again.

“It annoyed me a lot, and to put it very clearly: I have the feeling that to some extent, the Europeans have lost it,” Dora Bakoyanni, a lawmaker of the ruling New Democracy party and former foreign minister, told Skai TV.

Eyeing Turkey’s pressure on the US to unlock a deal for the delivery of F-16 jet fighters, Mitsotakis told the US Congress in a speech that Washington should mind the consequences of such decisions.

The statement triggered the strong reaction of Ankara, which used its veto on the NATO accession of Sweden and Finland to put pressure on Washington over the F-16 jet fighters.

“We had agreed to not include third countries in our dispute with him. Despite this, last week, he had a visit to the US and talked at the Congress and warned them not to give F-16s to us,” Erdoğan said at a news conference following the weekly cabinet meeting.

“He no longer exists for me. I will never agree to meet with him. We will continue our way with honourable politicians.”

Following pressure from Athens, Spinant came up with a “corrected” statement, saying, “Mr. Mitsotakis is the head of a government of an EU member state, which is recognised by the whole world. As the European Council has pointed out on several occasions, the EU expects Turkey to make a constructive commitment to the EU and its Member States and to take steps towards de-escalation”.

Bakoyanni, an influential politician, said the Commission’s new statement was “equally irrelevant” and added that the EU executive gets informed about the reality “with delay” and “lives in its own bubble”.

Following Mitsotakis’ visit to the US, the tension between Greece and Turkey escalated. Athens says violations of Greece’s airspace by Turkish air fighters have multiplied, while Ankara announced this week that it would launch new gas drilling activities in the Aegean Sea.

In the escalating row, Manfred Weber, the European People’s Party (EPP) chief in the EU house, stepped in, expressing his support for Mitsotakis.

“If President Erdogan is committed to NATO, he should stop provoking fellow allies. The question is does he really want to be part of our union of values?”, the Bavarian politician tweeted.