The pontiff was welcomed with yellow billboards and buses bearing pictures of his smiling face during his one-day stop in the mainly Orthodox Christian country.

Pope Francis urged the #Balkans to embrace its patchwork of faiths and ethnicities during a visit to North #Macedonia on Tuesday, where he held an open-air mass in the capital #Skopje, the proud birthplace of Mother Teresa. https://t.co/gYPPjKwAmY | @YahooNews

Catholics make up a small sliver — less than one percent — of the 2.1 million population, which also includes a large Muslim minority that is ethnic Albanian.

Addressing political leaders in the morning, Francis praised the “crucible of cultures and ethnic and religious identities” in “your land, a bridge between East and West”.

North Macedonia’s diversity, which reflects the mix of communities in the wider Western Balkan region, is a “mosaic in which every piece is essential for the uniqueness and beauty of the whole”, he added.

The pontiff said “unfailing respect for diversity” was key to the entire region’s “increased integration with the nations of Europe.”

All the Western Balkan countries are trying to join the European Union, which if it happens would soften the hard borders drawn between them during Yugoslavia’s bloody collapse the 1990s.

North Macedonia itself averted the inter-ethnic wars that shattered much of the region along communal lines.

But the landlocked country was brought to the brink in 2001 during a brief Albanian insurgency.

On Tuesday people of all faiths filled Skopje’s main square for the mid-morning mass led by the pope, who had arrived after a visit to Bulgaria, another country where the Orthodox church dominates. 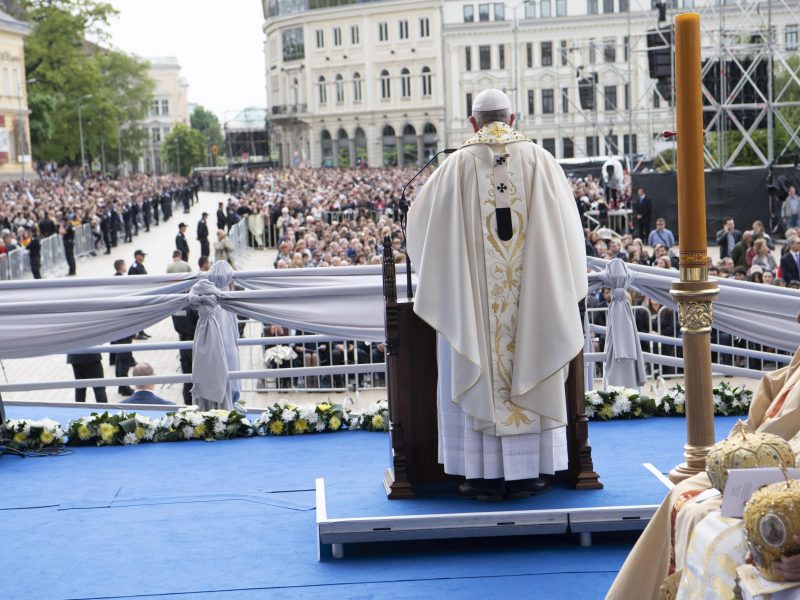 Pope Francis urged Bulgarians to open their hearts and doors to refugees as he began a visit to the European Union’s poorest country, where the main Orthodox Church snubbed holding joint prayers with the pontiff.

Believers from the region, including some from mainly Catholic Croatia, were also among the thousands-strong crowd, waving their country’s flags under sunny skies.

“For me this is a historic visit, not only for Catholics but also for us Orthodox, Muslims and all others living in North Macedonia,” said 18-year-old Filip Etmisovski, who arrived early for a spot in the square.

Bishop Kiro Stojanov of Skopje thanked the Pope for coming to meet “the small Catholic community that lives in the diaspora.”

In his homily, the Pope urged his audience to follow in the footsteps of Mother Teresa, who loved “the despised, the unloved, the lonely and the forgotten.”

Pope Francis prays in front of a statue of Mother Teresa at her Memorial during his visit to North Macedonia, the place of her birth. (CNS photo/ Paul Haring)

The celebrated nun was born to an Albanian family in Skopje in 1910, when it was part of the Ottoman empire.

Though she spent most of her life devoted to the poorest of the poor in Calcutta, her legacy is visible in her birthplace in the form of statues, memorials and a highway in her name.

“You are rightly proud of this great woman,” Francis told political leaders.

He also delivered a prayer and blessed the poor at a memorial dedicated to the nun whom Francis canonised as a saint in 2016.

“She became the prayerful cry of the poor and of all those who hunger and thirst for justice,” he told a gathering of leaders from the Catholic, Orthodox, Muslim, Jewish and Methodist faiths.

Prime Minister Zoran Zaev, who is leading his country’s push to join the EU, welcomed the pope’s call for unity during a time of bitter political divisions.

“For me the message from the Pope is that we should continue build bridges for understanding and reconciliation,” he said.

The move helped clear Skopje’s path to join NATO and the EU.

But it upset critics who felt they had been robbed of a piece of their national identity.

Pope Francis left Skopje, Tuesday, May 7, after a 10-hour visit, during which he implicitly blessed efforts by North Macedonia and other Balkan countries to join the European Union. pic.twitter.com/Nm1zm3n5hK