According to the EU , Serbia could join the Union in 2025. [Shutterstock/Dmitriano Hanov]

Earlier this week, Serbia opened two more chapters in its EU accession talks. It also received another clear message that progress on the rule of law and the normalisation of relations with Kosovo were crucial for the pace of its advance towards membership. EURACTIV.rs reports.

After unlocking the chapters on fisheries and financial and budgetary provisions on 25 June, Serbia now has 14 negotiating chapters open and two provisionally closed. But questions about the pace of its progress have been raised in Belgrade.

Serbia had sent five negotiating positions to Brussels, meaning it was ready to open five chapters, so the general public wondered about the pace of the negotiations, keeping in mind 2025 as the year mentioned in the EU’s new strategy for the Western Balkans as a possible accession year.

If the opening of chapters continued at this rate, Serbia would need five more years just to open them all, not to mention close them, which requires approval of all member states. In that case, regardless of the EU’s will, joining the Union in 2025 would be highly unlikely.

“I believe that there could have been more, but two is also good. Serbia’s mantra is that we are focused on the reforms we need to implement, the number of chapters opened is a matter handled by the EU,” said Serbian Prime Minister, Ana Brnabić.

The European integration minister, Jadranka Joksimović, said at the Intergovernmental Conference in Brussels that by opening new chapters Serbia was preparing to take part in the EU budget and receive money from EU funds when it becomes a member.

European Movement in Serbia (EMinS) Secretary General Suzana Grubješić told EURACTIV.rs that opening two chapters at a time could not satisfy Belgrade, but that it was important that the process was unfolding.

At this pace, Serbia will manage to open all chapters by the end of 2023 at the earliest, she said.

“Of course, we are negotiating under new, stricter rules, which may accelerate or slow down the process. In our case, that means that chapters 35  (the normalisation of relations with Pristina) and 23 (judiciary and fundamental rights) have a suspensive effect, i.e. if it is assessed that there is no progress in either of the chapters, the opening of some chapters is not allowed,” said Grubješić.

She added it was hardly surprising that only two chapters have been opened as the EU is is now grappling with several major issues, like migration and reform of the eurozone.

Meanwhile, EU foreign ministers reminded Serbia about the crucial importance of strengthening the rule of law and normalising relations with Kosovo, Serbia’s breakaway province which declared independence 10 years ago and whose independence Belgrade does not recognise, along with five EU member states.

European ministers stated that for Belgrade and Pristina, the normalisation of relations, including a legally binding agreement, is vital to their progress on the European road and essentially important for lasting regional stability.

The EU-mediated talks between Belgrade and Pristina resumed on 24 June after a three-month hiatus. Although an agreement is not in sight, EU High Representative Federica Mogherini said it had been “a difficult but encouraging” round of talks between the presidents of Serbia and Kosovo, Aleksandar Vučić and Hashim Thaci. 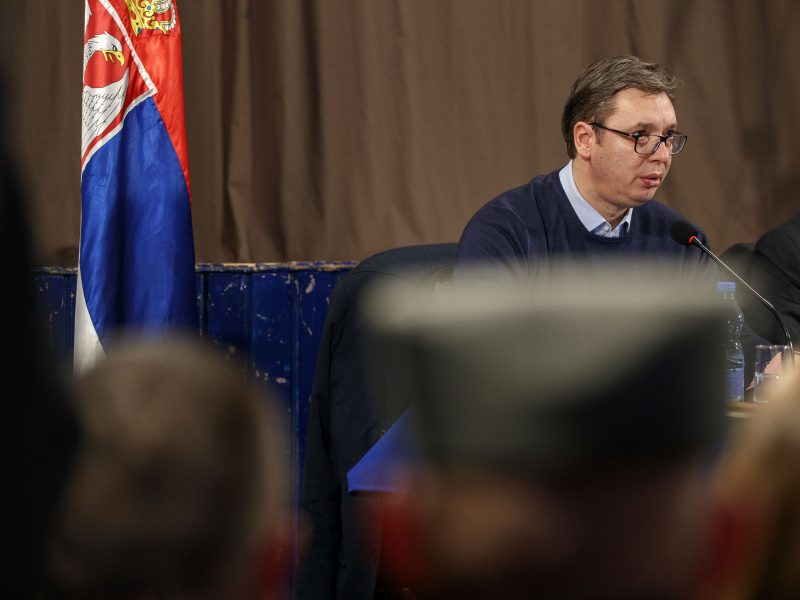 Serbian citizens not ready for personal sacrifice over Kosovo

Many Serbians see Kosovo’s independence as a realistic option, according to a new survey. A majority are also not ready to make any personal sacrifices to regain control over the former Serbian province, whose independence Belgrade refuses to recognise, and are much more preoccupied with economic issues instead.

The Serbian president said on Wednesday he would present to the Serbian people his proposal for a lasting solution to the Kosovo issue.

“There is nothing nice regarding Kosovo that we can win and offer to the people. Only problems and difficult things…  I will face the people and present my proposal. I won’t hide at all, and the people will decide on their own future,” Vučić told reporters in Kraljevo, central Serbia, where a joint police and military exercise took place.

He said the idea was to reach a compromise solution that was not detrimental to the citizens and then decide whether to put it to vote in a referendum.

According to media reports, Vučić and Thaci will meet again in mid-July. At the same time, there is also speculation about shuttle diplomacy aimed at resolving the Kosovo issue, which would be led by Angelina Eichhorst of the European External Action Service (EEAS).