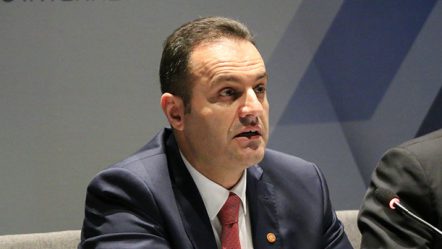 Albania’s former chief prosecutor, who fled the country after being handed a prison term for corruption, has been arrested in Italy, police in Tirana said on Monday (13 December).

Adriatik Llalla was arrested upon an international warrant and will wait for an extradition hearing a police statement said.

Wanted former General Prosecutor Adriatik Llalla – who had fled a two-year prison sentence in Albania – was arrested on 10 December in Italy, it has been confirmed.https://t.co/AhApF7XSZe

Llalla, once one of Albania’s most powerful men, was sentenced to two years in prison by a local tribunal in May but skipped the country shortly before his verdict became final last month.

The verdict showed that he had given false information on illegal assets.

These included an apartment in the seaside city of Durres and more than two hectares of land, whose total value exceeded one million euros.

The court ruled that Llalla, 52, “could not explain” where he got the money to buy the real estate and finance his travels to the US and Germany.

He was also banned from holding public office for the next five years.

In 2018, Llalla and his family were barred from entering the United States due to his “involvement in significant corruption”, the State Department said at the time.

Llalla is the most senior public official sentenced by the Special Court for Corruption and Organised Crime, an institution established in 2019 as part of Albania’s rocky efforts to clean up its graft-plagued judiciary.

Through a EU-backed justice reform, all members of the Albanian judiciary will undergo a vetting process. Some 800 judges and prosecutors are required to declare their assets and be evaluated on professionalism and reputation in an effort to root out corruption.

To date, some five years after the vetting started, only half of the 800 eligible have been vetted, and half of these have either been dismissed or quit. The reform also saw most of the High Court and Constitutional Court seats being vacated, bringing both to a standstill for almost two years. While both now have a quorum, the backlog of cases runs into the tens of thousands.

Llalla claims the charges against him are politically motivated and there are reports in some media he has sought political asylum in Italy.

The fight against corruption is a key condition for Albania’s EU bid.