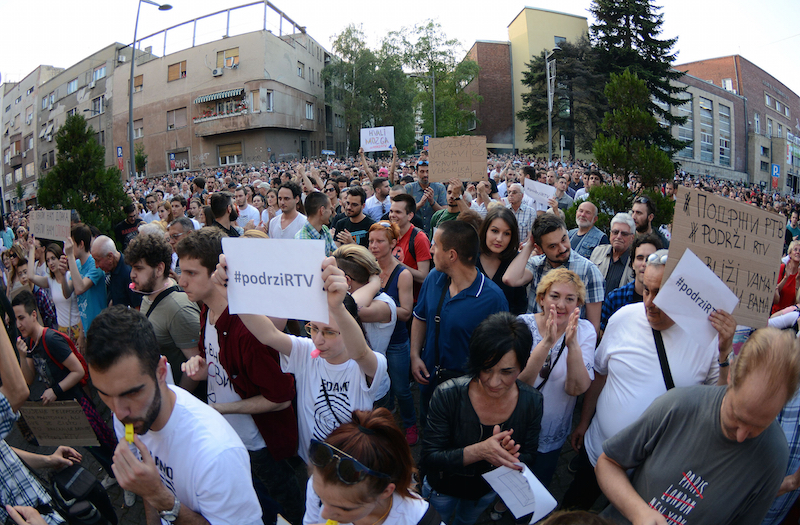 A protest rally was held in Novi Sad on 23 May over dismissals at the public Radio Television of Vojvodina, less than two weeks after the ruling Serbian Progressive Party, led by Prime Minister Aleksandar Vučić, came to power in the province. EURACTIV Serbia reports.

Journalism associations believe these dismissals to be political, while Vučić claims that no politics were involved.

Vojvodina is one of Serbia’s autonomous provinces, located in the northern part of the country, with approximately 2 million inhabitants. Novi Sad is the largest city and administrative centre of Vojvodina and the second-largest city in the country after Belgrade.

The EU delegation and OSCE Mission to Serbia stated on 22 May that they were carefully monitoring the large number of staff changes at the Radio Television of Vojvodina. The delegation and the OSCE emphasised the importance of fostering freedom of speech in Serbia.

OSCE media freedom representative Dunja Mijatović expressed concern about the dismissals, and the fact that new editors were hired without a proper recruitment process.

“This definitely sends a wrong signal about the independence of public broadcaster in Vojvodina,” Mijatović stated.

In its membership talks with the EU, Serbia is hoping to open accession chapter 23 soon, which focuses on judiciary and fundamental rights, and includes freedom of expression.

Changes after the elections

Local elections were held in Vojdovina on 24 April, coinciding with national elections.  Vučić’s Serbian Progressive Party scored a landslide victory in the region, opening the way for the party to form a provincial government, which it had long sought.

Already on 4 May, just 11 days after the elections, the board of Radio Television of Vojvodina unanimously decided to dismiss programme director Slobodan Arežina. 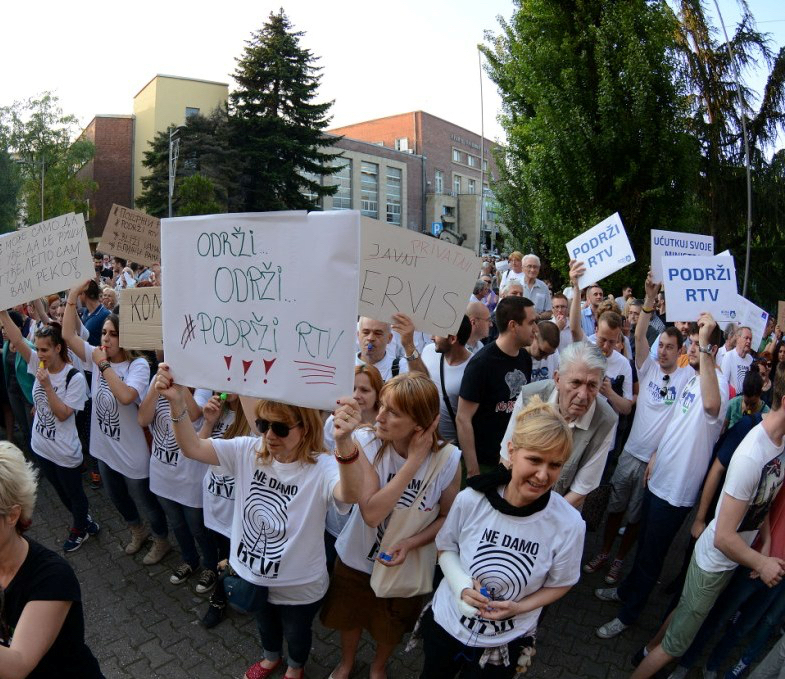 The decision, as board members explained, was made because of an alleged decline in ratings, and the lack of a Program Production and Broadcasting Plan for 2016.

Arežina, however, said that it was political pressure on the broadcaster and on his editorial policy.

The resignations of director Srdjan Mihajlović and of Novi Sad TV director Marjana Jović soon followed. Fourteen other editors who had been in charge of the news program were also dismissed.

On 17 May, Vojdovina’s board decided to call a competition for the appointment of a new editor-in-chief of the broadcaster’s Channel 1.

Vučić: Everything is according to regulations

The prime minister, however, believes that the layoffs of the Radio Television of Vojvodina editors were in accordance with regulations.

Vučić added that he did not think anyone should have a “hereditary position” or that “monarchism” should be introduced in public enterprises, so that those appointed by Democratic Party leader Bojan Pajtić and senior party official Bojan Kostreš “could occupy a post for the rest of their lives”.

Public media, and the editors and journalists at Radio Television of Vojvodina, protested and called for reconsideration of the decisions made.

The Radio Television of Vojvodina Programme Council said that the redistribution of duties or replacement of editors was a regular part of managing a media company, in line with its programme concept, but that it first had to go through “all instances of approval”.

Several thousand protesters gathered at the rally held on 23 May in Novi Sad demanding the resignation of the broadcaster’s managing board, and the annulment of all decision taken by that body.

Radio Television of Vojvodina Channel 1 acting director Nada Kalkan said that she believes that the events in the Vojvodina public broadcaster reflected “the new editor’s need to pick their team”, Cenzolovka reported on 19 May.

She later said that there would be no changes in the programming until the autumn, but that she couldn’t say what would happen after that.

Viewers have already gotten a glimpse at the changes to the editorial concept. One of the first moves is that Belgrade journalist Ljubica Gojgić, the host  of the Right Angle show, who joined the Radio Television of Vojvodina staff after the changes at Belgrade’s B92 TV, will not introduce Angle anymore, at 5PM.

The changes at Radio Television of Vojvodina resemble those at certain private and public national television stations over the last few years, when some political shows were cancelled and journalists like Gojgić moved to other jobs within their media companies and later left them.

Such was the case of cult political talk show Impression of the Week on B92 TV, hosted by Olja Bećković. The show was cancelled in 2014 after 20 years of broadcasting, including under Slobodan Milošević’s regime. Olja Bećković said at the time that her show had been “banned” and that Prime Minister Vučić was responsible.