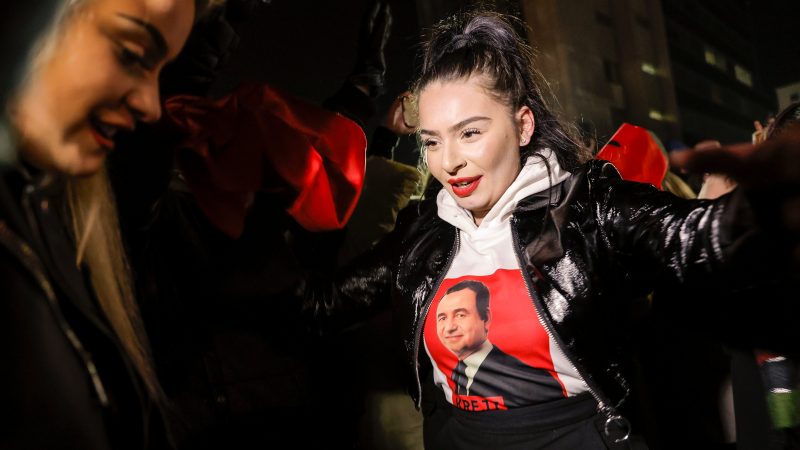 Kosovo’s left-wing reformists were headed for a landslide victory in parliamentary elections, initial results showed Monday (14 February), handing them a strong mandate for change from voters fed up with the political establishment.

The opposition Vetevendosje (Self-determination) party took home around 48% of the vote, according to a tally of more than 90% of ballots cast in the Sunday vote.

The triumph nearly doubled the party’s last electoral showing in 2019, reflecting a hunger for new leadership in troubled Kosovo.

“This great victory is an opportunity to start the changes we want,” the party’s firebrand leader Albin Kurti, long a thorn in the establishment’s side, said in a victory speech.

“The election was indeed a referendum on justice and employment and against corruption and state capture,” the 45-year-old added, while warning of “many obstacles” ahead.

The snap poll came after a tumultuous year in which the coronavirus pandemic deepened social and economic crises in the former Serbian province, which declared independence 13 years ago after a separatist war led by ethnic Albanian rebels.

Already one of Europe’s poorest economies, Kosovo is now struggling through a pandemic-triggered downturn, with vaccinations yet to start.

But for Vetevendosje’s supporters, Sunday’s results sparked hope of better days, with fans honking horns, setting off fireworks and gathering in the main square in the capital Pristina to cheer their victory.

The next two largest parties trailed far behind, with around 13 and 17% respectively for the ruling centrist Democratic League of Kosovo (LDK) and the Democratic Party of Kosovo (PDK) — a party of former rebels who have long dominated politics in the country.

Both camps admitted defeat, with the LDK’s outgoing Prime Minister Avdullah Hoti pledging to be a “constructive opposition” in parliament.

Once known for provocative stunts such as unleashing tear gas in parliament, Vetevendosje began as a street movement in the 2000s protesting against local elites and international influence in Kosovo, which was a UN-protectorate after the war.

It entered electoral politics in 2011 and has tamped down its more radical antics in recent years.

The party ran on an anti-corruption platform, accusing past leaders of squandering Kosovo’s first years of independence through graft and mismanagement while ordinary people suffered.

For most of the past decade, Kosovo has been run by the former commanders who led the late 1990s rebellion against Serb forces.

If they were once feted as independence heroes, the political elite have now become the face of the social and economic ills plaguing the population of 1.8 million, where average salaries are around €500 a month and youth unemployment tops 50%.

“The people are waiting for change, they are waiting for the removal of that which has hindered us, such as corruption and nepotism,” Sadik Kelemendi, a doctor, told AFP before casting his ballot in snow-covered Pristina.

The former rebels were also weakened this year by the absence of top leaders, including ex-president Hashim Thaci, who were detained in November by a court in The Hague on war crimes charges dating back to the 1998-99 rebellion against Serbia.

Vetevendosje now has a clear path to a ruling majority if they team up with minority parties, who are reserved 20 seats in the 120-member assembly, half for the Serb community.

The party also finished first in the last 2019 election, but with little over a quarter of the vote they only lasted some 50 days in power before their shaky coalition with the LDK crumbled.

The stronger showing this time has been attributed in part to Kurti’s new alliance with acting President Vjosa Osmani, 38, who recently left the LDK to join Kurti, turning the two into charismatic duo on the campaign trail.

“I think it is about time that Kosovo is led by not only a new generation of politicians in terms of age, but especially in terms of mindset,” Osmani told AFP ahead of the vote.

While Kurti himself did not run as an MP — he is banned due to a 2018 court conviction for unleashing tear gas in parliament — his party can still appoint him as their prime minister.

Known for a hardline stance on relations with Serbia, he would face heavy pressure from the West to reboot talks with the northern neighbour, which still denies Kosovo’s statehood.

Their lingering dispute is a source of major tension in the region more than 20 years after the war, and an obstacle for either side in its dreams of joining the European Union.