Israeli US and Kosovan flags during the establishment ceremony of diplomatic relations between Israel and Kosovo , in the ministry of foreign affairs in Jerusalem, Israel, 1 February 2021. [Abir Sultan/EPA/EFE]

Kosovo said Sunday (14 March) it had officially opened its embassy in Jerusalem after becoming the first Muslim-majority territory to recognise the city as Israel’s capital.

The move was in exchange for Israel recognising Kosovo, a major victory for Pristina’s efforts to gain full global recognition of the independence it declared in 2008 following a war with Serbia in the 1990s.

The European Union last month voiced regret at Kosovo’s decision to open an embassy in Jerusalem, saying it “diverges” the tiny Balkan country from the EU position. 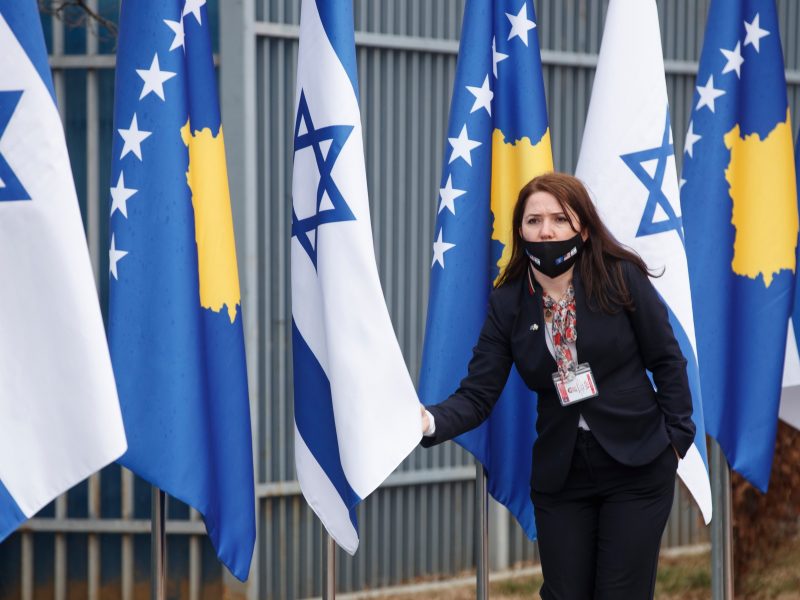 The European Union voiced regret on Tuesday (2 February) at Kosovo’s decision to open an embassy in Jerusalem, made as part of a broader deal brokered by the previous US administration, saying it “diverges” the tiny Balkan country from the EU position.

The new embassy was opened during a brief ceremony during which Kosovo’s flag was raised in front of the building in Jerusalem, the Kosovo foreign ministry said in a statement.

Serbia has refused to acknowledge the independence of its former province, so while Kosovo has now been recognised by much of the Western world, its rejection by Belgrade’s key allies Russia and China has locked it out of the United Nations.

Israel had been another key holdout until last month, when it established diplomatic ties with Kosovo.

In exchange, Kosovo followed the lead of former US president Donald Trump by recognising Jerusalem as the Jewish state’s capital.

Trump had discussed the Israel-Kosovo deal in Washington during economic talks with Serbia and Kosovo in September.

Kosovo’s decision sparked criticism from around the world, and particularly from Muslim-majority countries such as Turkey, which renewed its criticism on Sunday.

“We call on Kosovo’s leaders to listen to the voice of common sense and to renounce this irresponsible and illegal initiative,” the Turkish Foreign Ministry said in a statement.

The status of Jerusalem remains one of the biggest flashpoints in the long-running Israeli-Palestinian conflict.

The Palestinians claim east Jerusalem as the capital of their future state, and most countries have their embassies in Tel Aviv.

In one of Europe’s most intractable disputes, Serbia has rejected Kosovo’s independence since it broke away in a 1998-99 war that was ended only by a NATO bombing campaign against Serb troops.

Both Kosovo and Serbia face mounting pressure from the West to resolve the impasse, seen as crucial to either side joining the European Union.

More than 13,000 people died in the war, mostly Kosovo Albanians, who form a majority in the former province.