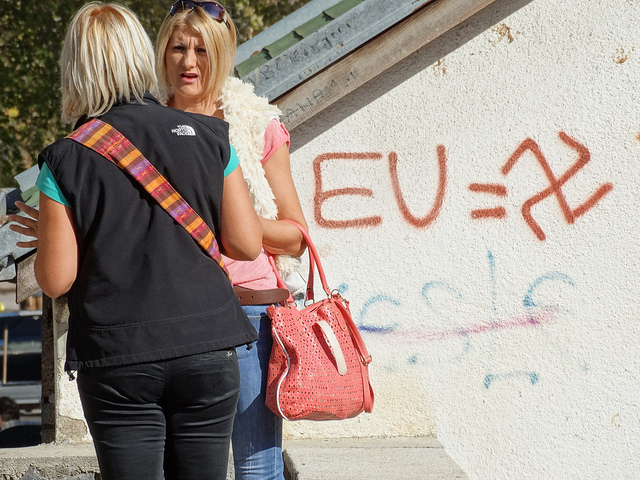 Kosovo Serbs, who have followed Belgrade’s lead and have refused to acknowledge Kosovo’s 2008 independence from Serbia, are still considered Serbian citizens.

And while Serbia has been on the EU’s visa-free travel list since 2009, it does not apply to Kosovo Serbs who hold special Serbian passports and must obtain a visa to travel within the EU.

The European Commission on Wednesday (4 May) proposed that Kosovo citizens, who are mostly ethnic Albanians, be allowed to travel to the EU’s Schengen passport-free zone without a visa. It must still be approved by the European Parliament and Council.

The minority ethic Serbs now fear they will be forced to recognise Kosovo as an independent state if they want a document or passport to travel within the EU without a visa.

“Obviously they want to force us to take dual citizenship and Kosovo passports,” said Tatjana Lazarevic, an English teacher in Serb-dominated Mitrovica in northern Kosovo.

She said Kosovo Serbs have already felt like “second-class citizens” with a special passport different from the one given to fellow Serbs in Serbia. “With visa liberalisation for ethnic Albanians (in Kosovo)… we would feel like the last of the Mohicans,” she added.

In Belgrade, the Serbian government’s office in charge of Kosovo affairs said it would “demand from the European Union that the visa liberalisation includes Serbs who live in Kosovo, regardless of their documents.”

“The visa liberalisation should not apply to a type of document, but to all citizens of the territory that it was granted to,” the office said in a statement.

But in Pristina, officials said only Kosovo passport holders would enjoy visa-free travel.

Scenes of violence at Kosovo’s parliament, in which opposition MPs released tear gas to prevent the election of a new president, were “extremely worrying”, the European Union said on 27 February.

“Every citizen of Kosovo should have a biometric passport to enjoy the right of (freedom of) movement” in the EU, Justice Minister Hajredin Kuci said.

EU Commissioner for Migration, Home Affairs and Citizenship Dimitris Avramopoulos, on a one-day visit to Pristina to present the proposal to local officials, agreed.

“Let me be clear on that. Only Kosovo’s passports are recognised. So, it is very, very clear,” Avramopoulos told reporters.

It is now recognised by more than 100 countries, including all but five EU member states, but it is not a member of the United Nations.

Belgrade has refused to recognise an independent Kosovo and is opposed to its membership of international organisations.