Sergei Lavrov, the foreign minister of Russia, speaks during the Munich Security Conference in Germany on 17 February 2018. [EPA-EFE/RONALD WITTEK]

Instead of now trying to implement that same strategy in the Western Balkans, the EU should pursue the concept of a united Europe “from the Atlantic to the Pacific,” the Russian foreign minister told the Serbian news agency in an exclusive interview ahead of his visit to Belgrade on 21-22 February.

Following are the excerpts from the interview, translated from Serbian:

The Ukraine crisis is not the cause of the current Russia-West relations, it is more a consequence of the policies the West, primarily US and NATO, pursued after the end of the Cold War. Instead of seizing a unique historic opportunity and form a true pan-European security and cooperation structure, the West chose to expand NATO despite all the promises made by US and European leaders that NATO would not move towards our borders.

It was not a written agreement, which it probably should have been. It was a gentlemen’s agreement that our western colleagues essentially disregarded[…]

So that what happened in Ukraine came as no surprise to us. It was a consequence of NATO’s chosen strategy. It had three enlargement waves after the Cold War and with every enlargement, NATO’ s military structure came closer and closer to Russia’s borders.

Now they want to involve the Balkans in this game, giving the Balkan countries the choice: You’re either with the West or with Russia. They gave the same choice to Ukraine, which caused a friction in the Ukrainian society, the state, and this brought about the unconstitutional coup, increased the role of the radicals, including the neo-Nazis in our neighbouring state. That is cause for serious concern but we are committed to the Minsk agreement and hope that those agreements, which were legally binding and supported by a UN resolution rather than gentlemen’s agreements, will be implemented.

The EU has recently published its enlargement strategy which promises Serbia and Montenegro membership in 2025 if a number of conditions are met. The main conditions for Serbia are normalising relations with Kosovo and aligning its foreign policy with that of the EU. Which means introducing sanctions for Russia. Are you concerned that the Serbian leadership may take that step?

We see no risk in the fact that the Balkan countries, and others in Europe, want to build relations with the EU. They are presented with conditions for membership and it’s up to them to assess how much those conditions suit them and their national interests… We see no problems from the point of view of expanding the common economic area. But we think it is not right to confront relations of the Balkan region with the EU to the relations it is building with the Eurasian Economic Union.

Serbia and Russia have a free trade agreement and a few months ago talks started between Belgrade and the Eurasian economic committee. This seems to me like a pragmatic approach by Belgrade, which wants to make the best of the West and the East.

EEU is a big market with 180 million consumers, with good infrastructure potential. The fact that the EU demands every candidate to join the EU’s common foreign and security policy comes from the same philosophy and mentality. This increases tensions in Europe, this was the philosophy of NATO, demanding that the European countries, Ukraine make a choice – West or Russia.

That’s a very wrong practice. I regret that the EU followed the same logic in its enlargement, as is also evident in the Eastern Partnership programme, which the EU created a few years ago for six ex-Soviet countries. Despite all assurances to the contrary, the programme is implemented on the basis of the same ultimatum: you are either with Russia or with Europe.

It is bad that our colleagues in Brussels continue to think this way. We would very much prefer if they returned to the concept that was communicated in Brussels and other capitals on several occasions, starting with De Gaulle’s France, which put forward the concept of a united Europe from the Atlantic to the Ural.

We are already talking of a Europe from Lisbon to Vladivostok. As far as I know, after the coalition talks in Germany, the necessity of pushing forward the creation of a common economic area from the Atlantic to the Pacific has been included in the new coalition government’s programme. Here I would also like to mention the new, still modest contacts at a technical level between the European Commission and EEU, something Brussels has tried to avoid until recently.

Therefore, this seems like the most enduring and prosperous tendency: not to consider creating some closed alliances in the military, political, economic spheres, but to take a broader look at things and look beyond a period of four years, until the next elections in this or that European country, see the perspective. And the perspective is very positive if we’re all guided by the interest of working together.

When talking about Serbia’s EU accession, President Vučić never said this would be accomplished at the expense of Russia. On the contrary, he emphasised that the Russian foreign policy and cooperation will remain very important for Serbia.

But analysts in Serbia think President Vučić will not be able to sit on the fence for much longer and will have to make a choice.

The EU’s increased focus on the Balkans has recently been explained by the expansion in the region of countries like Russia, China, Turkey. Is their influence really growing? How does Russia see its presence in the region?

Our presence in the Balkans is primarily constructive. We feel no concern about the countries you’ve mentioned. In times of globalisation, I see no obstacles to cooperation. Most importantly, it’s a sincere wish to implement concrete projects to mutual benefit, rather than mark your presence in the region at the expense of someone else.

Russia has never brought confrontation to the Balkans. It has helped the Balkan countries defend their statehood, their religious, cultural, civilisational roots. Right now we are following the same logic by developing our cooperation. Together with Turkey, we want to increase the Balkan countries’ potential for receiving Russian gas. The Turkish Stream project is being actively implemented, we are doing it openly, taking into consideration the interests of the  Balkan countries and the EU. We are absolutely open, there is no hidden agenda. 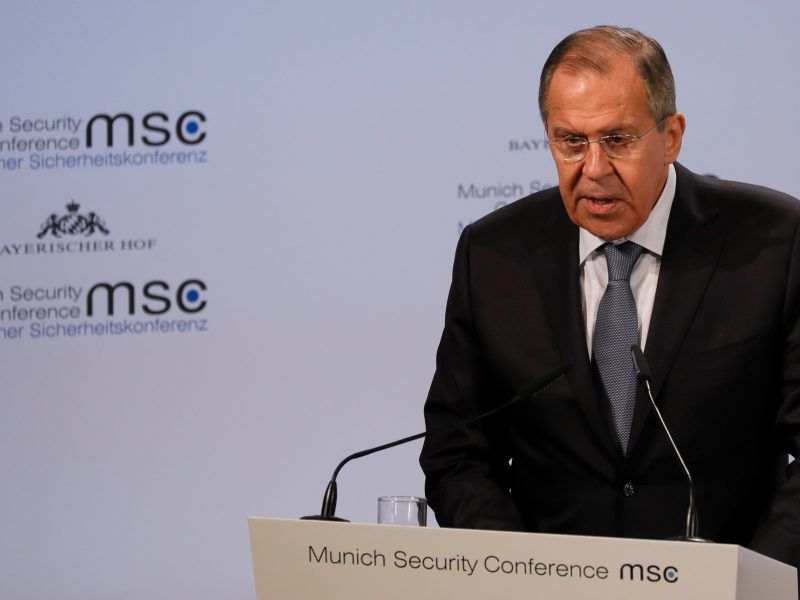 European and US officials divided over US President Donald Trump’s foreign policy found common cause this weekend in decrying what they say is Russia’s covert campaign to undermine Western democracies.

NATO’s enlargement is a mistake and a violation of the gentlemen’s agreement I already mentioned… We have warned our colleagues in NATO on more than one occasion that this policy, which has seen three enlargement waves and will now see another one, not only undermines everything we agreed in the 1990s, that no one will ensure their security at the expense of others, but it also represents, probably, the most serious challenge for the pan-European stability and security.

Because they are trying to keep the continent divided in two. They are trying to move those division lines further to the east, closer to our borders. In fact, they are already on Russia’s borders, serious contingents from NATO countries, US, UK, Germany, Italy, Canada. And all of that, I repeat, is contrary to our agreement and damages greatly the stability and security in Europe.

Nothing NATO is doing right now is increasing anyone’s security, including the security of the Balkan countries, which are in no way threatened by Russia. Nothing that’s happening right now is a step towards increasing NATO’s ability to react to real threats, not imaginary threats. I don’t see how the three enlargement waves have made NATO more able to fight terrorist threats or narco threats, including threats that come from the Balkans, where after Kosovo’s unilateral declaration of independence, a territory was created that personifies corruption and what we call ‘a black hole’.

We are not singling anyone out. We are talking about what we see and think. I think Montenegro’s admission [to NATO] was artificial and unnecessary. We did note that the will of the people, in the form of a referendum, is becoming less and less popular when it comes to making such historic decisions.

Will Russia be in favour of Kosovo’s seat in the UN?

2 responses to “Lavrov: EU, NATO wrong to force ‘West or Russia’ on the Balkans”