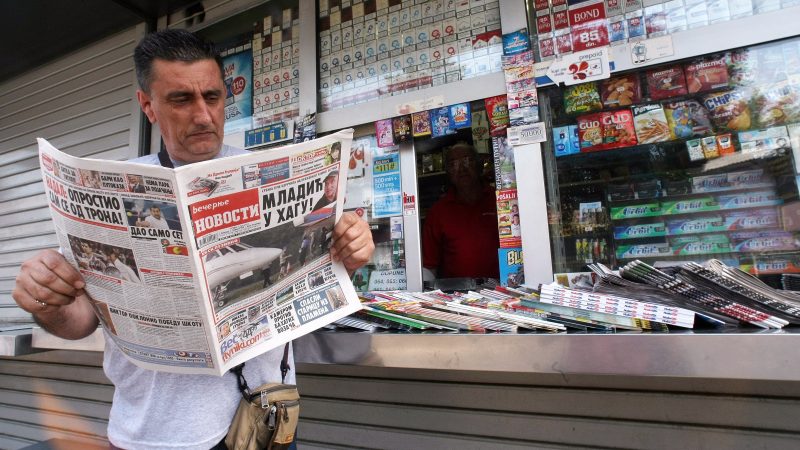 The print media in Serbia that most often violate the journalistic code of professional conduct continue to be the beneficiaries of public funding, warned an internal EU paper obtained by EURACTIV that painted a bleak picture of the EU candidate country’s democratic record.

The 23-page non-paper, bearing the logo of the EU Council, represents the sixth report under Serbia’s negotiating framework on the chapters “Judiciary and fundamental rights” and “Justice, freedom and security”. It is based on Serbia’s contribution, as well as other sources, including reports from international organisations and civil society.

The paper, dated 28 May, will probably be discussed by EU ambassadors on Friday (4 June).

Using diplomatic language, the paper depicts the state of play and states that Serbia needs to accelerate reforms in the key areas of the judiciary and notably judicial independence, the fight against corruption and organised crime, media freedom, and handling of war crimes.

According to the paper, the Office for Democratic Institutions and Human Rights of the Organization for Security and Cooperation in Europe (OSCE/ODIHR) found that most TV channels with national coverage and newspapers promoted government policy and the few media outlets that offered alternative views had limited outreach and provided no effective counterbalance.

The Regulatory Body for Electronic Media (REM) has assessed that a large portion of the air time was given to analysts who seemed to have been politically biased.

The non-paper says that print media with the most violations of the journalistic code of professional conduct recorded by Serbia’s Press Council continued to receive public co-funding.

Also, cases of threats and violence against journalists are said to remain a concern.

The non-paper also says that Serbia still needs to ensure the full implementation of media laws and strengthen the independence of the Regulatory Body for Electronic Media, ensure transparent and equitable co-funding for media content serving the public interest, and increase transparency in media ownership and advertising.

The completion of constitutional reforms aimed at ensuring the independence of the judiciary was planned for 2017, when Serbia was supposed to hold a referendum on the proposals.

However, the process remains delayed which, according to the non-paper, has repercussions on the drafting and adoption of the implementing legislation.

Pressure on the judiciary and the prosecution still remains high, the non-paper says.

“Government officials, including some at the highest level, as well as members of parliament, continue to comment publicly on a regular basis on ongoing investigations or court proceedings, or on individual prosecutors and judges. Information leaked on ongoing investigations or cases is used by tabloids. This results in members of the judiciary or the prosecution being discredited”, the text reads.

Regarding the legacy of the Yugoslav wars, the non-paper says that Serbian leaders continue to publicly challenge the judgments of the International Criminal Tribunal for the former Yugoslavia (ICTY).

“Regarding judicial cooperation issues, Cooperation with Croatia has not led to tangible results. Serbia has yet to enforce the judgment of Bosnia and Herzegovina in the case of General Djukić,” it states.

Novak Djukic, who was already convicted in Bosnia for the 1995 Tuzla massacre and sentenced to a 20-year jail term, resides in Serbia. He will not appear at the Belgrade Higher Court until September 2021 at the earliest, due to mental health problems, a medical examination has recently concluded.

The non-paper also says that since the expiry of the national anti-corruption strategy in 2018, Serbia does not have a strategic policy framework and coordination mechanism in place.

It also mentions the frequent refusal by public bodies to disclose information, following requests submitted under the law on access to information, which have continued to hinder the work of journalists.

In December 2020, the Financial Action Task Force (FATF) expressed concerns regarding the allegations that the government had misused its law on the prevention of money laundering and the financing of terrorism, with the aim to restrict or coerce civil society actors for their work and criticism of the government.

Slavko Ćuruvija was a Serbian journalist and newspaper publisher whose murder in Belgrade in April 1999 sparked international outrage and wide condemnation.

Investigations are ongoing into the murders of fellow journalists, Milan Pantić and Dada Vujasinović.