Lukashenko: ‘I talk to Putin about Serbia almost every time we speak’ 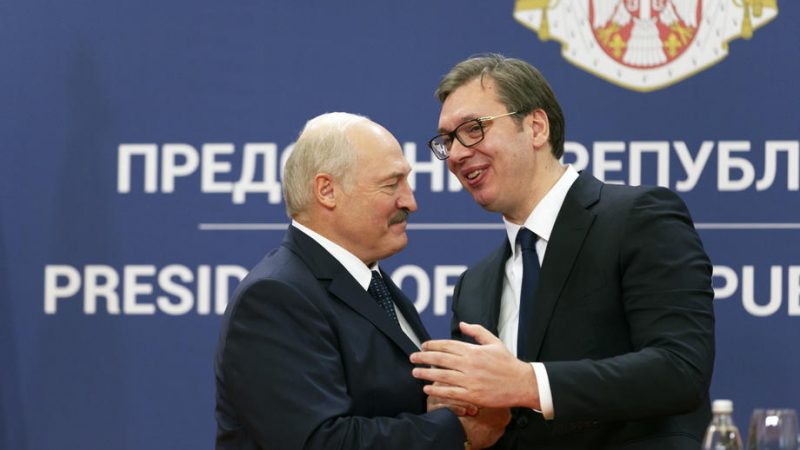 Belarus’s President Alexander Lukashenko says that he discusses the Balkans, and in particular Serbia, at most meetings with Russian President Vladimir Putin.

According to the Serbian agency Tanjug, Lukashenko made the comments on Tuesday (7 December) during a meeting in Minsk with the president of the friendship group with Belarus of the Serbian Parliament, Dragomir Karić.

“I have to tell you that I talk about the Balkans at almost every meeting with President Putin. And who do we have in the Balkans? That’s right, we have Serbia. It has always been a stronghold of Slavs in the Balkans. It still is”, Lukashenko is quoted as saying.

“We talk very often about the problems you are facing. We are committed to very good cooperation”, the President of Belarus added.

According to the Belarusian news agency BelTA, during the meeting with Karić, Lukashenko stated that Serbian President, Aleksander Vučić, was aware of the regular dialogue and pointed to the meeting between Vučić and Putin in Sochi in November.

On 2 December media reported that Russian Defence Minister Sergey Shoygu and Serbian Interior Minister Aleksandar Vulin had agreed to expand and strengthen military cooperation between the two countries at a meeting in Moscow.

“We always have issues to discuss with our Serbian friends. Cooperation between Russia and Serbia has become dynamic and multifaceted in recent years,” Shoygu was quoted as saying.

For his part, Vulin said an office of the Russian Defence Ministry will be opened in Belgrade in the near future under a bilateral agreement between the countries.

Vulin reportedly stated that the office would open very soon and that “only the technical issues remain”. Vulin also announced the acquisition of the new Russian anti-aircraft defence systems Pantsir.

“Our countries’ presidents have agreed on the further development of bilateral cooperation in various fields, including defence,” Shoygu said.

Many pro-European minded Serbians are surprised that despite the obvious Serbian drift away from the EU, Brussels has agreed to open another cluster of accession negotiations with Belgrade.

As if it knew. My dad’s 🇪🇺 flag accidentally fell on the floor this morning. I left it there for a little while.

A decision to open the K4 with Serbia and at this precise moment has put yet another nail in the coffin of EU enthusiasm in the country pic.twitter.com/TmlIQMj1ad

Cluster 4 on the Green agenda and sustainable connectivity, will be formally opened at an intergovernmental conference in Brussels, covering four negotiating chapters on transport policy, energy, Trans-European Networks and the environment and climate change.