The opponents of the referendum celebrate the small response of the voters on the referendum on the country's name change in front of the Parliament building in Skopje, The Former Yugoslav Republic of Macedonia, 30 September 2018. [Valdrin Xhemaj/EPA/EFE]

Prime Minister Zoran Zaev faces an uphill battle to get the necessary votes to rename the Balkan state North Macedonia to end the row with Athens and open a path to EU and NATO membership.

He needs two-thirds of parliament’s MPs to amend the constitution and seal the deal.

But the Social Democrat premier’s coalition, backed by parties representing ethnic Albanians — who make up around a quarter of the country’s 2.1 million population — doesn’t have enough votes.

He will need to get the support of around a dozen deputies from the rightwing opposition VMRO-DPMNE party, EPP affiliated, which has campaigned vehemently against the change. VMRO-DPMNE-supported President Gjorge Ivanov has taken strong positions against the deal to change the country’s name. 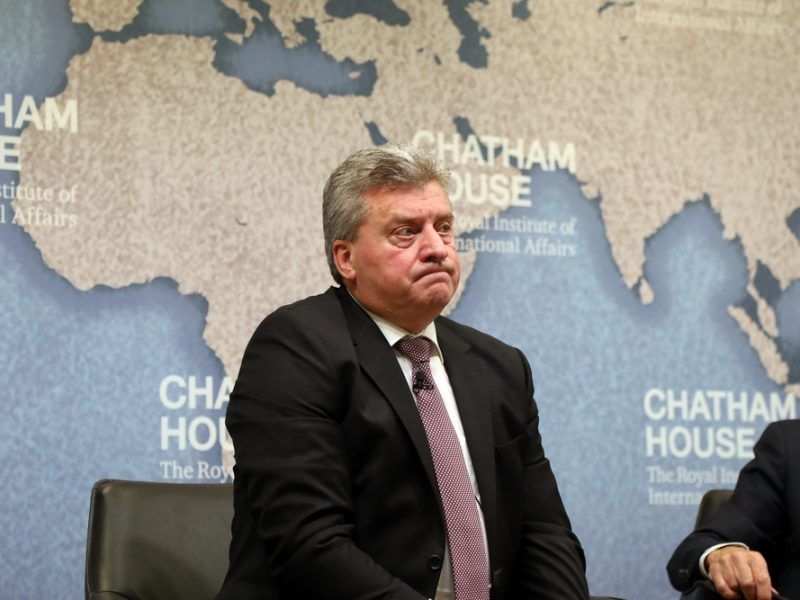 Ever since its small neighbour proclaimed independence in 1991, Greece has maintained that the word Macedonia can only apply to its own northern province.

Greece has long vetoed the Balkan country joining NATO and the European Union over the bitter row.

But a breakthrough came in June when Zaev and his Greek counterpart Alexis Tsipras agreed on the name North Macedonia.

Macedonia then held a referendum on 30 September in which more than 90% supported the name change — but only a third of the electorate turned out, leading to opponents claiming the result was illegitimate.

The poor turnout has hurt Zaev’s campaign to attract opposition MPs to the cause.

“There will be no two-thirds majority, do not hope for it,” VMRO-DPMNE MP Trajko Veljanovski said last week.

Another of the party’s MPs, Ilija Dimovski, was more cautious.

“We will see what will happen, but VMRO-DPMNE MPs, or most of them, will not support the deal.”

The government has planned talks with four or five VMRO-DPMNE lawmakers — which would still not be enough to ratify the deal.

“All this is very uncertain,” a government official, who requested to remain anonymous, told AFP.

Zaev has said that if parliament fails to pass the name he will immediately call early elections.

According to Florian Bieber, a professor of southeast European studies at the University of Graz in Austria, it is still “possible that pro-agreement parties and candidates might win a two-thirds majority and ratify the agreement.

“Only if this fails, will the agreement be dead or at least shelved,” he told AFP.

But Boris Georgievski, expert in international relations and head of Deutsche Welle’s Macedonian-language service, said that if Monday’s vote falls short he does “not see how the agreement has a chance to survive”.

And time is running out, as the agreement stipulates that everything must be completed by the end of the year — though Greece has already said it is willing to be flexible over deadlines.

Failing to change its name could push Macedonia into isolation.

Tsipras said in July that if the deal is not ratified, Skopje will not be invited to join NATO and EU talks will not move forward.

This “chance will not be repeated”, Zaev warned, and called on the opposition to look to “its responsibilities”.

“There is no plan B to join NATO without a name agreement,” the military alliance’s chief Jens Stoltenberg repeated earlier this month.

“The only way to become a member of NATO is for the country to agree on the name issue with Greece.”

Bieber said that while Macedonia had historically seen Athens as the “main stumbling block”, failing to pass this deal “would certainly put the country and the government in a difficult position, as the responsibility would lie with it, and not with Greece”.

The parliamentary session starts at 11:00 am (0900 GMT) on Monday. No deadline has been set for when it will end.