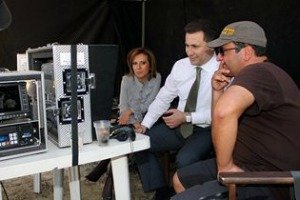 Bulgarian MEPs outraged over a Macedonian film that depicts wartime Bulgarians as fascists are calling on Enlargement Commissioner Štefan Füle to confront Skopje over the forthcoming movie.

MEPs Andrey Kovachev (EPP), Evgeni Kirilov (S&D) and Stanimir Ilchev (ALDE) have signed a letter, a copy of which was obtained by EURACTIV, in which they state their concern over the "attempt to manipulate Balkan history" and "spread hate" on the part of the EU candidate country against its neighbours.

The Macedonian film "Third Halftime" is being filmed in Macedonia as a lavishly funded international production, depicting a football match played in 1942 between two teams of the Bulgarian football league – Levksi and Makedonia.

According to information obtained by EURACTIV, the film depicts the Bulgarians as fascists, plotting to kill the coach of the "Macedonian" team, who is of Jewish descent.

"The film should make Macedonians come together," according to official statements quoted by the press in Macedonia. However, Lazar Mladenov, president of the Bulgarian Cultural Club in Skopje, told EURACTIV that mass scenes in the film stage a "very heavy anti-Bulgarian atmosphere".

The film is done with the support of the Macedonian Prime Minister Nikola Gruevski,  who helped grant the production a state contribution of €1 million.

The general sponsor of the film is Sparkasse Bank, a part of the German banking group that has been asked by Bulgarian MEPs to withdraw its support.

In the letter to Füle, MEPs said that the "FYROM policy is running counter to our European values" and shows Skopje is breaching European acquis, citing various texts from European Parliament resolutions.

Athens insists that Macedonia use FYROM in a long-running dispute with its Balkan neighbour over Greece's argument that "Republic of Macedonia" implies a claim over its northern region.

In addition, Greece considers that Skopje is misappropriating large chunks of its ancient history. Similarly, Bulgaria considers that Macedonia is cherry-picking heroes and glorious episodes from its medieval history and the 19th- and early-20th century struggle against Ottoman domination.

Recently, Skopje angered Athens by erecting a giant statue of a 'warrior on horseback' resembling Alexander the Great in the centre of Skopje. Both nations claim Alexander as a native son.

Kirilov told EURACTIV that the Gruevski government had "overdone it" with nationalist activities, aimed at boosting its popularity. "This may have helped him win the elections, but the Macedonian people will soon realise that this is not in the country's interest," Kirilov said.

Commissioner Füle's office told EURACTIV they had just received the letter, and had requested his representatives in Skopje to provide more information.

Macedonia has been an independent country only since 1991, when it seceded from former Yugoslavia.

During World War II, Macedonia was occupied by Bulgaria and Italy. Bulgarian authorities, under Nazi pressure, were responsible for the deportation of around 7,000 Jews from Skopje and Bitola.

No Jews were deported from Bulgaria during World War II. In 1943,  Bulgarian officials took the historic decision "to refuse the Nazi regime's order to deport Bulgaria's Jewry despite the presence of German troops in the country." The refusal saved all 48,000 Jews living in Bulgaria at the time from being deported to death camps. When Israel was established in 1948 about 45,000 of Bulgaria's Jews emigrated there and today about 5,000 remain in Bulgaria, most of whom live in the capital, Sofia.

The decision was taken at the time despite Bulgaria being an ally to Hitler's Germany.  No such popular pressure ever came about in Skopje and Bitola.