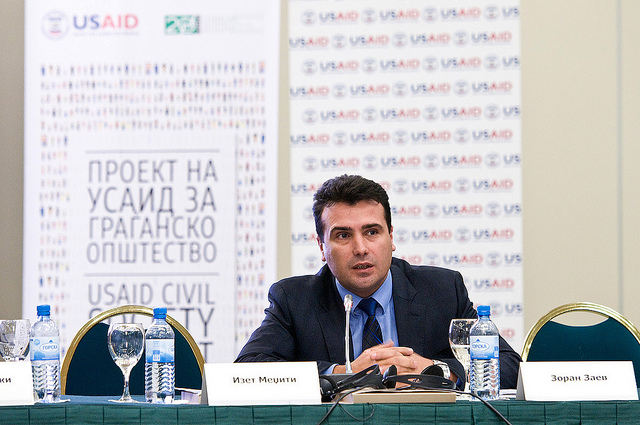 The leader of the Macedonian opposition confirmed to EURACTIV that his party will not recognise the last election results in the country and denounces ‘a dictatorship’, as the “new government” fails to get congratulations from the EU and USA.

A political crisis in Macedonia is looming as the Social-Democrat (SDSM) opposition refuses to recognise the legitimacy of the government after early parliamentary elections were held on 27 April, together with a second round of presidential elections.

In an interview with EURACTIV, the leader of the SDSM, Zoran Zaev, confirms his MPs will not accept their parliamentary mandates and the party will call for the formation of an interim government, made up of experts, similar to what the country experienced in 2001 during the armed conflict with Albanian guerillas.

Despite a peaceful election day, the OSCE/ODIHR monitoring report of the process indicates a number of serious shortcomings in the days and months leading to it, with remarks such as “the campaign of the governing party did not adequately separate party from state activities, at odds with paragraph 5.4 of the 1990 OSCE Copenhagen Document.”

The European Commission endorsed the report and issued a press release along the same lines: “Commissioner Füle [in charge of Enlargement] pointed to the repeated OSCE/ODIHR recommendations regarding biased media coverage and the lack of separation between state and party activities, which are covered by the Copenhagen political criteria.”

For the opposition leader, the results, which show stronger support for Prime Minister Nikola Gruevski than in the previous early elections in 2011, after eight years of governing the country, cannot be trusted.

“The fact that the support for Gruevski is growing only means that the government has systemic control over the elections,” Zaev told EURACTIV.

“The biggest problem in Macedonia is what the OSCE/ODIHR report noted – the blurring of state and party lines. This is why we demand an interim government which will separate the state from the ruling party, which will guarantee free and democratic elections. We know in details where the state and the party meet: it’s some specific ministries where we have direct pressures, buying of votes, intimidations, threats,” Zaev explained.

“Macedonia today is not a free society. There is no free expression of the will of the people. It’s a dictatorship in which the voter and the citizens are being controlled,” he added.

“No congratulations from the EU”

Unlike former boycott attempts from the Macedonian opposition, most notably on 24 December 2012  (known as Black Monday) when SDSM MPs refusing to vote for the budget were forcibly removed from the parliament, along with the journalists, this time, Zaev says, the EU and the US are less prompt in condemning the opposition’s decision.

“This time they don’t ask that [to return to parliament] from us. And they can’t because the OSCE/ODIHR report says it all. They have no arguments to demand that. They also know that until now, we gave chances to the government each time. Therefore, it is logical that nobody asks that from us, because the government always used that as an alibi. Last year, (when) opposition MPs were thrown out of the parliament violently, one can only wonder what else can happen to those MPs in the parliament next time,” the politician worries.

Moreover, he says, “until now not one foreign country has congratulated Macedonia [on the elections results], neither the European Union, nor the USA, quite the contrary. They say that the situation is ‘complicated’.”

Indeed, the Commissioner issued a statement after election day saying that “we are aware” of the opposition’s statement not to recognise the elections.

“This situation is unfortunate for the country. All political leaders must be fully aware of their responsibilities in this context,” it added.

A more telling answer was given by the Dutch ambassador in the country, Mariette Schoerman in an interview with Radio Free Europe:

For the Dutch envoy, “peaceful elections are not necessarily free elections.”

>> Read also the opinion of the former EU ambassador to Macedonia: “Democracy has lost its meaning in Macedonia”

No high-level meeting with the EU

In the meantime, the Enlargement Commissioner has “canceled his trip to Macedonia”, where he was supposed to meet with high-level officials in the framework of the High-Level Accession Dialogue (HLAD), a tool the Commission put in place to “keep the EU process alive” in the country, local media report.

Although it was not confirmed that Füle canceled the trip, EU sources told EURACTIV “it is there between the lines. In the current situation, it does not make much sense to add another round of HLAD, they first need to sort their current troubles.”

The EU Commissioner for enlargement was highly engaged in solving the several internal political crises, in the country since he took office five years ago, but events in Ukraine, EU elections, and the lack of progress in Macedonia seems to have brought a certain level of “wariness” in the EU Commission towards the candidate country.

However, the country’s media reported that EU diplomats “warned” the Macedonian high officials that the recommendation for EU negotiations granted in 2009 “could be scrapped if no progress is made.”

The Commissioner for Enlargement and European Neighbourhood Policy Štefan Füle said: "In relation to the recent parliamentary elections, Commissioner Füle pointed to the repeated OSCE/ODIHR recommendations regarding biased media coverage and the lack of separation between state and party activities, which are covered by the Copenhagen political criteria.He  pointed to the importance of constructive dialogue, engaging all parties, in the interest of the entire country."

Early parliamentary elections were held in Macedonia on 27 April, in parallel with a second round of presidential elections, bot won by the ruling VMRO-DPMNE.

?Following serious criticism about lack of freedom of media, buying off votes in the public administration, and blurred lines between party and states, the Social-Democrat opposition took the decision to not recognise the electoral process, nor the results.

Macedonia, a land-locked country in the Western Balkans, has been a candidate country for accession in the EU since 2005 and received a positive recommendation from the EU Commission to start accession negotiations in 2009. However, a outstanding dispute with Greece over Macedonia's name and another with neighbouring Bulgaria over "good-neighbourly relations" prevented the country from getting green light from the European Council and start the talks. In the meantime, democratic standards in the country have deteriorated, putting in question the relevance of the recommendation.