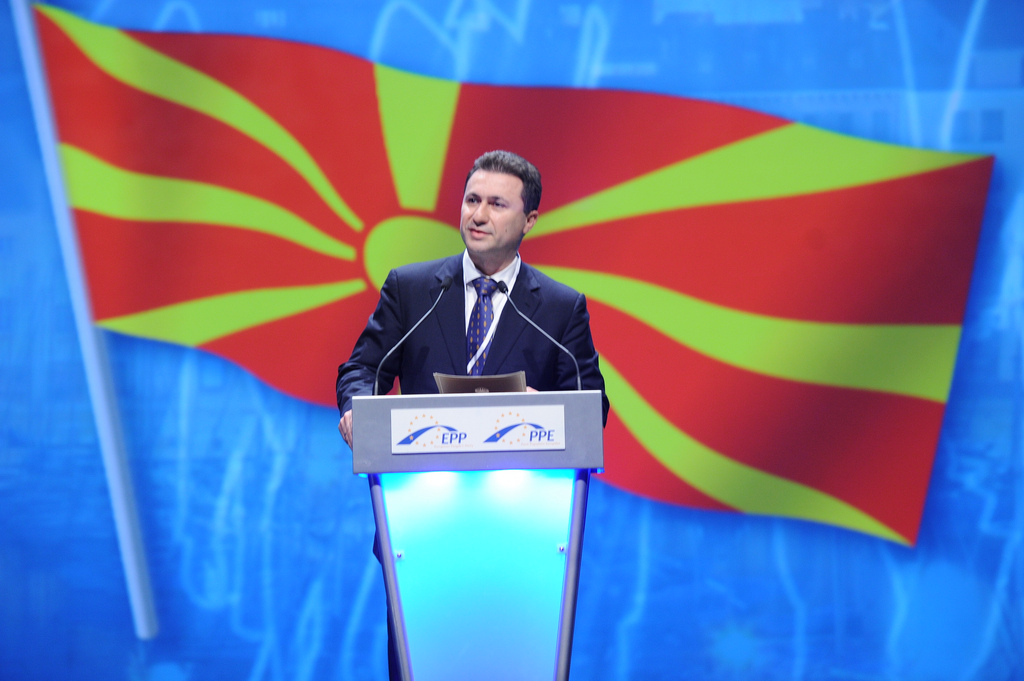 Nikola Gruevski, the former prime minister, is largely responsible for the start of the crisis in which the country finds itself. [EPP/Flickr]

Political uncertainty in the Former Yugoslav Republic of Macedonia (FYROM) is leading to growing doubts over the country’s capacity to meet its EU-accession targets. EURACTIV Germany reports.

EU membership candidate FYROM is sliding deeper into political crisis. Since the news broke in February of last year that the then prime minister Nikola Gruevski had spied on the opposition, a wave of nationwide protests have broken out and the Balkan nation has been mired in a state of quasi-misery.

The elections originally scheduled for 5 June were postponed indefinitely last Wednesday (18 May) by the parliament in Skopje.  The opposition party, the Social Democratic Union of Macedonia (SDSM), had already announced its intention to boycott the election until the government removes thousands of inactive or “zombie” voters from the electoral register.

EU enlargement Commissioner Johannes Hahn has supported the SDSM’s position and said that no fair election could be guaranteed under the present conditions.

In Germany, there are also growing concerns about the situation in Macedonia. Minister of State for Europe Michael Roth told dpa that Berlin is “extremely concerned” by the unfolding political crisis and has urged conditions to be established that will allow democratic and constitutional elections to be held. “We are currently seeing political leaders acting in a way that is not becoming of a country that wants to join the EU,” said Roth.

The situation first began to escalate at the beginning of last year, when allegations of corruption were made against Gruevski and other members of the ruling VMRO-DPMNE party. Things really kicked off when the tapped phone conversations of the opposition were leaked. It showed that the government had routinely eavesdropped on its political rivals and critical journalists, as well as manipulating votes and engaging in criminal activity.

The EU warned yesterday (17 May) that elections scheduled for next month in Macedonia could not be credible, because the ruling party was the only one to register candidates.

A wave of protest swept the country and the so-called “Colour Revolution” called for the resignation of the government. Since then, not a lot has happened.

The United Kingdom has increased its political pressure on Skopje to end the confrontation and to abide with an EU mediation agreement that was made last autumn. British Foreign Secretary Philip Hammond said on Monday (23 May) that “negotiations with the EU and NATO” would be put at risk otherwise.

The agreement, signed by the ruling party and the SDSM, stipulated that Gruevski would have to resign, which has indeed happened, a new parliament would be appointed and a special prosecutor for political corruption would be established.

But this latter point appears to be a thorn in the side of the VMRO-DPMNE: the three special prosecutors that have been appointed, and who have since taken on a sort of hero status, have targeted the party elite, in particular those affiliated with the Gruevskis. Macedonia’s President, Gjorge Ivanov, recently gave amnesty to 56 people from both the ruling and opposition parties and has sparked further protests.

The pardon was issued before the prosecutors’ accusation were even heard in a courtroom, suggesting that the evidence against the 56 is overwhelming. “This development shows how desperately the Gruevski regime wants to hold onto power, as its representatives are threatened with prison,” the German Institute for International and Security Affairs’ (SWP) Balkan expert told Spiegel Online.

Whether the government sticks to the agreement then, looks doubtful. Political observers are talking about a “torpedoing” of the deal by the ruling parties. A planned meeting with Hahn in April also fell through. The opposition insisted that their two preconditions for a meeting – withdrawal of the president’s amnesty offer and new elections – had not been fulfilled.

The date for the election has now been postponed with no new date set and the parliament adopted a law last week that amended the way in which amnesty could be granted or revoked. Whether the Gruevski-affiliated Ivanov will bow to the parliament’s de facto ultimatum remains to be seen, but EU membership will stay a distant prospect if things continue how they are.