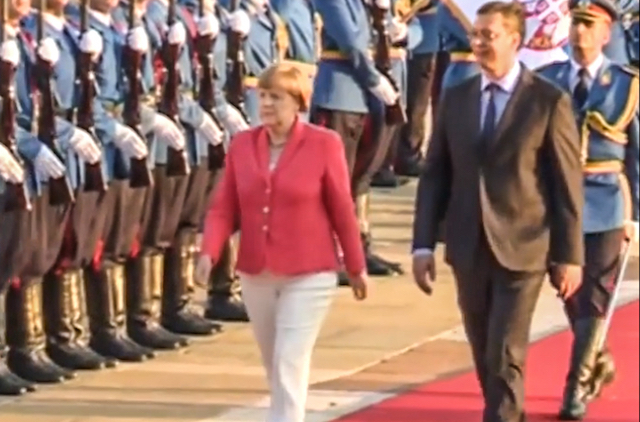 German Chancellor Angela Merkel said in Belgrade on Wednesday (8 July) that Serbia had demonstrated its desire to reach a compromise in its dialogue with Pristina. EURACTIV Serbia reports.

Merkel added that Berlin would keep this in mind concerning the opening of chapters in Serbia’s EU membership talks.

The message was received by Belgrade as an important signal for Serbia’s progress in EU membership negotiations, specifically for the opening of the first chapter, given that Germany believes the negotiations should start with Chapter 35, which deals with the normalization of relations with Kosovo.

“In that respect, I can confirm that he would undoubtedly get involved in the opening of the first chapters for our country” in the membership negotiations with the European Union, Vu?i? said after the meeting with Juncker.

Serbia’s EU negotiations have been stalled since January 2014, when the opening of the accession negotiations was approved by Brussels. The complex issue of normalizing relations with Kosovo, which unilaterally declared independence from Serbia in 2008, is often cited as one of the key reasons for that.

Resolving open issues with Kosovo will be assessed by the EU in Chapter 35 – Other issues, and the improvements measured by the implementation of the agreements reached in Brussels, in the EU-facilitated dialogue.

“Belgrade has demonstrated great readiness to reach a compromise, and I wish to say that we will take that into consideration in the context of opening the first chapters in the accession process. We will truly recognize those efforts,” Merkel said o 8n July , after a meeting with Serbian President Aleksandar Vu?i?.

“It is a question of time when the chapters in Serbia’s negotiations with the EU will be opened,” added Merkel, who previously visited Serbia four years ago, when the decisive demands she made for the normalization of relations with Kosovo surprised the then Serbian government.

The Serbian premier pointed out that Serbia’s three main objectives were the preservation of regional peace and stability, economic reforms and the continuation of European integration.

“I did not beg for money or for opening chapters, I said I thought we had done a lot that was not easy and that was hard and that we expected support,” said Vu?i?.

It was important for Belgrade to hear the opinions of the German chancellor, bearing in mind that the two rounds of dialogue with Pristina in June failed to produce concrete results in reaching a final agreement on four controversial issues, although some progress was made.

The topics discussed in the EU-mediated talks in Brussels on 23 and 29 June were the establishing of the Community of Serb Municipalities in Kosovo, implementation of telecommunication and energy agreements, and the matter of the so-called ‘Peace Park’ in Kosovska Mitrovica, concerning freedom of movement across the bridge that connects the northern and southern parts of the city.

Merkel, who had come to Belgrade from Tirana, also said that there was “a new quality of bilateral contacts” between Albania and Serbia, and welcomed the Serbian prime minister’s efforts toward preserving stability in the region.

Serbian-Albanian relations have been tense in recent months, in attempts at bringing the two countries closer, but despite that, contact has continued, and cooperation has been established in some areas.

The German Chancellor praised the economic reforms in Serbia, which has been carrying out fiscal consolidation measures for the past year.

Merkel said that the situation in Serbia was different from that in Greece, as there was a cabinet willing to be challenged, but that the effort would yield results — like in Portugal and Spain, where austerity measures are also in place.

EU to Help with Migrants

Referring to Hungary’s decision to erect a fence on its border with Serbia, Merkel said there was “no point in putting up walls” and that the European Union would help Western Balkan countries solve their migrant problems.

The EU’s immigration regime “is simply not working anymore”, and is increasingly being “the burden of Serbia, as well as Hungary, which is also a small country,” said Merkel.

“I hope that we will find a solution,” said the German Chancellor.

Vu?i? said that Serbia could not solve the problem of migrants on its own and that it was cooperating with the police forces of Austria and Hungary on a daily basis. He emphasied that Serbia would not be building walls.

This year, 41,864 migrants have expressed the intention of seeking asylum in Serbia, while only 388 have filed an official request.

In the first half of 2015, 20,104 illegal attempts at crossing the state border were discovered, which is around 800% more than in the same period last year.

In the first six months, 7,633 individuals were prevented from illegally crossing the Serbian-Hungarian border and 7,083 misdemeanor charges were filed, threefold more than in all of 2014, said Serbian Interior Minister Nebojša Stefanovi?.