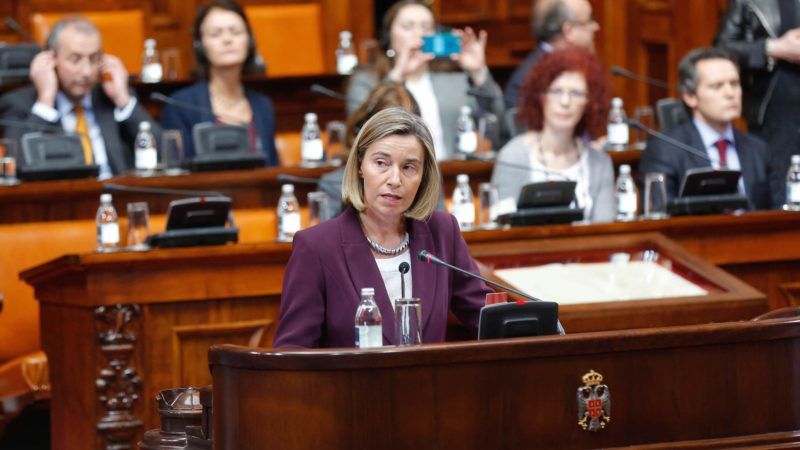 Mogherini speaks in the Serbian parliament on 3 March. [Commission]

From 2 to 4 March Mogherini visited all six Western Balkan countries – Montenegro, Macedonia, Serbia, Albania, Kosovo and Bosnia Herzegovina. She will report to the EU summit on 9-10 March.

For the first time, it looks like the accent will not be so much on the progress of the Western Balkans towards EU accession, but rather on the geopolitical threats facing the region. A summit dedicated to the Western Balkans will take place in Trieste on 12 July.

Several EU leaders have expressed alarm at problems there, with some blaming Russia for attempting to destabilise the region, EU officials say.

On 2 March, Mogherini landed in Montenegro, the clear frontrunner in terms of its EU accession talks.

Since the 16 October 2016 election, when 20 people were arrested for planning to carry out a coup d’état, tensions have built up in the small Western Balkan country. The opposition has since boycotted parliament.

Mogherini told Prime Minister Duško Marković that it was for Montenegrin politicians to find a solution to the political stalemate. In a separate meeting, she urged opposition leaders to return to parliament. Diplomats believe that Russia has heavily invested in the pro-Serbian opposition.

On the same day Mogherini visited Macedonia, a country in even deeper political crisis.

Macedonia’s opposition leader Zoran Zaev accuses President Gjorge Ivanov of fomenting a “coup d’état” by refusing to give him the mandate to form a new government.

Zaev, the leader of Macedonia’s Social Democrats, was expected to form a new government after striking an agreement with the biggest Albanian party over a law backing broader use of their language in the country.

Mogherini asked the president to reverse his decision in the interest of all citizens of this country and to give the mandate to Zaev. At a press conference in Skopje, she warned political leaders to tone down the rhetoric and “avoid making political and institutional crisis an inter-ethnic conflict, or even worse a geopolitical conflict”.

Russia accuses Albania, NATO and the EU of trying to impose a pro-Albanian government on Macedonia.

The party VMRO-DPMNE, led by Nikola Gruevski, who was in power from 2006 to 2016, is increasingly perceived by Western diplomats as being a guardian of Russian interests. Up to now Gruevski has enjoyed support from the European people’s Party (EPP), to which his political force is affiliated.

From Skopje, Mogherini flew to Belgrade, where nationalist Serbian lawmakers booed her when she addressed the country’s parliament on 3 March.

Playing down the heckles during a speech that focused on the EU accession talks which Serbia hopes to complete by 2019, Mogherini later told reporters: “It is not nice to be rude to a lady!”

Prime Minister Aleksandar Vučić’s pro-EU coalition has a comfortable majority in parliament but the popularity of pro-Russian nationalists is on the rise. In 2016, the Radicals returned to the Serbian assembly after an absence of several years.

“Divisions are always there and they can be used or misused politically or ideologically,” Mogherini told Vučić.

The EU has made Serbia’s accession conditional on normalising its ties with Kosovo but tensions have been on the rise this year. Serbia’s ally Moscow refuses to recognise the 2008 independence of Kosovo, which has an association agreement with the EU.

A genocide lawsuit that Bosnia lodged against Serbia at the International Court of Justice angered Bosnian Serbs as well as officials in neighbouring Serbia.

From Belgrade Mogherini flew to Tirana, where the opposition is boycotting parliament, defying an appeal from the European Union not to disrupt parliamentary approval of judiciary reforms vital to starting EU accession talks.

The Democratic Party’s two-week-long protest in a tent outside Prime Minister Edi Rama’s office and its boycott of parliament have stalled the creation of bodies that would vet 750 judges and prosecutors. Reform of the judiciary is a key condition set by the EU for starting accession talks.

The ruling coalition had offered to sit down for talks with the Democrats, who want a technocratic government to take over before free parliamentary elections on 18 June.

Mogherini told NATO member Albania it had a real chance of clinching accession talks once the vetting process started.

“I have been very clear in saying that those who seek to delay and dilute key reforms are putting the European Union integration agenda at risk,” she told a news conference.

“Boycott of the parliament means blocking the establishment of the (judicial) vetting commissions and de facto stops Albania’s progress towards the European Union.”

Her comments were rejected by Basha, who said: “They (the EU) should keep the rubbish to themselves.”

From Albania Mogherini visited Kosovo on 4 March, where she urged the opposition to ratify a border demarcation agreement with Montenegro, the last remaining hurdle before it can benefit from visa-free travel to Europe’s Schengen zone.

She commended Kosovo’s leaders for their “constructive stand” in lowering recent tensions with Serbia.

“It’s time to vote for the ratification of the agreement. That would release the visa liberalisation for the people of Kosovo,” she said at a news conference with Prime Minister Isa Mustafa.

Mogherini urged opposition political parties to renounce their political interests “and work together for the reconciliatory path to take the country ahead.”

The country’s opposition has prevented parliament from voting on the border agreement with Montenegro, and another deal with Serbia that gives more powers to ethnic Serbs in Kosovo.

Relations between Kosovo and Serbia have been tense following a series of incidents over the past months. Mogherini last month summoned Kosovo’s and Serbia’s presidents and prime ministers twice to Brussels.

EU diplomats suspect geopolitical games behind the failure to ratify the border agreement with Montenegro. As a prospective NATO member, Montenegro is expected to solve all its territorial problems with its neighbours.

The last stop on Mogherini’s  Balkan tour was Sarajevo, the capital of Bosnia and Herzegovina, a country badly divided by ethnic tensions. Significantly, the leader of the country’s Serbia entity (Republika Srpska) Milorad Dodik snubbed the call with Mogerini, saying that he needed to travel to Moscow “for a very important meeting”. The EU believes Moscow is encouraging Bosnia’s Serbs to seek independence.

Serbs in Bosnia are set to hold a deeply divisive holiday on Monday (9 January), a date tied to the fragile nation’s brutal 1990s war and a sensitive issue for other ethnic groups.

At their summit, EU leaders are expected to reaffirm their commitment “to support stability and to deepen political and economic ties with and within the region,” according to an early draft of their joint statement.