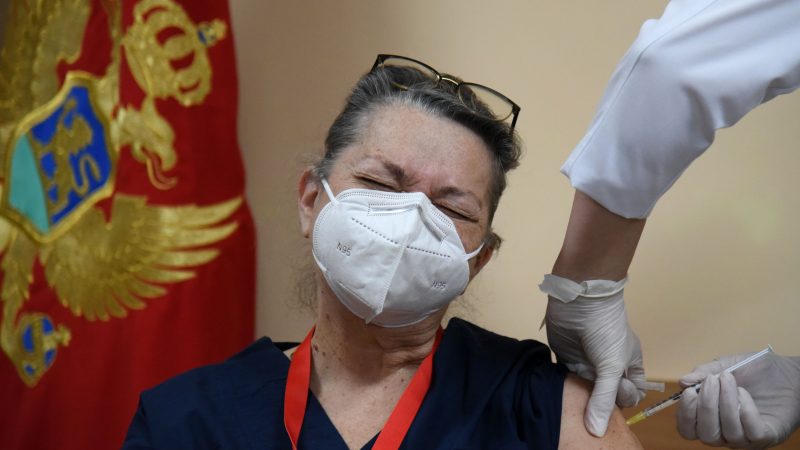 A health worker receives the Sputnik V vaccine against COVID-19 during a vaccination day to the medical staff of the Clinical Center of Montenegro in Podgorica, Montenegro, 23. February 2021. [Boris Pejovic/EPA/EFE]

Montenegro appealed to the European Union and NATO to send it medical workers to help exhausted health services battle a surge in the COVID-19 pandemic in the tiny Adriatic nation, its leading newspaper reported on Wednesday (10 March).

So far 1,902 people in the ex-Yugoslav republic of 620,000 have died from COVID-19 while 80,803 have contracted the respiratory disease. On Tuesday it reported 612 new infections, bringing the total of those currently ill to 9,063.

Montenegro, a member of NATO and candidate to join the EU, began inoculating its population with Russia’s Sputnik V vaccine on 20 February but has struggled to contain COVID-19 contagion.

In a letter made available to the Podgorica daily Pobjeda, Montenegro’s foreign minister asked NATO and EU counterparts to send medical staff to shore up the country’s overstretched health services.

“Your help, within the realm of possible, would be extremely important,” the newspaper quoted Djordje Radulovic as saying.

Radulovic and officials in the Foreign Ministry could not be immediately reached for comment.

Montenegro, whose economy depends mainly on revenues from its Adriatic tourism, is enforcing an overnight curfew between 9 p.m. and 5 a.m. and ordered people to stay within boundaries of most municipalities to help curb coronavirus transmissions.

On Monday, President Milo Djukanovic urged the government to introduce a stricter lockdown and seal the nation’s borders as additional steps to curb the spread of the virus.