A Montenegro court is set Thursday (9 May) to deliver verdicts to 14 people accused of planning to violently overthrow the government with Russian help in 2016, an alleged plot whose details remain murky even after a lengthy trial.

The defendants include two pro-Russian opposition leaders, Andrija Mandić and Milan Knežević, who risk up to eight years in prison if convicted on charges of being members of a criminal group that planned the coup.

Several Serbians are also among the defendants, including a former police general, as are two Russian men presented by prosecutors as intelligence officers who are being tried in absentia.

According to the special prosecutor, the foiled plot was an attempt to prevent the small Balkan country from joining NATO, a move Moscow opposed at the time.

Moscow has denied any involvement.

Prosecutors also allege there was a plan to assassinate current president and then prime minister Milo Djukanović, the strongman of Montenegrin politics who has led the country since 1991.

Since the trial opened 19 months ago, Montenegro’s pro-Russian opposition has decried it as a government-backed “witch hunt” aimed at destroying their political camp.

Their coalition, the Democratic Front, was the main opposition force against Djukanović and his party at the time of the coup allegedly planned on the day of October 2016 parliamentary elections.

“Without this so-called coup d’état, the regime would certainly be in opposition today,” opposition leader Mandić said at the trial’s close.

He accused Djukanović of taking advantage of a “wave of anti-Russian hysteria to attack” his opponents.

Prosecutor Saša Čadjenović says the 14 on trial belonged to an “organised criminal group operating according to well-defined rules, with internal control and discipline”.

But many questions remain after the months of court proceedings.

The weapons that the plotters allegedly planned to use were never shown in court.

According to the indictment, dozens of cases of automatic weapons and three cases of ammunition were thrown into a lake in a neighbouring country, though it did not name which one.

Prosecutors later said that a Serbian who provided the weapons ultimately destroyed them at the request of Montenegrin justice.

Not all observers are convinced.

“Without these weapons, the story of a violent overthrow of power is unconvincing,” the lawyer told AFP, saying the prosecution did not provide “solid material evidence” during the trial.

In another curious incident, one of the prosecution’s key witnesses, Serbian national Aleksandar Sindjelić, reversed his testimony.

Sindjelić initially told the court the Democratic Front was “financed by money from Russia” that would have aided the coup.

But in March, just before the end of the trial, he told a Serbian television channel that there had been no “plan of violence in Podgorica”, only an anti-NATO “protest”.

The court did not bring him back to the witness stand, saying his reversal was expressed outside any judicial framework.

In the years since the alleged coup attempt, Djukanović was elected President in 2018, Montenegro joined NATO and the government continued its negotiations for accession to the European Union.

Ahead of the verdict, the Democratic Front warned that a conviction of its leaders would risk “irremediably destabilising Montenegro”.

The government is currently facing regular demonstrations by protesters accusing it of corruption and authoritarianism. 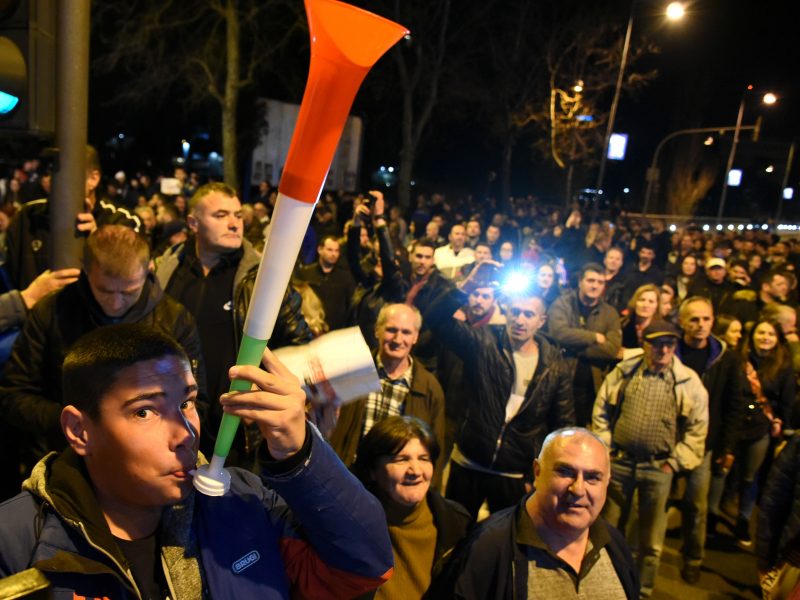 Djukanović has dominated Montenegro’s politics from the 1990s onwards, when late strongman Slobodan Milosevic installed him at the helm of the former Yugoslav republic.

But he went on to lead Montenegro’s independence in 2006 and made a strategic decision to turn towards the West.