The change, which Greece demanded to end what it called an implied territorial claim on its northern province of Macedonia, resolves a decades-old dispute and opens the door to North Macedonian membership of NATO and the European Union.

But the accord continues to divide Macedonians and has eclipsed all other issues during campaigning for Sunday’s election, in which about 1.8 million voters were able to chose among three candidates. 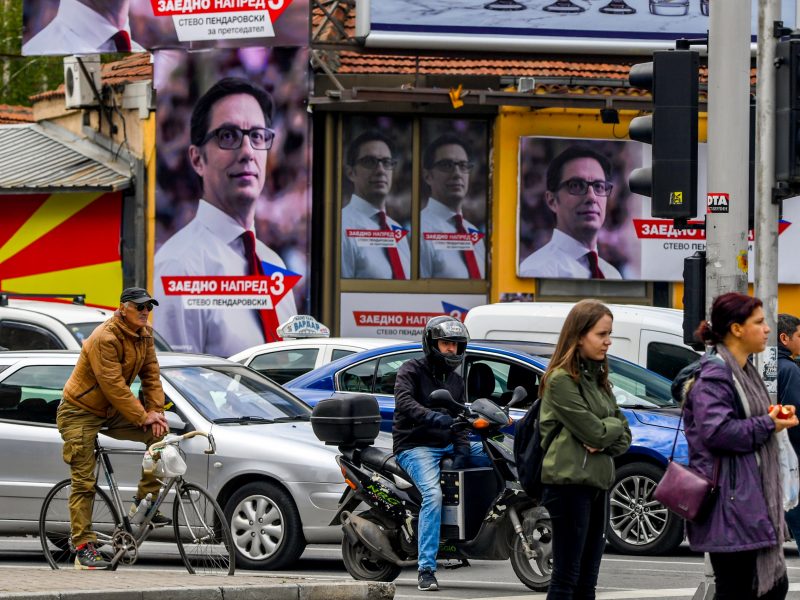 North Macedonia holds the first round of its presidential election on Sunday (21 April), the country’s first vote under a new name as it struggles with enduring economic problems, cronyism and corruption.

Results on the State Election Commission website based on 98% of the votes counted showed Pendarovski got 42.7% of the votes, while Siljanovska-Davkova had 42.5%.

The results illustrated a sharp split in loyalties among the population, as well as widespread apathy in a country where corruption and cronyism has eaten away at faith in politics.

The two will face a run-off on 5 May, reflecting differences over the deal pushed through by the pro-Western government of Prime Minister Zoran Zaev.

Blerim Reka, the candidate of the second largest Albanian party, came third with 10.4% of the votes.

Polls opened at 7 a.m. local time (0500 GMT). The State Election Commission put turnout at 41.9%, barely passing the 40-percent threshold that will also be required to make the runoff on 5 May valid.

Both Zaev’s Social Democrats and the opposition VMRO-DPMNE proclaimed victory.

“I am convinced that in the second round we will have a European president of our state,” Zaev told journalists late on Sunday.

This election is about voting to move the country forward, he said.

“We won,” said Hristijan Mickoski, leader of the opposition VMRO-DPMNE, which supported Siljanovska-Davkova. VMRO-DPMNE opposed the deal with Greece.

Analysts said the low turnout was down to disillusion among voters at the government’s lack of progress in attracting foreign investment and tackling high unemployment.

“We need a new and better president, a nation’s father that will help move this country forward,” said Sonja Kjurcieva, a 49-year old housewife from Skopje.

“Together with the government they will bring us closer to Europe.”

The presidency has no authority to block constitutional amendments that were passed earlier this year by a two-thirds majority of parliament to enable the name change.

OSCE election monitors said the election was free and “well run”, but called for reforms that would reduce barriers to voting, including the automatic exclusion of those with expired identification documents.

“The delegation regrets that the turnout was low for a presidential election. A mature functioning of the political system and a reform of the electoral law would re-engage citizens and ensure their active participation,” Marie-Christine Dalloz, head of the delegation from the Parliamentary Assembly of the Council of Europe (PACE), said in a statement.

Pendarovksi said the vote will be for how the country’s future will be shaped rather than a choice of president.

“I expect to win the elections and be the first woman president of Macedonia,” Siljanovska-Davkova said after casting her vote.

“I am a professor of European law, so I’ll respect (the agreement with Greece),” she said. “But I’ll do my best to show that some of the solutions are against our constitution.”

The presidency of the former Yugoslav republic is a mostly ceremonial post, but acts as the supreme commander of the armed forces and signs off on parliamentary legislation.

The refusal of outgoing nationalist President Gjeorge Ivanov to sign some bills passed by parliament has delayed the implementation of some key laws, including one on wider use of the Albanian language – 18 years after an ethnic Albanian uprising that pushed North Macedonia to the brink of civil war.