People wait at the traffic light in front of the billboards of Presidential candidate Stevo Pendarovski from the ruling SDSM in Skopje, North Macedonia, 18 April 2019. [Georgi Licovski/EPA/EFE]

North Macedonia holds the first round of its presidential election on Sunday (21 April), the country’s first vote under a new name as it struggles with enduring economic problems, cronyism and corruption.

The vote for the largely ceremonial post comes less than three months after a deal with Athens on Skopje’s name change came into force, ending a decades-long identity dispute between the neighbours.

The spat was sparked by the country’s independence from Yugoslavia in 1991, when it declared that it wanted to be called Macedonia, over the objections of Greece, which has a northern province of the same name. 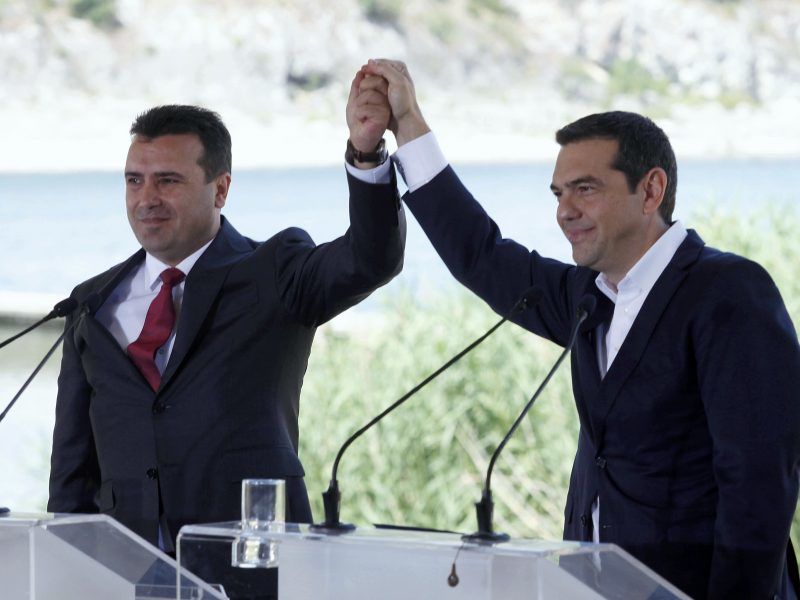 The agreement was finalised in January after a long political battle and fierce opposition from nationalists on both sides of the border.

In exchange for the name change, Athens said it would stop thwarting North Macedonia’s bid to join NATO and the European Union.

Skopje hopes to open accession talks with the EU in June — but analysts say the country’s 1.8 million-strong electorate are more concerned with bread-and-butter issues.

“I hear only about NATO, the European Union and this name story,” sighed Vera Smajlovska, a Skopje hairdresser.

“No one cares about the way people live. They care only about power, what remains to be grabbed in this poor country,” the 47-year-old told AFP.

The average monthly salary in North Macedonia is €400, and the official unemployment rate exceeds 20%, according to the national statistics agency.

Many voters, called to choose among three candidates, will want to “send a message to those who do not want to hear it,” said political analyst Arsim Zekolli.

“Citizens feel manipulated by everyone and are dissatisfied,” said Meri Jordanovska, an investigative reporter. “We cannot continue to serve them the story of EU and NATO forever,” she told AFP.

Even among those who have accepted the name change, many have done so reluctantly, convinced by the promises of rapprochement with the EU — a shift they hope will bring prosperity and strengthen the rule of law.

The candidate of the ruling Social Democrats (SDSM) Stevo Pendarovski, 56, insists on a EU agenda.

If Pendarovski loses, or if the turnout is lower than the 40% required for the vote to be valid, Zaev would suffer a body blow.

Such an outcome could lead to early parliamentary elections and spell new instability in the volatile Balkans country.

Reka, a 59-year-old law professor, has sought to cast her net beyond her base of ethnic Albanians, who account for 20 to 25% of North Macedonia’s population of about two million.

Pendarovski has a slight lead in voter surveys in the race for a successor to incumbent nationalist Gjorge Ivanov, who is barred from standing again after two five-year terms.

But the polls — though widely considered unreliable — forecast a second round, due on 5 May, between Pendarovski and Siljanovska-Davkova.

The latter, a 63-year-old lawyer opposes the country’s new name but had said she would “respect” the deal if elected.

Siljanovska-Davkova has another angle of attack.

“Youths are leaving the country only because of corruption, because we have people in power who think only about jobs and the future of their own children at the expense of the state budget,” she told a rally in the central town of Veles on Sunday.

Reka also warned that the “fatigue of institutionalised corruption, nepotism” was prompting emigration.

“If we fail to build a republic based on the rule of law, we will end up in an empty country,” he told an electoral rally on Sunday.

The family of 50-year-old plumber Janko Velkovski illustrates the risk.

His son has emigrated to Germany, while his daughter, a nurse, wants to join him.

“When I hear the candidates talking about the future of youth, it literally turns my stomach,” said Velkovski, who lives in a Skopje suburb.

North Macedonia lost a quarter of its population between 2000 and 2015, according to the World Bank.