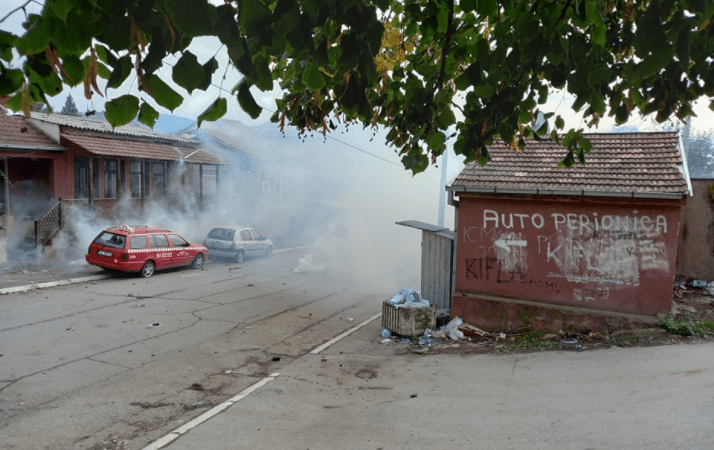 On Wednesday, Kosovo police launched an anti-smuggling operation throughout the country. In northern Mitrovica, a town inhabited by a Serb majority, they were attacked with guns and bombs, the police announced. [@ExitExplains Twitter]

One Serb was shot and six police officers injured on Wednesday (13 October) when police fired tear gas to disperse a crowd that became hostile after raids on suspected smugglers in a volatile area of Kosovo populated by the Serb minority.

Kosovo police said officers met resistance in Mitrovica as they carried out an operation to seize smuggled goods in several towns on Wednesday.

A nation-wide anti-smuggling operation was met with attacks against the police by Kosovo Serbs in the northern part of the country, resulting in six injured police officers. https://t.co/JKB3TOAqag

A number of #Kosovo Serbs from the area burned 2 cars & blocked one of the main roads in the city. At least one of the cars was of the customs office.

5 of the injured police officers are of Albanian ethnicity, one is a Serb. #Prishtine #Peja #Mitrovica pic.twitter.com/SDz4BPyhOZ

Similar clashes were reported in the nearby town of Zvecan.

The European Union’s foreign policy chief Josep Borrell called for an immediate end to violence in Kosovo’s north, adding that all “open issues must be addressed through the EU-facilitated dialogue” between Belgrade and Pristina.

The violent incidents in the north of Kosovo need to stop immediately.
Unilateral and uncoordinated actions that endanger stability are unacceptable.

All open issues must be addressed through the EU-facilitated Dialogue. We are in contact with Belgrade and Pristina.

Belgrade and Pristina agreed to an EU-sponsored dialogue in 2013, but little progress has been made.

The Kosovo Online news portal quoted Zlatan Elek, the head of a hospital in Mitrovica, as saying one person was seriously injured.

“The injury to the shoulder blade and ribs has been caused by a firearm … He is in intensive care and is in serious condition,” Elek was quoted as saying.

Serbian President Aleksandar Vučić left Belgrade to go to the central Serbian town of Raska to meet representatives of Kosovo Serbs later in the afternoon, his office said.

Serbian Prime Minister Ana Brnabić urged NATO, which has 3,000 peacekeepers in Kosovo, to step in and stop the violence.

Kosovo’s Prime Minister Albin Kurti said: “Crime and criminal groups will not be tolerated and will be fought. We will fight and stop the smuggling.”

Kosovo declared independence from Serbia in 2008, but around 50,000 Serbs who remain in the northern part of the country refuse to recognise the Pristina authorities and see Belgrade as their capital.